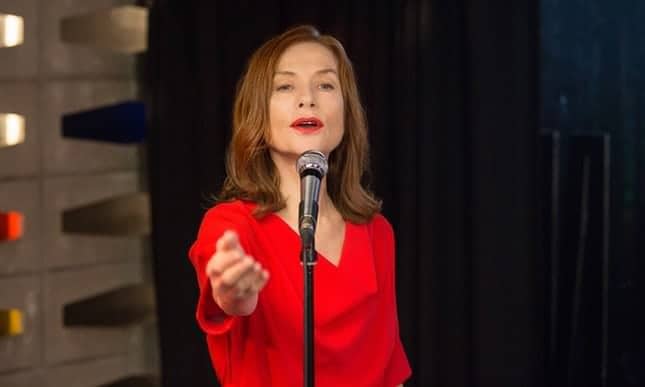 With a brazenly cocksure attitude, cult Belgian filmmaker Bavo Defurne’s disappointingly innocuous sophomore feature, Souvenir, begins with a credits sequence that plays against a lively backdrop of sparkling effervescence. Coupled with the starry-eyed score, composed by American pianist Thomas Lauderdale’s ‘Pink Martini’ music group, it’s a film that promises its audience plenty of fizz and flavour, but instead offers them something that’s flat and tasteless.

A strong, seasoned performance from Isabelle Huppert is just about enough to make it all palatable. She plays Liliane, once a rising star and Eurovision finalist who drifted into obscurity many years ago. Now she spends her days working on the production line of a pâté factory, and her evenings in a state of solitary ennui sipping whiskey whilst watching trashy late-night telly.

Salvation is presented in the form of Jean (Kévin Azaïs), an aspiring boxer who works alongside Liliane and soon recognises the former chanteuse. Besotted by both her talent and her beauty, Jean becomes infatuated with his co-worker, and though she is hesitant at first, the pair soon embark on a passionate love affair – much to the chagrin of the boy’s mother – and begin making plans to rejuvenate Liliane’s fading musical career.

Huppert communicates her character’s vulnerability with an assertive prowess that provides what is an idle script with some much-needed emotional insight, but it isn’t enough to detract from the film’s considerable flaws. Despite taking a clear visual cue from the vividly alluring work of pop culture artists Pierre et Gilles, Souvenir is significantly lacking in vibrancy; the irresistible sweetness of its candy-coloured design spoiled by the woefully drowsy direction. Indeed, so consumed is the plot by cloying romantic idealism that never are we afforded the opportunity to feast on the more meatier aspects of Liliane and Jean’s intergenerational relationship, Defurne seemingly content with serving us something that more closely resembles a dog’s dinner.

Souvenir is in cinemas from Friday 23rd June.