Next up in a line of sequels that were never needed comes Independence Day Resurgence. Roland Emmerich returns on directorial duties desperately attempting to recapture the magic of the first film and failing spectacularly. This is the sequel to 1996’s blockbuster event film, this time around losing Will Smith in favour of new comers to […] 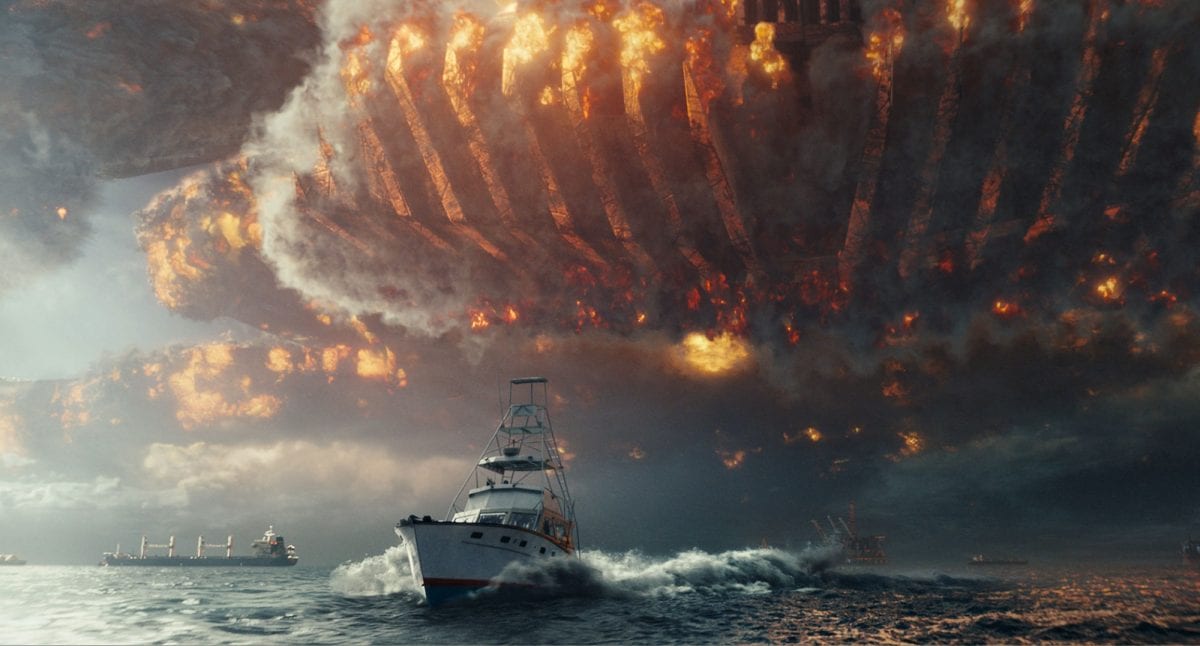 Next up in a line of sequels that were never needed comes Independence Day Resurgence. Roland Emmerich returns on directorial duties desperately attempting to recapture the magic of the first film and failing spectacularly.

This is the sequel to 1996’s blockbuster event film, this time around losing Will Smith in favour of new comers to the franchise – Liam Hemsworth as Jake Morrison and Jessie T. Usher as Dylan Hiller – son to Will Smith’s Steven Hiller. Unfortunately Will Smith opted to not return for this outing, with his character subsequently killed off screen. Sitting through the film, I can hazard a guess as to why he didn’t return.

Set twenty years after the first film, Resurgence sees the aliens return in order to bring vengeance upon the human race and wipe us out once and for all. Fortunately David Levinson (Jeff Goldblum) is now heading the Earth Defence Force and has continued to investigate alien activity and the aftermath of the previous attack. The human race has bound together and retrofitted the downed alien technology in preparation for their inevitable return. Now the premise is solid enough – its not as if this follow up needed a riveting script and I enjoyed the initial trailers, preparing myself for a couple of hours of CGI-fuelled, dumb fun.

I dreaded Liam Hemsworth’s addition to the franchise as the new lead and fortunately he proved me wrong. For the most part he’s a solid point of entry for the audience, feeling the need to prove himself in earths defence having lost his parents in the last attack. He’s warm, charming and pretty easy to like. The wheels come falling off with Jessie T. Usher’s portrayal of Dylan Hiller. With a film like Resurgence I don’t expect well-developed characters – we just want the main players to exude wit, charm and charisma; something Will Smith brought in spades. But Usher has about as much charisma as the bland and lifeless CGI alien army. Director Roland Emmerich gave him an impossible task in attempting to succeed Smith, but Usher struggles alongside other more accomplished actors. His teary eyed speech in the third act is borderline laughable. Rounding out the newcomers is Maika Monroe playing the daughter of ex-President Whitmore (Bill Pullman). She is solid enough and has a moment or two to shine just as I was beginning to feel that she’d be forced to sit out the final attack.

That brings me to the returning cast and boy are they a mixed bag. I wanted this to be Jeff Goldblum’s triumphant return to the big screen and for the most part he’s solid, bringing sardonic charm to the screen. There are a few scenes where he doesn’t seem particularly engaged and they stand out like a sore thumb but he’d certainly have been missed if not present. Bill Pullman is excellent as President Whitmore – a man now fractured both physically and mentally since the events of the first film. Whilst we don’t get a speech from him that’s as iconic as the one from ID4, he still lends gravitas and continuity to proceedings.

And then there’s everyone else – Dr. Brakish Okun (Brent Spiner) and Julius Levinson (Judd Hirsch) both making unnecessary returns as caricatures that just distract in every scene they feature in. There’s a whole side plot involving Julius Levinson driving orphaned kids around that seems tacked on in order to give the character something to do.

After that huge set piece it just becomes generic aerial battle after aerial battle with poorly designed ships and weapons, creating a blur of CGI metal evocative of the visual mess of Michael Bays Transformers franchise. The CG swings from top of the line to cheap looking within the same scene and the miniatures present in the first film are sorely missed here. We just can’t care about these generic characters and their generic mission in their generic ships. And don’t get me started on the Alien Queen chasing after a schoolbus like a dog desperate for a ball. I chuckled at that one. Nothing feels real and the stakes are non existent – a far cry from the original

Is there fun to be had here? Occasionally, but it’s a shame that the film couldn’t successfully fill its quota of ‘dumb fun’. It’s all we asked of it and their attempts to expand the mythos of this world just serves to over-bloat it and elongate the rather bland proceedings.

The blockbuster has evolved and Independence Day Resurgence feels like a movie event from a bygone era. It seems Will Smith chose wisely to avoid this one.