By Linda Marric Terence Davies never does anything by half, his ultimate devotion to every single subject he touches upon is the very thing which makes him into one of the most honest and uncompromising artists of our time. In A Quiet Passion, Davies delivers a beautifully nuanced and witty account of another uncompromising artist […] 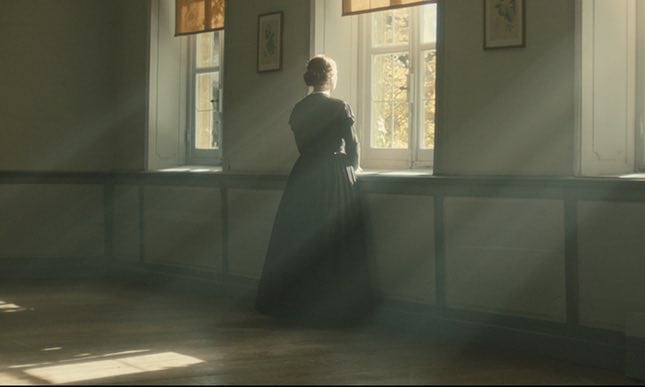 Terence Davies never does anything by half, his ultimate devotion to every single subject he touches upon is the very thing which makes him into one of the most honest and uncompromising artists of our time.

In A Quiet Passion, Davies delivers a beautifully nuanced and witty account of another uncompromising artist whose success only came to light after her untimely death. Emily Dickinson first featured in Terence Devies’ work in his now iconic poetic love letter to his native Liverpool Of Time And The City (2008), in the film Davies himself can be heard reciting Dickinson’s Poem 301.

Staring Cynthia Nixon as Emily Dickinson, A Quiet Passion opens in 1840 with the poet as a bright, yet taciturn teenage student (played by Emma Bell as young Emily) at a rigid and deeply religious boarding school. Accompanied by her sister Vinnie and brother Austin, Emily’s father Edward Dickinson (Keith Carradine) arrives unannounced at the school to take her back home to her ailing mother. Already an accomplished writer, young Emily spends her time writing and sending poems to an array of publications which seldom get back to her. Unfazed by the lack of interest, Emily soldiers on regardless and becomes a highly prolific writer.

As the years pass, we find Dickinson still living at home with her parents, her sister Vinnie (Jennipher Ehle) and brother Austin (Duncan Duff). Spurred on by a new friendship with the outrageously outspoken Miss Vrylling Buffam (Catherine Bailey), Emily becomes more outgoing and vocal about her views on religion and the clergy. To her father’s dismay, she rebels against the church by refusing to kneel while praying. Despite her inner turmoil, Emily remains loyal to her family especially her ailing mother to whom she feels duty-bound and whom she nurses until her death. Nixon, for whom Davies specifically wrote the part, is sublime as Emily. Her passivity and at time silent seething anger at the world, is handled with great gusto.

Catherine Bailey as Miss VB is a joy to watch, her scene-stealing performance injects some much needed lighthearted relief into a narrative which can at times feel a little sombre. Davies’ playful and witty dialogue is intercut with some beautifully still and lengthy shot, he films everyday life with a huge amount of attention to detail, immersing himself and his audience in this beautiful, yet rigid, American gothic era whilst touching on the usual themes of family, religion and female turmoil.

A Quiet Passion, is a wonderfully crafted and highly enjoyable piece of filmmaking. Terence Davies continues to deliver genuinely challenging work after all these years. With a hugely believable cast and an equally brilliant screenplay, the film is bound to find its audience with the usual Davies aficionados and is sure to convert a whole new generation to his brilliant work.

A Quiet Passion is in Cinemas from Friday April 7th.