By Linda Marric Shot over a three year period, All This Panic is perhaps one of the most comprehensive looks at female youth ever achieved by a documentary film-maker. Director Jenny Page and her cinematographer husband Tom Betterton took on the mammoth task of following a group of girls from New York through some of […] 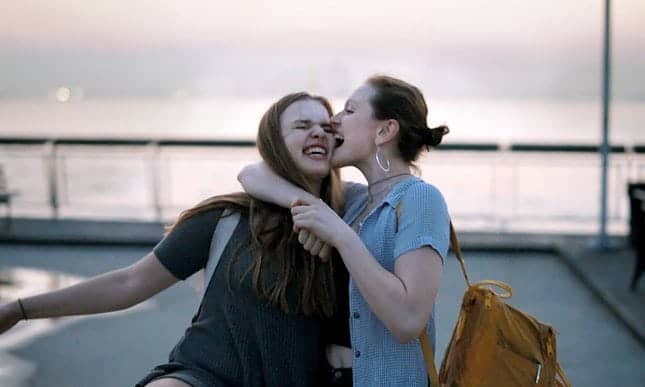 Shot over a three year period, All This Panic is perhaps one of the most comprehensive looks at female youth ever achieved by a documentary film-maker. Director Jenny Page and her cinematographer husband Tom Betterton took on the mammoth task of following a group of girls from New York through some of the most difficult years of their lives. Hormones, mood swings and   tantrums are captured by the director as the girls learn how to navigate around each other, their parents and other adults in their lives.

Perhaps the most impressive thing about All This Panic is the amount of unlimited access granted to Jenny Page to make this memorable piece of cinema verité. The film follows a group of seven girl as they transition from childhood into womanhood and manages to extract way more from them than expected. Using an uncompromising cinematographic style, Page delves into the most intimate aspects of what it is to be a girl growing up in a city as big and as unforgiving as New York.

Page and Betternon got to know siblings Ginger and younger sister Dusty early on in their lives as neighbours. Wannabe actress Ginger is the black sheep of the family, she drinks, takes drugs, and has sex with boys while Dusty is afraid of growing up and leaving the safety of her parental home. Page found herself fascinated by the girls and their group of friends; her main interest was finding out what it’s like to be an teenage girl today without judging or interfering in their daily lives. The teens themselves are a merry band of well-meaning, thoughtful and intelligent girls, at times playing to the camera and bickering incessantly about drink, drugs and boys. Giving the impression of being savvy and streetwise, these mostly middle to upper teenagers, soon start to realise that they are perhaps not as sophisticated or worldly as they would like their parents and other adults to believe.

Although Page makes it clear that her intentions were to follow a group of girls who already knew each other, it is important to point out the fact that most of these girls are from privileged backgrounds. As sisters Ginger and Dusty take centre stage in the narrative, the film is at its best when it follows studious Lena or surfer Olivia around. Lena’s story is perhaps one of the most fascinating of the group, her relationship with her neglectful parents and mentally unstable brother, is one of the most touching accounts in the film. As Olivia struggles with her own sexuality, her honesty is beyond impressive and almost depicts her as older than her years.

All This Panic is a visceral and touching account which is sure to impress as well as move its audience, however the only misgiving one can have against it, is that it sometimes tries way to hard to look cinematic instead of just letting the story play out. On the whole, this is a commendable piece of filmmaking about women and girls and their aspirations and dreams.

All This Panic is in cinemas from Friday March 24th.