By Stephen Mayne @finalreel Some narratives are so obviously constructed to hit a series of emotional highs; the power begins to ebb away. The Olive Tree is like that, marching along a transparently pre-ordained path. And yet it remains a mostly charming experience through the sheer weight of emotion brought to bear by director Iciar […] 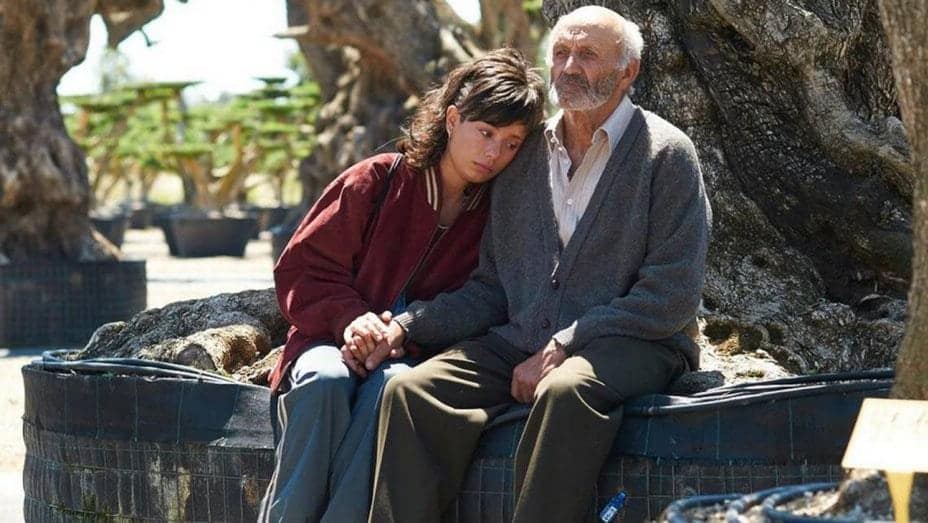 Some narratives are so obviously constructed to hit a series of emotional highs; the power begins to ebb away. The Olive Tree is like that, marching along a transparently pre-ordained path. And yet it remains a mostly charming experience through the sheer weight of emotion brought to bear by director Iciar Bollain and writer Paul Laverty.

The tree of the title plays a vital role in bringing a number of moving parts together, though the crux of the film is Alma’s (Anna Castillo) relationship with her increasingly ill grandfather (Manuel Cucala). Suffering from ever-worsening health, she reaches the decision to retrieve his beloved olive tree, sold out from under him by his son years back. Now it adorns the lobby of an energy company in Dusseldorf.

A madcap road trip in a borrowed lorry takes place, punctuated by diversions into the lives of Alma and those around her. Whimsical music plays out over a number of overhead shots of Alma, her uncle Arti (Javier Gutierrez) and Rafa (Pep Ambros), her wannabe lover, making their way from Spain to Germany. Along the way they have a few forced adventures including the theft of a model Statue of Liberty. It’s all rather fun in a low-key way.

Striving for more finds The Olive Tree thrashing about in deeper water, uncomfortably out of its depth. A number of problems are littered across the running time, from Alma’s fraught relationship with her father Luis (Miguel Angel Aladren) to his relationship with his father, and the wayward Arti stuck under a mountain of debt and an inability to speak frankly with his partner.

Alma isn’t any better, having neglected to tell her companions the tree is with an energy company (they think the owner is a Protestant Minister), and that she doesn’t have permission to take it. Innocence and stubborn earnestness drive Castillo’s performance as she holds the course during weaker spots. Particularly in Germany efforts to contrive drama attempt to burst through. Conversations with contacts in the country are littered with overly descriptive dialogue laying out the choices ahead rather than simply showing them. The same goes for many of the family squabbles that never really add up to much.

Yet despite this tendency to force every moment, there’s something charming about The Olive Tree. Some of it is Castillo’s performance, some of it is the light tread that only occasionally gets tangled up in a convoluted web of family discord. Whatever the mix, it just about works.

The Olive Tree is on general release from Friday 17th March.

Back to normal by summer? It’s possible, SAGE expert says