By Leslie Byron Pitt While Stanley Kubrick’s methodical work ethic produced a low volume of high-quality work, it’s easy to forget that the productivity of a prolific filmmaker can bear equally rewarding fruits. In the space of ten years, Chilean director Pablo Larraín has produced seven features and has only just reached the age of […] 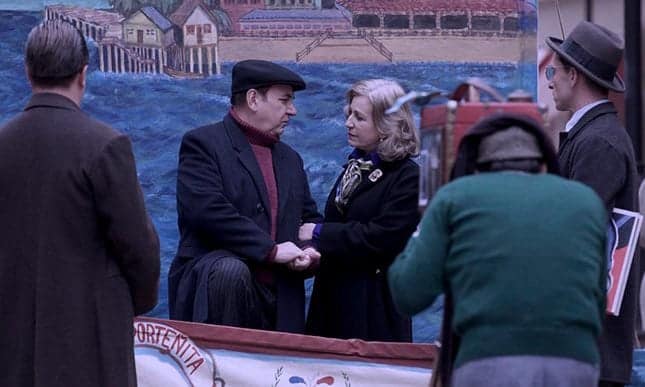 While Stanley Kubrick’s methodical work ethic produced a low volume of high-quality work, it’s easy to forget that the productivity of a prolific filmmaker can bear equally rewarding fruits. In the space of ten years, Chilean director Pablo Larraín has produced seven features and has only just reached the age of 40. The works of Larraín which the writer has seen, have been impactful ones, with each of them leaving a distinct mark as much as some of the entries from the likes of Kubrick were able to make. Despite their lyrical rhythms, Larraín’s films have a potent urgency which makes very new entry a refreshing experience.

That is until Neruda, a beautiful looking but strangely distancing affair which never gets under the skin in the same way Tony Manero (2008) or The Club (2015) does. Not to say that it doesn’t try. Larraín’s dreamy biopic of Chilean’s popular poet and Senator’s exile features much of the Kubrickian elements which made Jackie (2016) such as stand out. The cinematography gracefully glides around Neruda (Luis Gnecco) as he taunts his pursuer; Police Chief Oscar Peluchonneau (Gael García Bernal). Larraín’s use of central framing certainly reminds us of the visuals of Kubrick, as did the claustrophobic way it was used to effectively enclose Natalie Portman’s depiction of Jackie Kennedy. Neruda, like Kennedy, both find themselves confined both psychologically and politically, desperately seeking a way to rediscover themselves in a world that is set against their beliefs.

However, while Portman’s dazzling display as Jackie sees her constantly conflicted from scene to scene, Gnecco’s performance comes across as more straightforward and less interesting. Neruda is perhaps more compelling to those who have a deeper affection and understanding to Neruda’s (and Larraín’s) leftist politics. While Tony Manero and The Club wrap their political leanings around more intense and engaging narratives, Neruda, despite its inviting flights of fancy (the film’s final third play out like a glorious snow filled western) may only truly ensnare those who are more entrenched with the film’s political standing.

Neruda is in cinemas from Friday April 7th.