Wyndham Hacket Pain @WyndhamHP At a time in the year when the cinemas are filled with action blockbusters and superhero franchises it can be easy to overlook films about the seemingly mundane and every day. There is a wonderful humility to The Midwife that has no pretensions and just aims to bring life to a […] 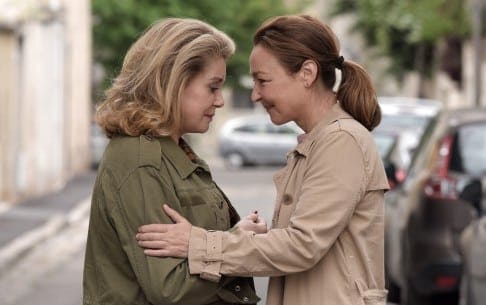 At a time in the year when the cinemas are filled with action blockbusters and superhero franchises it can be easy to overlook films about the seemingly mundane and every day. There is a wonderful humility to The Midwife that has no pretensions and just aims to bring life to a seemingly unremarkable story.

Set in Paris, the film follows single mother and midwife Claire (Catherine Frot) who lives a lonely existence in the city’s suburbs. Her life is injected with chaos when her father’s former mistress Béatrice (Catherine Deneuve) re-enters her life following a terminal cancer diagnosis. Her heavy drinking and impulsive manner makes her the antithesis of Claire and means their relationship is awkward and volatile. Meanwhile, Claire is trying to hold her life together as her medical student son plans to give up his dream of becoming a surgeon to raise a child and as the medical clinic where she has worked most her life is closed down.

Director Martin Provost, who has previously brought us Violette and the excellent Séraphine, does a lot with some pretty familiar elements. Plenty of films, like The Silence (1960), The Kings of Marvin Gardens, Before Sunset, and Paris, Texas, have previously centred around a person returning to someone’s life after a prolonged period away and it would have been easy for Provost to have merely reworked what we have seen before. The Midwife may not be as good as these classic films, but it is still an interesting and heartfelt interpretation of the theme. Provost manages to make proceedings feel genuine and he creates some surprisingly affecting moments.

The director also manages to overcome shortcomings in its lead characters. Béatrice often has some questionable motives and is more often than not drinking and smoking almost without purpose. Claire’s character development on the other hand can feel a bit contrived. The tension and frustration between her and Béatrice is real and their reconciliation happens a bit too easily and quickly. Yet the two leads fill the central roles admirably. Deneuve really brings Béatrice to life and where the script is unable to give her a convincing back story she is able to make up for it. It is Frot though that gives the most impressive performance. She gives Claire nuance and texture, and manages to give a sense that she is restricted by the burden on past experiences.

At its heart The Midwife is a story of family, regret, and forgiveness. There are no real surprises within the film but this doesn’t mean that it should be discarded or overlooked. Instead of pretending to contain a revelatory message, events pan out in a much more humble and earnest manner. It can be easy to forget the value of compassion and friendship at times of confrontation and pain, and even though we may deep down already know their worth it is always nice to receive a reminder as sincere as this.

Despite its familiar story, The Midwife manages to be surprisingly touching and intimate. A good cast and empathetic direction helps the film for the most part to evade cliché and remain heartfelt.

Midwife is in cinemas from Friday 7th July.