★★☆☆☆ Italian director Paolo Sorrentino charts the dealings and plotting of Italian businessman and Prime Minister Silvio Berlusconi in his latest film Loro. The film begins not with the notorious politician but with the young and self-assured Sergio Morra (Riccardo Scamarcio), who traffics escorts and bribes politicians in the small coastal city of Taranto. Sergio […] 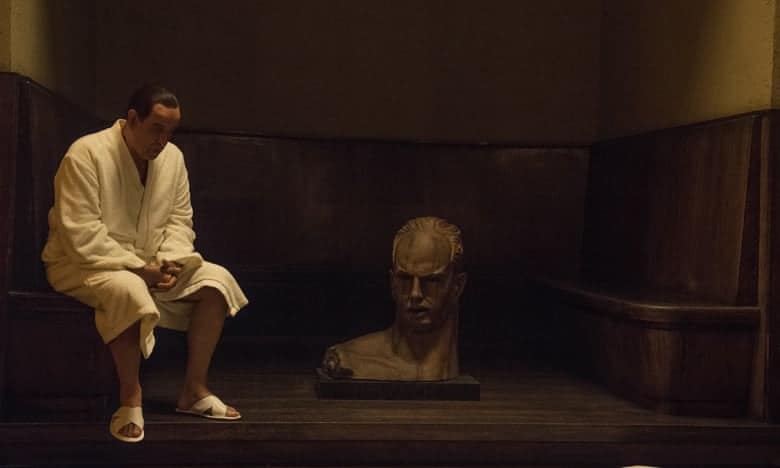 The film begins not with the notorious politician but with the young and self-assured Sergio Morra (Riccardo Scamarcio), who traffics escorts and bribes politicians in the small coastal city of Taranto. Sergio has grand plans and in an attempt to get the attention of the country’s most powerful person he hires a villa next to Berlusconi’s and invites a large group of attractive women to join him.

Next door Berlusconi (Toni Servillo) laments his exit from government and the increasing tensions between him and his wife Veronica (Elena Sofia Ricci). It isn’t long before he has devised a plan to regain power and is back to his usual ways.

Perhaps unsurprisingly, the lure of Sergio’s villa is too strong and he takes a trip to visit him and his guests.

In Italy Loro was released in two acts with a combined length of over three hours. The version that hits British cinemas is the shortened 145 minute international cut. Without seeing the extended film it is impossible to know what happens in the extra hour of footage but what I can say is that the
international cut is full of loose ends and characters that are seen once but never reappear.

Even Sergio, who has almost as much screen time as Berlusconi, feels surplus. It is hard to know what his inclusion demonstrates that isn’t illustrated by Berlusconi himself. After the two hour mark I began
to lose interest as each subsequent scene merged together to create an incoherent and disjointed mess.

Very little of Loro feels essential which is a shame as the film does contain a couple very revealing insights. In the film’s best scene, Berlusconi speaks with Italy’s 19th  richest person about helping others so that you can help yourself more. It is a philosophy that sees altruism and populism
as a way of covering corrupt self-interest.

At its best Loro acts as a warning for what happens when a salesperson assumes power. Berlusconi professes to sell dreams which act as a smokescreen for his backhanded dealings. It is hard not to make comparisons with the self-professed deal maker residing in the White House.

These similarities seem to be intentional with Berlusconi claiming, in remarks similar to those made by the American President, to be a self-made man who only inherited £30m lire even if the figure is believed to be more than five times higher.

While it fails to reach the heights of Paolo Sorrentino’s best work, Loro feels like a microcosm of the director’s career. The film feels in equal parts seductive, thrilling, revelatory, speculative, haphazard, and indulgent.

Compared to Il Divo and The Great Beauty his latest effort feels like a detour or even a missed opportunity.

It is easy to admire the audacity of Sorrentino for turning his attention to a character that represents the antithesis of every recent cultural trend. Maybe somewhere in the mythology of the scandalous Silvio Berlusconi there is a story that cohesively highlights the corruption and self-interest of the political elite. Unfortunately somewhere in its two and a half hour running time Loro loses its way.