By Stephen Mayne @finalreel The treatment of refugees is still an ignored problem. Whether the West is directly or indirectly involved – and given the long tentacles of history, it’s usually one of the two – the fate of those left to bear the brunt of chaotic violence and repression is rarely given attention. The […] 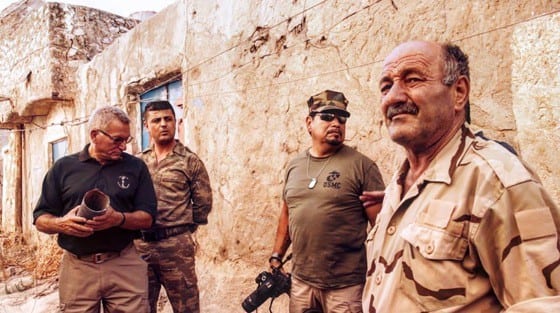 The treatment of refugees is still an ignored problem. Whether the West is directly or indirectly involved – and given the long tentacles of history, it’s usually one of the two – the fate of those left to bear the brunt of chaotic violence and repression is rarely given attention. The Longest Road is an attempt to remedy this, and while repeatedly falling prey to muddled thinking, it gamely grapples with a complex subject.

Clocking it at two hours, Matthew Charles Hall and Jennifer Salcido’s film never rushes forward. ISIS and the chaos they create is the chosen subject matter. A measured start takes us via an overview of Kurdistan, the Armenian genocide, and the first Gulf War before moving to ISIS.

A film more eager to dive in might head straight to the frontlines, but The Longest Road is playing a different game. Having provided a concise overview, the action moves to America where a number of players – chief among them Richard Campos – are introduced. He’s the heart of the story; a fascinatingly open-minded campaigner. An ex-marine who fought in Iraq; he set up an organisation to provide medical supplies to the country in the name of a deceased friend’s son who was killed in combat. The film follows Campos and a number of others he met on the veteran circuit, as they travel to ISIS frontlines.

Some of this is alleviated as the film captures the group undergoing their own epiphany. They meet Nemam Ghafouri, a Muslim doctor who visits bi-monthly from Sweden. They also stumble across Yazidi refugees, an ethno-religious group who are being methodically hunted down by ISIS. Eyes begin to open to the plight faced by everyone, and the group switches their attention, determined to open the eyes of others back home.

The awakening is carefully coaxed from a narrow to a broader understanding of all the lives under threat. Still, attentions flit between bigger picture and small. Several comments keep coming back to Christianity and the general sense of wonder the visitors feel to be out there. The Longest Road doesn’t always seem to know if it wants to tell a story about them or the world they’ve wandered into.

The final word is left with Campos though, an agnostic who simply wants to help. After spending the day with excited children, he’s able to step back and recognise that much as they’ve enjoyed having visitors, what they really need is education and infrastructure to get them on their feet again. It’s because of him the two different focuses just about meet in the middle.

The Longest Road premiere’s at London’s Dalston Rio on Saturday 18th February at 12.

Tickets for the screening are just £8, with additional donations encouraged for a project to build a school for Kurdish Yezidi children.