Landscape of Horrors By Michael McNulty Imagine being trapped in your car, stalked by a truck down endless highways, or chased through the Louisiana swamps by a vengeful group of Cajun hunters. Being stuck in the middle of nowhere, fighting for survival, having to keep your wits about you in landscapes that seem to do […] 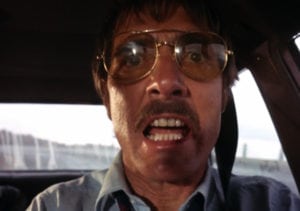 Imagine being trapped in your car, stalked by a truck down endless highways, or chased through the Louisiana swamps by a vengeful group of Cajun hunters. Being stuck in the middle of nowhere, fighting for survival, having to keep your wits about you in landscapes that seem to do nothing but steal your wits from you. Here are five films that do the imagining for you. 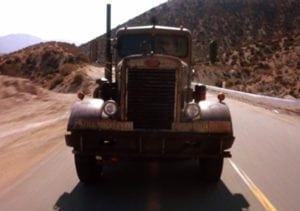 Duel, Stephen Spielberg’s first feature length film, is a wonderfully taut thriller that follows businessman David Mann as he is terrorized by an 18 wheeler, whilst on a work commute. Originally made as an ABC TV movie of the week, the film picked up a lot of attention and in 1973 garnered a theatrical release in European cinemas, seeing its run time extended from 73 minutes to 90.

Spielberg was 24 when he made the film and its pumped full of the energy and style that have come define his ability as a filmmaker. For those familiar with Jaws (so pretty much everyone), Duel shares many similarities. It throws an everyman into an extraordinary situation, where man is stripped of his civilized sensibilities and forced to contend with an arguably supernatural force. In this earlier film the giant man eating shark is substituted for a gas guzzling, smoke spewing, 40 tonne truck.

Based on a Richard Matheson’s short story written for Playboy, Duel is a masterpiece of suspense and paranoia. David Mann, the protagonist played by Dennis Weaver, is drawn into a high stakes game of cat and mouse on the highways and byways of back country California. Spielberg superbly juxtaposes the claustrophobia of Weaver’s fuel efficient Valiant and duel carriage ways with the mythologised freedom of the open road. Never before has anyone felt so imprisoned on the never ending highways of America.

On the surface the film is a taut, thrilling car chase movie beautifully shot and superbly edited. However, beneath the hood lies a purring engine with a lot more power (forgive the obvious metaphor), as Spielberg addresses the primal element of man (or “Mann”) vs. machine, the paranoia of middle class America and most poignantly the masculine identity. Released in 1984, Razorback falls into the recently dubbed category of Ozploitation, a term initially coined by grindhouse king Quentin Tarantino as Aussieploitation. Set in the flat, sun baked, cracked earth, Australian Outback, a small town community is terrorized by a man eating boar or Razorback.

Directed by Russell Mulcahy, who made his name directing music videos for The Buggles (Video Killed the Radio Star) Duran Duran (Hungry like the Wolf) and Bonnie Tyler (Total Eclipse of the Heart); Razorback is a sumptuous feast of visual mastery.

When American animal right activist, Beth Winters (Judy Morris), disappears whilst covering a story on the slaughter of kangaroos to supply a small town meat plant that produces pet food, her domesticated husband, Carl Winters, (Gregory Harrison) travels to Australia to investigate. There he meets and eventually teams up with salt of the earth Jake (Bill Kerr) who, having had his own grandson killed by the beastly boar, informs Carl of the presence of a demonic man-eating Razorback.

Razorback, pitched as “Jaws on Trotters,” is more than horror creature feature. Mulcahy makes terrifyingly excellent use of the Outback, transforming it into a beautifully, grotesque gothic landscape. Low lying mists take on a nature of their own, moonlight cuts through the darkness, skies turn heavy blood red and in one particular instance the desert takes on an almost dali-esque aesthetic.

Razorback pairs it isolated, outback horror with the evil, small town characters one so readily expects in these environments. Maniacal men, void of morality and humanism, as equally adept at terrorizing people as the monster central to the film, raising the question which is worse, beast or man?

There is, again, questioning of the masculine identity, and one could argue a slight undercurrent of latent homosexuality that fit into Razorbacks commentary on Australian societal constructs and attitudes. 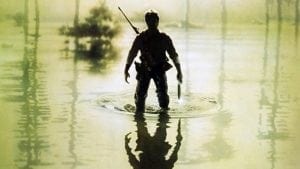 No not the drink, more Deliverance minus the Oscar nominations and immediate critical acclaim, which is a shame because Walter Hill’s, director, film, is a chilling nugget of cinema gold. Set in 1973, a group of Louisiana National Guardsmen embark on a two day training exercise deep in the Louisiana bayous, only to have their leader killed by an angry group of Cajuns, after the Guards have taken, without permission, the Cajun men’s canoes.

What ensues is part Vietnam allegory, part genre bending war/slasher movie. Although Hill has often made efforts to stay away from drawing comparisons between his film and the Vietnam War, Southern Comfort has to be considered, at least to an extent, within this context. The soldiers are placed in an unforgiving, foreign environment against an increasingly hostile group of natives, versed well in the terrain and the art of guerrilla warfare. Not to mention, the Guardsmen are armed with blanks, which echoes the blasts of American military impotence that rang so loudly in so many Vietnam War flicks.

However, the film also works as a scary group-character study. With the death of their leader the men, are faced with having to come together, organize and outwit their enemy, a feat which proves difficult and has rather bloody consequences. Hill deviates from the classic “brothers in arms” tropes and instead brings together a group of men of different class, race and with conflicting personalities and lets them unravel under the pressure.

Filmed in the winter over a period of 9 weeks, with many scenes purposely shot under tents and tarps, Hill transforms the Louisiana bayous into a dark, gloomy and frightening environment. The lighting is always low and the picture grey and the bayou becomes an environment equally as hostile as the Cajuns hunting them.

This is a moody survival drama with a strong anti-authoritarian message and, whether Hill likes it or not, a little critique on American military involvement in Vietnam.

Cornel Wilde, who directed, produced and starred in The Naked Prey, drew inspiration from both the real life account of John Colter, a tracker who was captured by and later outran (to safety) a group Native Americans whilst on an expedition with Lewis and Clarke and The Most Dangerous Game.

After his elephant hunting safari Client fails to pay tribute to an African Warrior, Safari Guide’s (Wilde) expedition is attacked, and he along with a few others captured. After a quick succession of brutally, creative executions of the remaining members of his crew, Wilde is stripped naked and given a couple minutes head start, before being pursued by a group of the tribes Warriors. And so begins a fight for survival as Wilde struggles against the harsh environs of the African outback having to contend with the heat, dry savannah, and wildlife as well as the spears, arrows and knives of his pursuers.

In a contemporary context Wilde’s film may come across to viewers as racially misguided and perhaps as carrying with it a whiff of white condescension. After all, a white man, stripped quite literally down to nothing manages time and again to outwit and outfight a group of men who without a shred of doubt possess a far superior knowledge of their surroundings and the skillsets to survive within them.

This being said, the film is not without merit. The cinematography, genuine wildlife footage, authentic tribal music soundtrack and sparse dialogue provide The Naked Prey with a documentary style realism that heightens the underlying tension and provides a unique and innovative take on the survival adventure genre.

Ultimately the film has a very humanistic message and is a mediation on the nature of mankind and its need to come together in understanding or risk being reduced to the brutal cruelty of the beast. 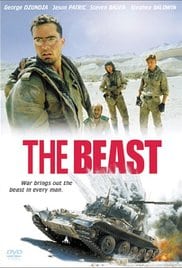 Last, but not least, comes a film from director Kevin Reynolds, who some of you may remember from Kevin Costner vehicles Robin Hood: Prince of Thieves and Waterworld. Set in 1981, the film follows a Soviet tank crew in Russian occupied Afghanistan. After an unsolicited attack on an Afghan village the crew are set upon by a battle harden group of Muhajideen, become separated from their battalion and lost behind enemy lines.

As the action unfolds, the crew find themselves making a mad dash for Russia across a sandy, endless and unforgiving Afghan desert with both temperatures and temperaments rising. A wary crew member, Konstantin (Jason Patric), finds himself questioning the brutality of tank commander and true-red Russian Daskal (George Dzundza) and is forced from the tank, tied to a rock and left for dead only to be saved by and eventually join forces with the Muhajideens out to enact revenge.

Written by William Mastrosimone and based on his stage play Nanawatai, The Beast is both an action/war survival thriller and a mediation on the morality of conflict. Its taut screenplay leaves no room for the unnecessary and the film is dripping in realism.

In an environment that has no discerning features, Reynold’s is successfully able to heighten the moral ambiguity of Russia’s Vietnam. He juxtaposes the claustrophobic interiors of the tanks, where anxiety, paranoia and fear reign supreme with the barren, sea of sand that is the Afghan desert. The result is a quality picture that muddies the line between good and evil, duty and what is right.

More like this? Read The Growth of Migration Cinemahttp://www.thelondoneconomic.com/film/immigrants-in-film/20/12/