La La Land doesn’t deserve the awards, but it does deserve our applause Of his work, Busby Berkeley once said that he just “wanted to make people happy, if only for an hour”. The early 1930s was a time of great societal darkness; the world consumed by financial uncertainty & political discontent. Audiences were hungry […] 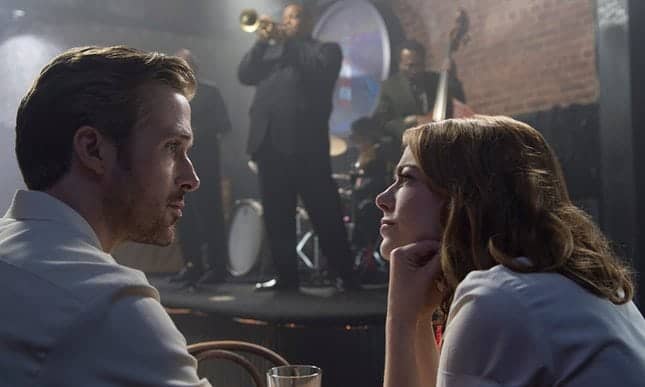 La La Land doesn’t deserve the awards, but it does deserve our applause

Of his work, Busby Berkeley once said that he just “wanted to make people happy, if only for an hour”. The early 1930s was a time of great societal darkness; the world consumed by financial uncertainty & political discontent. Audiences were hungry for entertainment – they needed an escape – and Berkeley’s elaborately choreographed & unapologetically grand dance numbers, which defined such pre-Code musical classics as Dames, Footlight Parade and 42nd Street, provided the perfect sustenance.

When I first saw Damien Chazelle’s La La Land back in early October, the gaiety I wallowed in as I glided out of the cinema was every bit as nourishing. Summertime had been something of a damp squib – one can’t help but shudder whenever I think back to the ordeal of sitting in my local multiplex watching David Ayer’s Suicide Squad, and seeing a group of obviously underage yutes be marched out of the screening by an impatient usher; how envious I was. And what’s worse, the sour taste of Brexit had now been eclipsed by the looming shadow of the forthcoming Presidential election. I felt starved of happiness, and La La Land effortlessly filled that void. It was a film for lovers, sweethearts & sentimentalists, and I fell for it at first sight.

Initially, so too did audiences & critics. Everybody, myself included, seemed to be clamouring over themselves to shower the film with affection; the rhythm; the romance; the saturated supercolour; the show-stopping soundtrack. We couldn’t get enough of it: I’ve seen films generate buzz before, but the hype here was so overwhelming it bordered on hysteria… Perhaps it was inevitable that such a fever pitch would mutate into something more ferocious.

By the time the film was finally released in mid-January, it was as easy to find a review singing La La Land’s praises as it was an article scrutinising its apparent flaws. It emerged that not everyone found the film to be as captivating as I and so many others had; some decried Chazelle’s focus on a white pianist driven by his love of a musical form originally created by African Americans as being racially insensitive, while others dismissed Emma Stone’s Mia as being less a character and more a blank canvas with no depth or coherence. And if that wasn’t enough, a number of commentators whom I wholeheartedly respect even went so far as to attack the music; not only did they seem to be struggling with the dance routines, but both Stone & her co-star, Ryan Gosling, appeared unable to hold the high notes whilst singing.

Now, I’m fully willing to accept that everyone is entitled to their own opinion, and that it was crass to expect everybody I knew to be as charmed by La La Land as I was, but having watched the film 3 times now, I’m still struggling to understand the impetus that has stoked these flames of hostility. In my eyes, Stone & Gosling’s harmonic imperfections not only grounds the story, but humanises Seb & Mia as they strive to turn their dreams into destiny; to dismiss Mia as a faceless Manic Pixie Dream Girl would be to reject a finely-tuned performance from Stone that delicately balances confidence with vulnerability; scathing accusations that the film is nothing more than a white-American power fantasy, meanwhile, strikes one as a fundamental misreading of an unapologetically theatrical fiction, which champions diversity while ostensibly being geared towards a central couple who are challenged by their professional & personal desires.

The growing backlash against La La Land is practically guaranteed to reach an ear-shattering crescendo tonight as Hollywood comes together inside the Dolby Theatre for the 89th Academy Awards. Here, however, is where I share a grievance towards Chazelle’s irresistible confection. There’s no doubt in my mind that it will walk away with a number of the top prizes, but its impossible to say with any conviction that it deserves to be awarded such accolades when pitted against Barry Jenkins’ eloquently mournful Moonlight, the incisive talents of Kenneth Lonergan, director of the magnificent Manchester By The Sea, or the intensity of both Natalie Portman & Isabelle Huppert, who both deserve to be recognised for their respective performances in Jackie & Elle.

La La Land doesn’t deserve the awards, but I do believe it is a film that deserves our applause. It’s fascinating, in the weeks after I first saw the film, many reviews – including my own – compared it to Golden Age greats like Singin’ In the Rain, but it arguably shares a closer affinity to the blissfully dynamic musicals Busby Berkeley oversaw in the 1930s. Just as Gold Diggers of 1933 reflected an entertainment industry afflicted by the realities of the Great Depression, here Chazelle ruminates with confidence & honesty on an artistic landscape gripped by its own creative depression; a place where people “worship everything” and “value nothing”, as Seb observes.

It may appear on the surface to be a love letter to Tinseltown’s glitz & glamour, but the Hollywood Mia navigates is far from a vintage fantasy. It’s a cruel world, where the inhabitants are as superficial as the snow we see cascading down on partygoers who dance in the moonlight of the balmy LA winter. The act of auditioning is a punishing process, seemingly designed to humiliate those who ache to be discovered; for all the times Chazelle transports his audience to the clouds, he relishes the opportunity to bring them back down to earth with a bang.

And yet, the final note is curiously one of hope; that despite what we may cynically believe, maybe it is truly possible for Hollywood to be subversive, even when it is commemorating something it considers to be so sacred. La La Land may sing from the heart, but it’s a film that speaks from the soul.

Why Buy an Existing Business