By Linda Marric Directed by Xiaogang Feng and staring Chinese superstar Feng Xiaogang, I am Not Madam Bovary is a film like no other film you’ve seen before. This beautifully crafted and unusually shot film is everything you’d want from a social commentary film. It touches on themes ranging from female empowerment, bureaucracy and state […] 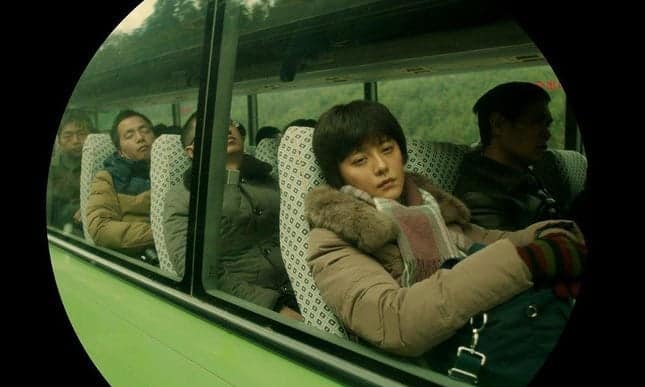 Directed by Xiaogang Feng and staring Chinese superstar Feng Xiaogang, I am Not Madam Bovary is a film like no other film you’ve seen before. This beautifully crafted and unusually shot film is everything you’d want from a social commentary film. It touches on themes ranging from female empowerment, bureaucracy and state corruption, and it does this with a huge amount of humour and clever subtext. Shot partly in a circular frame, the film isn’t just technically innovative, but is also packed to full of symbolisms and allegory.

Adapted from Liu Zhenyun’s novel I Am Not Pan Jinlian (a nod to Flaubert’s Madam Bovary), the film isn’t so much a straight adaptation of the Flaubert classic, but a rather more touching local story about women and their social standing in modern Chinese society. When Li Xuelian (Feng Xiaogang) and her husband Qin Yuhe (Zonghan Li) stage a fake divorce to get a second apartment which is reserved to single people by the state, things seem to go as planned until 6 months later when Qin Yuhe remarries behind his Li Xuelian’s back and refuses to talk to her about their original plan. Feeling dejected by what has happened, Li Xuelian decides to go to court and have her divorced annulled. When her case is thrown out, she spends the rest of her life suing everyone she can in order to have them to admit that her divorce was indeed a fake one. This greatly angers the powers thatch take it upon themselves to follow her everywhere she goes to stop her from starting more trouble.

Shot partly in a circular aspect ratio, which mimics the literati painting of the Song SDynasty, I am Madam Bovary offers so much more than its audiences would bargain for. It is packed full of hilarious and at times very touching exchanges, the film manages to transcend all cultures by offering a universal story, but also by addressing some of the local problems faced by a growing Chinese population. With extensive footage of political business being conducted mostly by men, Xiaogang Feng touches upon women’s standing and their rights .

On the whole, I am Not Madam Bovary, may not be for everyone and at over 2 hours long may seem a little too arduous for some, but its beauty is clear to see and admire. Feng Xiaogang delivers a fantastically touching and nuanced performance and does the rest of the cast. A truly magnificent pice of filmmaking which will reward those willing to stick with it till the very end.

I Am Not Madame Bovary is in cinemas from Friday 26th May.