By Jim Mackney Hotel Salvation (Mukti Bhawan) is an allegorical film that deals with life, death, shame, and friendship. It is the first film by director, Shubhashish Bhutiani and despite the film’s small budget the piece uses this to its advantage by creating a film with a slow ambient rhythm, allowing the films bigger questions […] 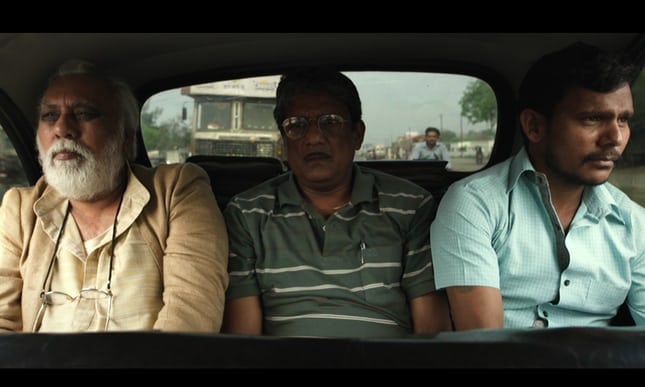 Hotel Salvation (Mukti Bhawan) is an allegorical film that deals with life, death, shame, and friendship. It is the first film by director, Shubhashish Bhutiani and despite the film’s small budget the piece uses this to its advantage by creating a film with a slow ambient rhythm, allowing the films bigger questions to be explored at their own pace.

The film follows septuagenarian Daya (Lalit Behl) and his family, creating a sense of intimacy that is far removed from what is typically expected of Indian cinema.

Daya awakes from a nightmare where he announces to his son Rajiv (Adil Hussain): “I think I am ready to die now” and outline plans to go to Varnasi, on the banks of the sacred River Ganges, to see out his final days.

Due to the unexpectedness of the trip, Rajiv has to ask his boss for time off work at short notice. This element of the film shows the traditional part of Indian life and the modern clashing. Rajiv’s boss is sceptical if the trip needs to be made at all: “You can attain salvation anywhere, don’t forget your targets!” This theme hums along in the background throughout the film with Rajiv evidently torn between modernity and tradition at certain points.

The film is essentially set up as an odd couple comedy with Rajiv playing the straight laced, insurance salesman son with Daya playing the comedic role of the pair despite his trip’s mission. The film uses its exotic location to great effect with the sense of scale of the sacred River Ganges often shown through slow panning wide and establishing shots, creating an illusion of them being eternal, a nod to the film’s main theme.

The film will bring to mind the retirement retreat of The Best Exotic Marigold Hotel and its sequel; the film however is much more rooted in Indian culture and Hindu customs. One early scene, Daya donates a cow to his temple and he later takes a ritual bath in the River Ganges. Rajiv is main the viewpoint for the film and he initially seems to be following his Dad out of a sense of duty rather than love. Adil Hussain delivers wry portrayal and you get the sense that Rajiv feels his father is attempting to leave the earth far too early.

Although all of the acting in the film is low-key, this roots the film in its realism and allows the films universal themes to shine through. The film is moving, one particular moment where Rajiv walks down to the river’s edge past hundreds of stacked logs ready for funeral pyres, brings home the enormous weight that the film is carrying. A moving debut work from a first time director.

Hotel Salvation is in cinemas from Friday 25th August.