By Linda Marric @linda_marric In Graduation (Bacalauriat), Romanian director Cristian Mungiu is back with a powerfully complex drama about compromise, parental responsibility and the lingering remnants of the old Ceausescu regime. Mungiu, who won the Palme D’Or at Cannes in 2007 for the critically acclaimed 4 Months, 3 Weeks and 2 Days (2007), deals with […] 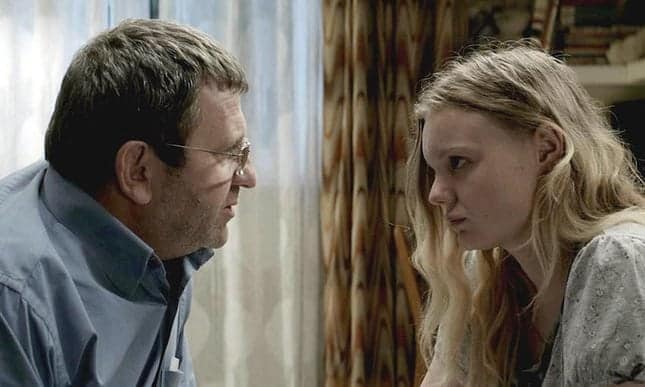 In Graduation (Bacalauriat), Romanian director Cristian Mungiu is back with a powerfully complex drama about compromise, parental responsibility and the lingering remnants of the old Ceausescu regime. Mungiu, who won the Palme D’Or at Cannes in 2007 for the critically acclaimed 4 Months, 3 Weeks and 2 Days (2007), deals with themes of modernity and corruption in a country that has yet to learn to be part of a modern European society, resorting instead to old habits from decades of dictatorship and poverty.

Romeo Aldea (Adrian Titieni) is a well meaning and talented physician living in a small rural town in Transylvania who has until now raised his daughter Eliza with the idea that she will one day leave her hometown to study in the UK. On the eve of her final exams, Eliza ((Maria Drăguş) is assaulted in an attack which could jeopardise her chances of keeping her scholarship. Faced with the prospect of losing everything he and his daughter worked so hard for, Romeo must do everything in his power to ensure that she can attend and pass the exam, even of he has to resort to bargaining with a corrupt education system.

Unbeknown to her own father, Eliza has other ideas in mind. In love with an unsuitable boyfriend, a motorbike instructor by day and a DJ by night, she sees her attack as an opportunity to finally stand up to her father about her own destiny. Although not explicitly rebellious, Eliza feels suffocated by Romeo’s expectations and thinks that he is vicariously living through her. Living in a society which seldom regards women as anything else but daughters, mothers and lovers, Eliza must decide what’s best for her. Beside Eliza, the other women in the film are presented through the eyes of Romeo’s depressed wife, his ailing mother and the lover who wants more from him than he is willing to give.

Although dealing a whole host of universal themes, it is perhaps important, but not vital, to be familiar with Romania’s most recent history to fully appreciate Graduation. The country has had difficulty moving on from the mentality of oppression, bureaucracy and patriarchy as a result of decades of dictatorship. Mungiu approaches these themes in a less subtle way than, say the Dardenne brothers, but his films are no less hard hitting. His ability to offer an absorbing narrative doesn’t take anything away from the social realist aesthetics of his films.

Graduation is a beautifully crafted and intelligent social commentary piece which will no doubt resonate with most. Mungiu’s ability to convey realistic stories is commendable and should at the very least earn him more critical acclaim if not larger audiences.

Graduation is on general release from Friday April 1st.