Perhaps lacking the same bite as Jordan Peele’s Get Out, Wes Craven’s 1991 film, The People Under the Stairs, is still a sharp commentary on American socio-economic disparity.  Disguised behind a veil of horror and comedy, Craven crafts a deeply satirical view of post-Reagan America that finds renewed potency in the age of Donald Trump. […] 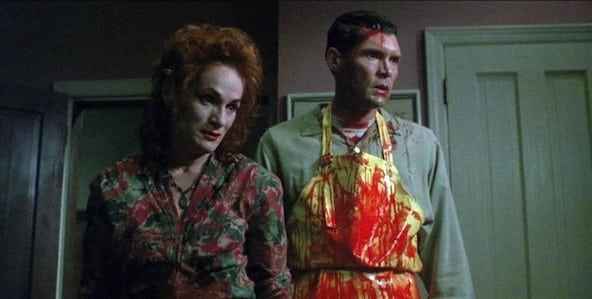 Perhaps lacking the same bite as Jordan Peele’s Get Out, Wes Craven’s 1991 film, The People Under the Stairs, is still a sharp commentary on American socio-economic disparity.  Disguised behind a veil of horror and comedy, Craven crafts a deeply satirical view of post-Reagan America that finds renewed potency in the age of Donald Trump.

Fool (Brandon Quintin Adams), a young African-American boy, lives in a run-down flat with his mother and sister in a rough neighbourhood.  Junkies crowd the hallways of their tenement building, wrestling over scraps and drinking booze bought from the local liquor store.  The family is three months behind on their extortionate rent, and now face additional penalty fees as a result.  To make matters worse, Fool’s mother is ill with a curable disease the family can’t afford the medical costs to treat.

As it turns out, Fool’s landlords are a very wealthy and very nasty couple, who refer to each other as Mommy (Wendy Robie) and Daddy (Everett McGill), and live in a former funeral home turned gothic mc-mansion.  They own dozens of apartment buildings across the city, where they are intentionally rising rent prices to force out poor families so they can build condos that will house “clean people.”

When Leroy (Ving Rhames), a well to do criminal, comes forward with a plan to break into the Landlord’s home to knick some valuable gold coins that are rumoured to be in the house, Fool sees an opportunity to save his mum and wants in.  Once they’ve cracked the locks and got through the front door though, they quickly discover that they have bitten off more than they can chew and that the house is a nightmare of depravity with a dungeon full of cannibal prisoners, something living between the walls, a vicious dog, and a couple who’ll stop at nothing to end their lives.

This is a hoot of a film, a sort of sick-reimagining of Home Alone played in reverse, with a satisfying amount of gore.  Craven pumps the film with just the right amount of madcap outlandishness that gives the film a real spirit and allows scenes, like Daddy running around the hallways of his home in a full gimp suit armed with a pump action shotgun and blasting holes into the walls, to never feel like they’re getting out of hand; a difficult feat.

The film is shot with tremendous verve, allowing the house to become a character in itself.  It’s a labyrinth of rooms and hallways that give way to crawl spaces and ventilation ducts riddled with booby traps and dead-ends, which the characters have to contend with as much as they do the psychotic landlords.

But, more interesting is what lies beneath the surface of The People Under the Stairs, as Mommy and Daddy’s home becomes a microcosm of America that captures the spirit of post-Reagan American society, and the division between the upper-middle and working classes.

The landlords sit on a mountain of wealth, they own apartment buildings across the city, control rent prices and, in a wonderful detail, it transpires that they also own the local liquor store in Fool’s ghetto.  They create the problems and do nothing to invite change.  All of which points to a criticism of a middle class, yuppie sense of entitlement and self-interest and an total disregard for community and collective responsibility.

Fools’ character, represented by a young African American actor, speaks to the experience of those living and trying to make it in a broken system.  His turn to crime is the result of circumstance and environment.  And by pitting the boy against the Landlords Craven highlights the greater evil.

This is fantastic film and perfect viewing for a Friday night.