Michael McNulty Let’s be honest, how many times have you decided against a night in, instead opting for a night of heavy drinking and ear deafeningly loud chart topping tracks just to avoid flipping through endless TV channels, scrolling past countless Netflix programmes and trawling an infinite number of IMDB webpages. Finding the Friday night […] 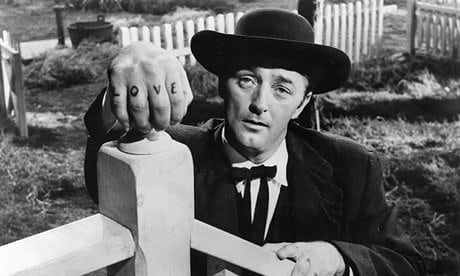 Let’s be honest, how many times have you decided against a night in, instead opting for a night of heavy drinking and ear deafeningly loud chart topping tracks just to avoid flipping through endless TV channels, scrolling past countless Netflix programmes and trawling an infinite number of IMDB webpages. Finding the Friday night film sometimes seems like too daunting a task, so you make the easy choice and surrender yourself to a boozey night out, when really your heart pines for the comfort of your front room, a sofa, blanket and takeaway. Well surrender no more, here is this week’s perfect Friday Night Film.

The Night of the Hunter, the only film English born actor Charles Laughton ever directed, is a southern gothic, expressionist, horror classic and a film to behold. Initially dismissed, the film was a critical and commercial flop with audiences unable to connect with its stylized visual presentation, twisted narrative and characters. It has, in recent decades, come to be recognized as a frighteningly beautiful piece of cinema with the qualities that held it back giving it the stature it so rightly deserves.

Based on the novel of the same name by Davis Grubb and set in depression era America, Robert Mitchum plays Harry Powel, a demented grifter and God fearing preacher, based on real life serial killer Harry Powers.

Powell learns that a fellow inmate, condemned to death for murdering two people whilst robbing a bank, stashed $10,000 worth of loot at his family home. Once free, Powell swoops in charms the now widowed wife Willa (Shelley Winters) and tries to extract the location of the hidden money from her son and daughter, who know where the money is, but do not trust the preacher.

The film is stunning in its presentation; the visuals drip in expressionist lighting and the sets posses a surreal quality. Stanely Cortez’s cinematography is hauntingly beautiful, capturing innocence, fear and horror. Most memorable, the underwater shot of Willa, throat cut, sitting in the front seat of her car, hair drifting alongside long tendrils of seaweed. It feels like a noir thriller as imagined in a nightmare, it’s cynical and complete with death, greed, corruption of the soul and biblical references.

Also notable is the films treatment of, what would have been at the time, risqué sexual themes. Powell is a misogynist, his knife a symbol of suppressed sexual urges, occasionally shooting out of his jacket pocket. Willa’s marriage to Powell is a desperate attempt to cleanse herself of her desires. The film’s treatment of sex raises questions as to the motives of Mitchum’s character, religiosity, Christian guilt and sin.

The Night of the Hunter is a chilling thriller that will haunt you long after the closing credits.