Andrew Niccol’s Gattaca, set in a dystopic near future, is a sleek sci-fi thriller that imagines a world where eugenics dictate people’s standing in society. It was Niccol’s directorial debut, released before The Truman Show – the script for which Niccol’s would earn an academy nomination – and made on a relatively tight budget of $36 […] 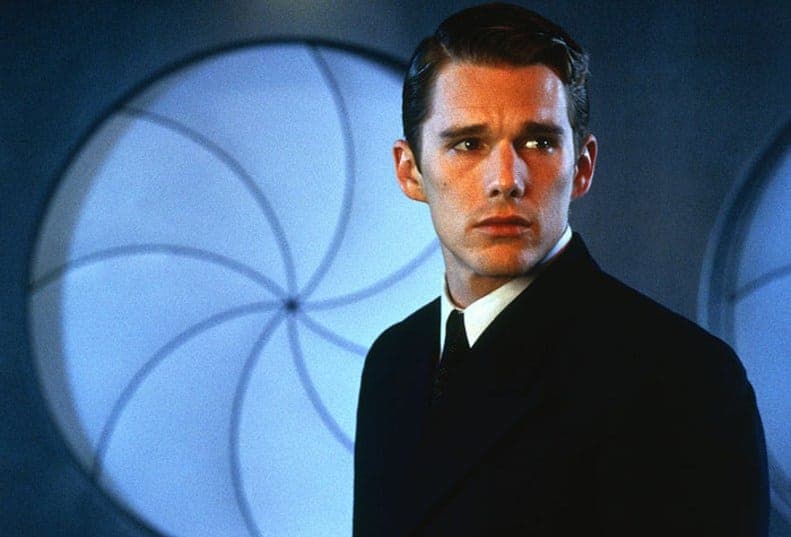 Andrew Niccol’s Gattaca, set in a dystopic near future, is a sleek sci-fi thriller that imagines a world where eugenics dictate people’s standing in society.

It was Niccol’s directorial debut, released before The Truman Show – the script for which Niccol’s would earn an academy nomination – and made on a relatively tight budget of $36 million.  It was a box office flop, only recouping roughly $12 million and was poorly received by critics.  However, over the years Niccol’s film continues to find a steadily increasing fan base, cementing its place in sci-fi film history.  In 2011, Gattaca took the top stop on NASA’s list of most plausible science fiction films (2012 taking top prize as their least plausible pick).

Set in a futuristic dystopia with a distinct 1950s retro sci-fi look, the film tells the story of the young, fiercely ambitious Vincent (Ethan Hawke).  Born into a world in which scientific advancement has seen the rise of genetically modified super babies, Vincent is a natural born, conceived out of love and scuppered by the now widely regarded handicap of regular genes.  On the day of his birth, the doctors list off all of the genetic defects he will suffer from.  Some minor, some major, including a dickie heart that won’t see him live past 30.

As a result, a new social order has taken root, one where the genetically engineered exist in the highest strata of society with unrestricted access to the best that life has to offer.  Those born naturally are reduced to the chastising label of “In-Valids” and a life of menial labour.  Vincent though, falling into the latter category, has big dreams of one day working for the Gattaca Corporation, a highly exclusive space centre reserved for the genetic elite, and going into space.

Determined to fulfil his dream, Vincent teams up with Jerome Morrow (Jude Law), former Olympic swimmer and cream of the crop, turned bitter cynic after being paralyzed in a car accident and assumes his identity. This is no easy feat as in this world there are checks abound, and the smallest genetic trace could have very revealing consequences.

But, Vincent has them fooled, successfully having passed himself off as Jerome.  It is not until a week before the aspiring spaceman is to shoot into the big black on a mission to Titan, Saturn’s 14th moon, that things go terribly awry.  The mission chief is brutally murdered, and an investigation is set in motion that runs the risk of unearthing the truth about Vincent.

Gattaca is a taut sci-fi thriller with a touch of noir shaded in.  Uma Thurman, playing Irene, is introduced as a love interest and a counterweight to Vincent’s unstoppable determination, faith and drive.  Both suffer from heart defects, but whilst Irene has accepted hers as a limitation that prevents her from being a part of a space mission, Vincent has used his to push doggedly forward to achieve his dreams. 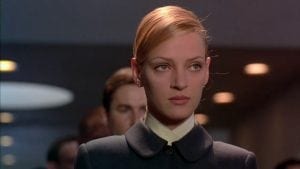 From the use of refurbished Citroen DS Cabriolets to the Marin Country Civic Centre as the Gattaca Corporation HQ, Niccol’s and production designer, Jan Roelfs, create a coolly, sleek future world built on the familiarity of a 50s’ aesthetic that grounds the film in a tangible sense of reality.

Niccol’s makes excellent use of colour, bathing the whole film in soft, golden sepias and cool greys, blues and greens.  These present the world in a clinical, impersonal way that helps to heighten the societal divide and sense of limitation as well as reinforce a very simple depiction of a science fiction world that is more akin to Blade Runner, refreshingly light on high-tech gadgetry and hyper-drive space travel.

The performances are all strong, with Alan Arkin appearing as one of the detectives leading the case.  But, it is Jude Law, his first outing in an American film and Ethan Hawke who stand out.  Law plays Jerome confidently, finding the balance between frustration, resentment and deep unhappiness masked by a wry arrogance perfectly.  Hawke’s unerring everyman walking the tightrope of two identities and constantly struggling internally with his own sense of being an imposter is nuanced and relatable.

Great film for a Friday night.

Out Now In Cinemas