★★★★★ There are some places God is not wanted. That’s how it feels in Hlynur Pálmason’s astonishing late 19th century odyssey, in which a naïve Danish priest and amateur photography enthusiast sets off for Iceland, at the time a dependency of Denmark, to build a church in the relatively unknown south eastern part of the […] 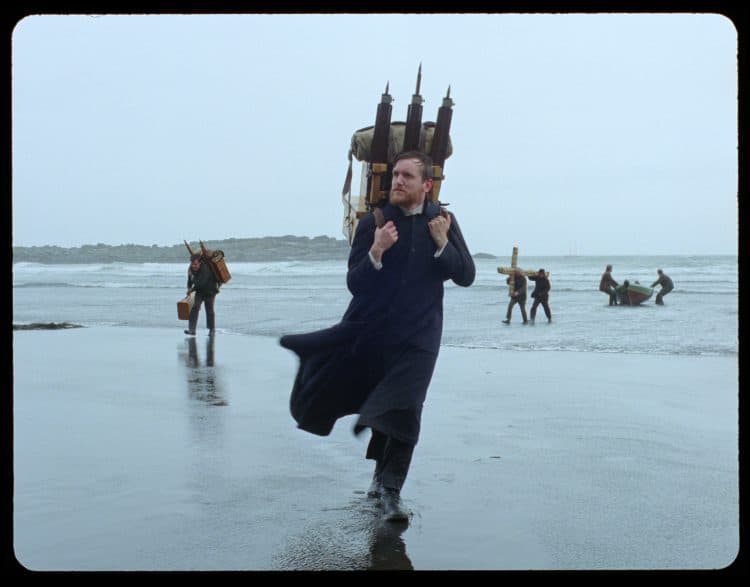 There are some places God is not wanted. That’s how it feels in Hlynur Pálmason’s astonishing late 19th century odyssey, in which a naïve Danish priest and amateur photography enthusiast sets off for Iceland, at the time a dependency of Denmark, to build a church in the relatively unknown south eastern part of the land.

Lucas (Elliott Crosset Hove), the soldier for Christ, is a bit of an odd duck. Instead of travelling directly by boat to the south eastern coast, he insists on a backbreaking and dangerous journey across mountains and glaciers, mimicking the savage pilgrimages undertaken by earlier spreaders of the gospel in heathen lands, photographing the people he meets along the way (which isn’t many, given the sparse population). The first half of the film is a Werner Herzog style tale of endurance across inhospitable terrain, but it feels entirely performative on Lucas’ part, and those guiding him seem to find the whole thing a bit a mystifying and arrogant.

Filmed in the Academy ratio, on 35mm, Maria von Hausswolff’s deep focus Romanticism-tinged cinematography does more than photograph the landscapes of Iceland in the detached anthropological way of Lucas, it forcefully transmits to us the power of the unknowable, the staggering majesty of the primordial world, the sheer brutality of rock formations, the ice, the faraway looming cloud-smothered volcanos spewing ash into the open air. It is at once celebratory of a unique island, awe-inspiring, but equally foreboding. God feels irrelevant because we are beyond God, way past prayers and salvation. It is clear enough, too, God symbolises Denmark and Lucas fails to understand the Icelanders are yearning for something entirely different than old time religion: their independence.

The second half of the picture changes subtle gear, once Lucas arrives at his destination. Everything about this film trades in subtle richness. It unfolds as almost like a John Ford picture about a burgeoning community forged in the wilderness. When a farmer’s daughter catches the eye of Lucas, they begin a very chaste and romantic entanglement, the farmer uneasy about the situation. Then it turns once more, becoming akin to a naturalist tragedy, with an ending echoing the delicious blasphemy of Luis Buñuel. As the church is completed, Lucas’ derangement and humiliation in the eyes of the community becomes more pronounced. The holy man has transformed into a devil.

Hlynur Pálmason’s feature film, as strange as it sounds, is an ambitious and rewarding synthesis of the western, the rural melodrama, a colonial critique, an adventure picture, an anti-religious tale, a story of growing national identity and a study in how landscape affects human psychology. There is clearly added historic weight and significance for Icelandic and Danish audiences, too. But that it works a treat beyond such borders is testament to what’s on offer. Godland is a cinematic work of art if ever there was one.