Ever since Juno blew me away at the cinema I’ve been fascinated by Diablo Cody’s work as a screenwriter. She’s always worked best delving into the dramas playing out in suburban homes across America, transforming what may be mundane into the witty and heartfelt. While Juno dealt with the impact of pregnancy, Tully focuses on […] 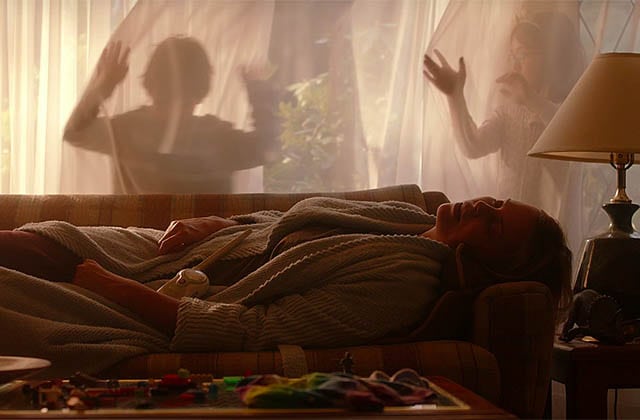 Ever since Juno blew me away at the cinema I’ve been fascinated by Diablo Cody’s work as a screenwriter. She’s always worked best delving into the dramas playing out in suburban homes across America, transforming what may be mundane into the witty and heartfelt.

While Juno dealt with the impact of pregnancy, Tully focuses on the immediacy of raising an infant. Marlo (Charlize Theron) already has two kids with her husband Drew (Ron Livingston), and her hands full with ‘quirky’ son Jonah (Asher Miles Fallica). Her more affluent brother Craig (Mark Duplass) offers to hire a night nanny to help look after her newborn third child Mia, which is where the free spirit Tully (Mackenzie Davis) comes into her life.

What could become a The Hand That Rocks The Cradle actually turns into a female Fight Club, Marlo entranced by this carefree waif that she once was and aspires to be again. This role as Tully is something of a reversal from Mackenzie Davis’ role as the skittish and repressed Yorkie of the San Junipero episode of Black Mirror, yet she is able to capture the carefree youth that threatens and inspires Marlo with aplomb.

This film combines Marlo’s understandable desires to escape with its own real desire to capture what it can really mean to be a mother in difficult financial circumstances. Especially in early scenes after Mia’s birth and in montages throughout, director Jason Reitman is able to capture the exhausting, grinding strain of motherhood in which women must suffer in a matter-of-fact way the world over. That what Marlo is watching on television is so far removed from her life feels like a comment on how rarely being this sort of mother is addressed in popular culture.

Theron remains a paragon of beauty in Hollywood, and in her dedication to convincingly playing an exhausted and downbeat mother in Tully she gained fifty pounds for the role. It’s not quite as extreme as her physical transformation for Monster, but it is indicative of a convincing, heartfelt performance.

Like Theron’s role in previous Cody/Reitman collaboration Young Adult here she is able to brilliantly capture the fears of ageing and the dull pains hidden beneath fanciful pursuits (in this case dreaming of mermaids and watching reality TV about gigolos). The wit and preciousness of Juno McGuff may start to grate when revisited, but Theron’s Marlo feels more grounded in the real world and able to use her zingers sparingly (‘My son is quirky? Like a pocket watch?’).

An issue comes with the relationship between her husband and brother. They look and act the same, but for reasons unclear they hate each other. Cody may have deliberately focused on fleshing out the relationship between Marlo and Tully, though this has ultimately left the male supporting underwritten. This also stretches to the relationship with Tully and her son Jonah, which can be affecting but can also take on the same familiar strains found in The Babadook and many more.

Tully is another accomplished work from Cody and Reitman, especially in the first half when raising three kids while a husband sleeps, works and games is confronted without blinking. I sincerely hope for success in this original and memorable film, and that it finds the audience that their previous work Young Adult largely failed to do.