The Young Karl Marx is directed by Haitian film-maker, Raoul Peck, whose previous work, I Am Not Your Negro – a documentary focusing on James Baldwin – earned him an Oscar nomination. His latest effort is an intense period drama of the early life and work of Karl Marx. The film does not make any concessions […] 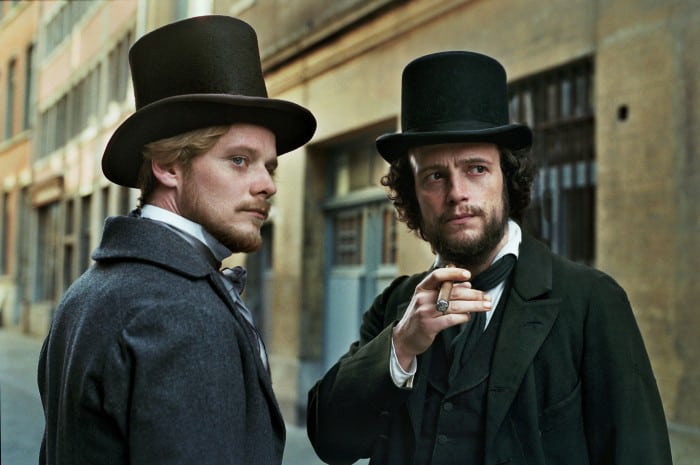 The Young Karl Marx is directed by Haitian film-maker, Raoul Peck, whose previous work, I Am Not Your Negro – a documentary focusing on James Baldwin – earned him an Oscar nomination. His latest effort is an intense period drama of the early life and work of Karl Marx. The film does not make any concessions to the audience in presenting the subject matter from an intellectual point of view rather than an emotional one. This does not mean the film is cold, on the contrary the film fizzes with a sense of life and excitement formed from the young Marx’s ideals and ideas.

Opening in Cologne in 1843, we see Marx being arrested for his work for a revolutionary newspaper although he is skeptical of the papers direction with the young Marx clearly hankering for a better platform in which to share his ideas, uttering the line “I’ve had enough of fighting with pins, I want a sledgehammer”. Most of the early staging of the film sets Marx up as an idealist, an intelligent one but seemingly slightly rudderless.

We are introduced to Marx’s ideological partner Friedrich Engels as he tours one of his father’s factories in Manchester. The film positions Marx and Engels initially as wary adversaries but this pretense is dropped swiftly as the clear high regard they hold each other shines through and the film riffs on this bromance throughout.

Marx is played by August Diehl: indignant at the poverty the working classes are subjected to, addicted to cheap cigars and always on the lookout for an intellectual battle of wits. Engels, played by Stefan Konarske, is the polar opposite to Marx in many ways; a rich kid whose father is a mill owner, dresses like a fop and to all intents and purposes reeks of the Bourgeoisie. However they align in their ideological interests, as Engels is fascinated and excited by the forthcoming victory for the working class.

For a film that is ultimately about theories, concepts and the arguments of them, the film barrels along at an enjoyable pace. Early in the film there is even an almost slapstick style chase sequence which although rooted in believability is great fun. If the film falls down it is in the representation of its female characters. Marx’s wife Jenny, played by Vicky Krieps, and Engels’ love interest, millworker Mary Burns (Hannah Steele) are rather one note and do not progress throughout the film, making their respective relationships and portrayals enjoyable but rather one note.

The film heads towards its conclusions with the men being invited to join the socialist fraternity League of the Just, to lend intellectual and systematic thoroughness to the fervent movement. Here Konarske is able take centre stage and the film’s focus shifts ever so slightly, away from the men’s ideals towards the actual realisation of their work in the Communist Manifesto.

The Young Karl Marx does a good job of showing the toll early life took on Marx with him being shown as a young idealist who morphs into a man worn out by the birth of communism and his attempts to write the Communist Manifesto. It is an excellent period drama that has a tight script, good direction and excellent central performances of the two leads. Thoroughly recommended, whether you’re a fully paid up member of Marxism or not.