Warwick Thornton’s feature debut, Samson and Delilah, a sensitive, sad tale of two Aboriginal lovers living in Alice Springs, took home the Camera d’Or at Cannes and introduced an emerging talent to the stable of promising Australian directors.  The 47-year-old cinematic jack of all trades, often serving as both Director and cinematographer on his films, working from a script […]

Warwick Thornton’s feature debut, Samson and Delilah, a sensitive, sad tale of two Aboriginal lovers living in Alice Springs, took home the Camera d’Or at Cannes and introduced an emerging talent to the stable of promising Australian directors.  The 47-year-old cinematic jack of all trades, often serving as both Director and cinematographer on his films, working from a script by Steven McGregor and David Tranter, delivers in Sweet Country a beautifully poetic, brutally raw Australian Western that explores the intersection, connection and overlap of White and Aboriginal Australia.

The Western is a transnational cinema, one that extends beyond the limitations of American film history and national mythology.  Thornton has crafted a film that is specific to Australia in its representation of the country’s (post)coloniality and the history of a marginalized and excluded indigenous people.

When Harry March (Ewen Leslie) pulls up to Fred Smith’s (Sam Neill) station and asks to borrow one of Smith’s “black stock,” March brings with him a palpable air of dread.  The winds shift and an unspoken promise that something terrible is about to happen looms heavily overhead.

March is a rum-soaked war veteran haunted by the ghosts of his military service and who has recently taken up a nearby station.  With only his dog as company, the harsh heat and unforgiving land make the upkeep of his property a difficult task and so, on the back of Smith’s goodwill he employs Sam Kelly (Hamilton Morris), an Aboriginal man, for a day’s labour, helping him to fix his cattle yard. 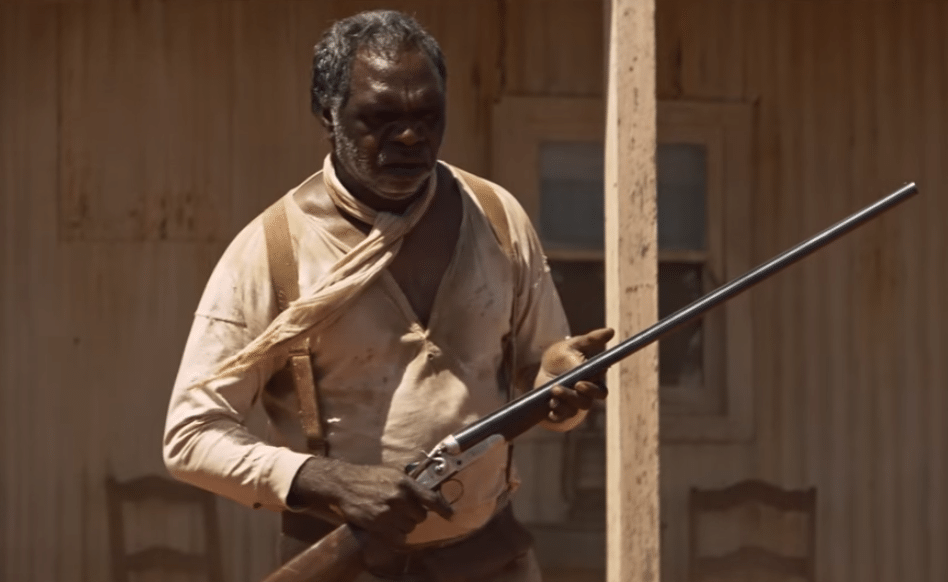 When March turns confrontational, Sam is forced to shoot him dead and the weight of the death of a “whitefella” at the hand of an Aboriginal forces Sam to go on the run with his wife.  A hunting party is thrown together, headed by the hard-bitten local Police Sergeant, Fletcher (Bryan Brown), one of his deputies, Smith, station owner, Kennedy (Thomas M. Wright) and his Aboriginal farm hand, Archie (Gibson John), serving as tracker and together they set out to run them down.

Sweet Country exists in its own time, with the narrative unfolding in a slow, deliberate, contemplative way.  Its linearity is fractured by jumps backwards and forwards, providing insights into events gone by or alluding at those to come and gives the film a rich mythical, magical quality that baths it in a spirituality that reflects the history and connection of Australia’s landscape to its people.

The raw brutality of the film’s violence strikes hot and fast, searing the skin, but it’s the lingering scars of the burns that speak loudest.  An empty bottle of whiskey sits out of place on of the red desert floor, the chains of a young Aboriginal boy, Philomac (Tremayne Doolan and Trevor Doolan), dragging through the sand and an imposing Christian cross set against the backdrop of a vast and beautiful countryside serve as nuanced visual indicators of the imported pain and suffering that accompanied Australia’s colonisation. 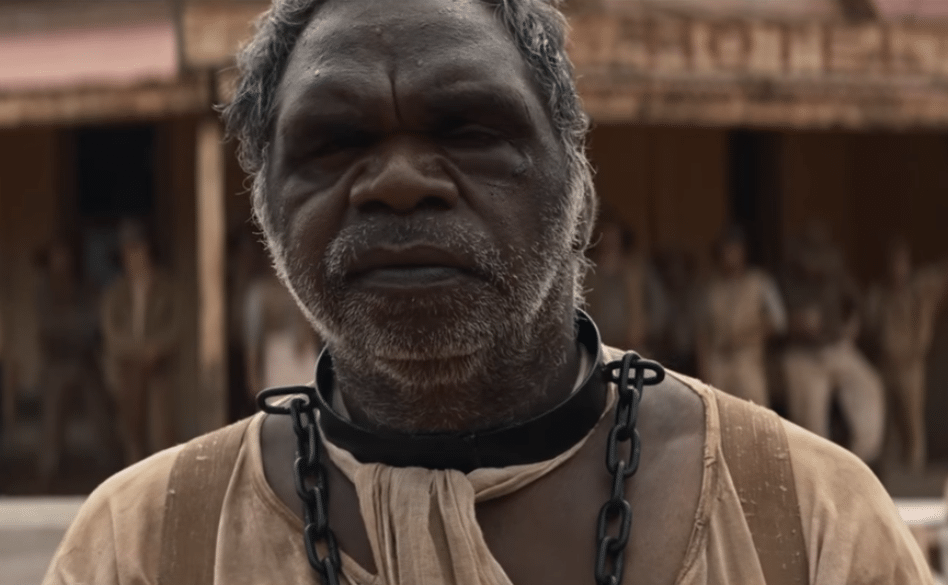 In one scene, Sergeant Fletcher, speaking words over March’s funeral (a man he has never met) says, “a man, who like myself, was a soldier, fought for King and country.”  It’s a statement that echoes the term that invoked the justification of Australia’s colonisation, Terra Nullius – or nobodies land.  But, this is somebodies land and we are quick to understand this as Sam navigates deftly through uncompromising terrain, always a half a day ahead of his pursuers who travel on horseback.

Thornton, working with co-cinematographer and son, Dylan, shoots Australia beautifully, capturing the stark, raw immensity of the landscape with biblically epic proportions.  The orange red-sands of rock formations are striking against the heavy greys of approaching storm clouds, cracked and barren white salt lakes sit untouched in the middle of deserts, the country has a life of its own.

Stripped of a soundtrack, Sweet Country finds its score instead composed of the sounds of the outback.  It adds a layer of almost tangible texture that envelops you and breaths fresh, real life into the world, heightening the power of the unfolding action and demanding you to pause, reflect and confront its emotional weight.

There is little room to misinterpret the political subtext of Thornton’s film.  Its final frames serving as a frank, cruel microcosm for the film and history of Australia itself.  Sweet Country is a tragic, beautiful powerhouse that will stay with you.