Warning: Though this review is spoiler free, the film’s set-up is referenced throughout. “Good guys, bad guys, these are all just words,” says Benicio Del Toro’s inscrutable space-hacker DJ about a third of the way through The Last Jedi; his own allegiances, tellingly, enigmatically blurred between the dark and the light. The Star Wars saga […] 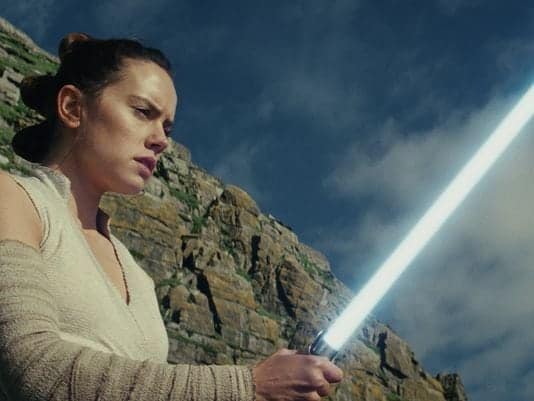 “Good guys, bad guys, these are all just words,” says Benicio Del Toro’s inscrutable space-hacker DJ about a third of the way through The Last Jedi; his own allegiances, tellingly, enigmatically blurred between the dark and the light. The Star Wars saga means so many things to so many people, but its narrative and thematic crux has ostensibly been the same since George Lucas first introduced us to this far away galaxy back in 1977 – the cyclical struggle of good vs. evil, and what it means to fight for either side.

Writer/director Rian Johnson has explored similar ideas with a weighty complexity in past projects, most notably in 2012’s Looper, but here – having taken the reins from Force Awakens director J.J. Abrams – he sets about reflecting on these refrains with not only a dexterous understanding of the Star Wars legacy, and also a refreshing resolve to forge a new path for the franchise. “This is not going to go the way you think,” declares Mark Hamill’s beloved Jedi master Luke Skywalker at one point; a warning meant for Daisy Ridley’s Rey, but best heeded by all those settling down to watch this soaring sci-fi epic.

Johnson begins exactly where Abrams left off, with Rey confronting Skywalker on the faraway island of Ahch-To, where the legendary Jedi warrior has lived for years in self-imposed exile. Rey’s hope is that Luke will be able to offer her guidance as she continues to develop her newly discovered abilities. However, having seen first hand – in the form of his former student Kylo Ren (Adam Driver) – what this raw strength can create, Skywalker fears that such control could lead to a new generation of Sith lords, leaving him convinced that it is now time for the Jedi to end.

Meanwhile, in the skies above, General Leia Organa (the late Carrie Fisher) continues to command the Resistance with the help of star pilot Poe Dameron (Oscar Isaac), former stormtrooper Finn (John Boyega), and the newly introduced Vice Admiral Holdo (Laura Dern). Forced to flee from their rebel base by the First Order, Leia and her diminished army are now traveling the galaxy pursued by Supreme Leader Snoke’s (Andy Serkis) forces; led by both Kylo Ren and General Hux (a mercifully more restrained Domhnall Gleeson), whose relationship Snoke is keen to manipulate for his own military gain. Realising that the end may be nigh, the Resistance’s only hope is that Rey can convince Skywalker to come out of hiding, and join the fight once more.

News that Disney wants Johnson to lead the way in creating a future Star Wars trilogy after Abrams brings this story to a close with Episode IX is hardly surprising given the finished product. To proffer any spoilers here, of course, would be borderline blasphemous, but it isn’t sacrilege to tell you that as the lights came up after The Last Jedi, I found myself sobbing almost uncontrollably; not through sadness, but more because I was so overwhelmed by the sheer awe of Rian Johnson’s vision.

While The Force Awakens allowed the franchise to find its feet once more by trading heavily on the nostalgia of the original trilogy, Last Jedi seeks to subvert our expectations with twists and turns that at times are so unexpected, the gasps of the audience are likely to be heard audibly ricocheting off the walls of the auditorium.

Most intriguing is Johnson’s decision to pivot the plot around a drawn-out chase sequence between Snoke’s Star Destroyer and Leia’s Resistance cruiser. Cutting between the action on board and that on Ahch-To, the director leisurely allows for both the story and characters to grow organically – a particular benefit to the progression of Rey & Ren’s respective journeys: Ridley’s performance, though a little strained in the early stages, being far more settled than it was before, while Adam Driver once more seizes on Kylo’s brattish sensibilities and internal conflicts to affirm himself as the Saga’s greatest villain to date.

For a Star Wars film, the pace is unexpectedly measured during the first and second movement, at times it’s even meandering; the storytelling on a scale so ambitious that the narrative occasionally leaves you somewhat confounded. And yet the script’s emotional range is so impressively vast, and so beautifully rendered through the characters that by the time we reach the pulse-pounding final hour, any flaws are either forgotten, or fail to register.

All of the new cast continue to impress, most notably John Boyega, whose relaxed charisma is the perfect foil to the film’s ever-deepening tonal intensity. But it’s the old guard who are once more afforded the more thoughtful notes: Carrie Fisher soulfully drawing on Leia’s unwavering strength, even when it appears that all hope is lost, as Hamill skilfully composites his weathered appearance with Luke’s broken and embittered demeanour. 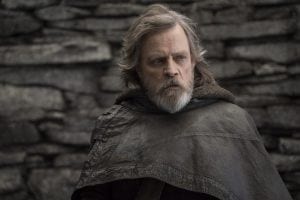 Johnson though, is arguably the real star. His stylistic repertoire perfectly balances with his use of classic visual compositions; the momentary absences of diegetic sound are a profoundly expressive addition. And his love for the world is plain to see; be it in the larger role he extends to BB-8, or the introduction of the already infamous Porgs, who manage to be both cute and comedic without ever being a grating presence.

There’s an energy to The Last Jedi that’s so breathlessly powerful it’s impossible not to be momentarily dazed when the John Williams score kicks in as the credits roll. Abrams’ film may arguably be the more assured, but this is easily the more formidable of the two. And perhaps, dare it be said, also the best Star Wars film to date. The Force was awoken before, but here, it’s unleashed.