You can almost hear the faint chorus of “America, fuck yeah!” in the background of Steven Quale’s Bosnia-set, Navy SEALs action-adventure romp. Penned (in part) by Luc Besson, Renegades is a mash-up of Team America and Three Kings without any of the cynicism or irony, and played with the same straight faced, “America the Great” […] 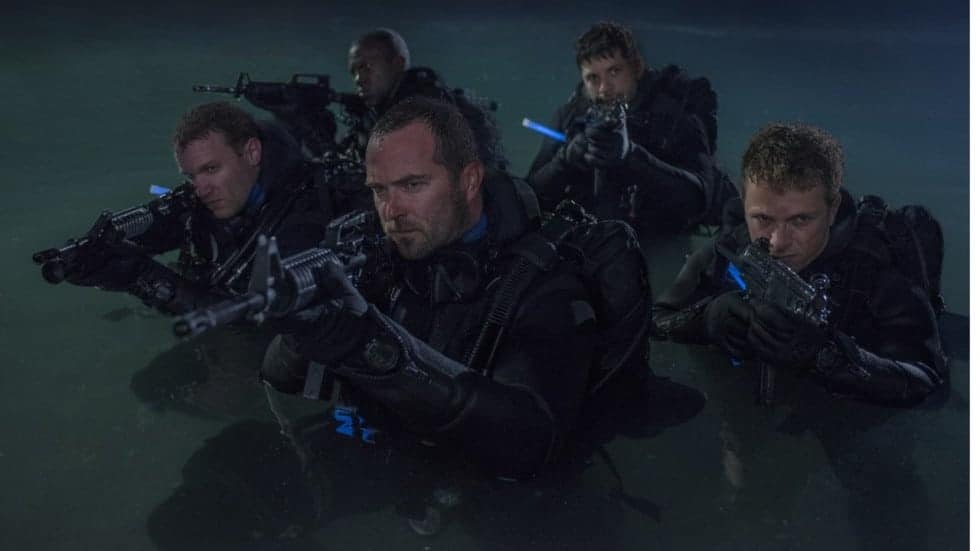 You can almost hear the faint chorus of “America, fuck yeah!” in the background of Steven Quale’s Bosnia-set, Navy SEALs action-adventure romp. Penned (in part) by Luc Besson, Renegades is a mash-up of Team America and Three Kings without any of the cynicism or irony, and played with the same straight faced, “America the Great” determination of Clint Eastwood’s American Sniper.

A hardened group of all-American frogmen in Sarajevo, during the Bosnian War, learn from a local barmaid, Lara (Sylvia Hoeks), that French gold reserves, stolen by Nazis during the Second World War, lie sunken at the bottom of a local lake. The team cut a deal, agreeing to retrieve the gold bars, valued at 300 million dollars, from the depths of their murky waters and divide the take evenly, 50-50. Lara plans to use this money to help get Bosnia on its feet and the guys to buy… jet skis, maybe. But, to complicate matters, the men have ruffled the feathers of local warlord Petrovic (Clemens Schick), who has made it his mission to destroy them.

It’s gung-ho, exposition heavy fare, complete with helicopters, tanks, explosions and agonisingly cringe-worthy dialogue, all of which may have been forgivable if the moral compass of Renegades wasn’t so completely warped. The film is tone deaf, making light of a serious conflict that involved genocide. It is insidiously manipulative, playing into both sides of the American ethos, and painting them in the poisonously bright colours of the stars and stripes. Renegades plays to the tune of:

“These good ol’ American boys have found an opportunity to help them poor folk down Bosnia way, now ain’t that good of em’ and well, why not keep a little of that gold, after all, you make your own opportunity.”

The thin veil of wholesome, American nobility is so transparent you can see the fat, sweaty body of self-interest rolling around on a bed of money and self-satisfaction behind it. The end is so grossly predictable that you need not be told to pack a sick bucket and tic-tacs to drown out the bitter taste it will leave in your mouth.