Pedro Pinho’s first feature film, The Nothing Factory, is a three hour social-realist epic that’s baggier than a pair of nineties jeans and so overly long that dullness eventually turns into despair. The film takes inspiration from the real life story of a group of factory workers who, in a unique case of experimental self-management, […] 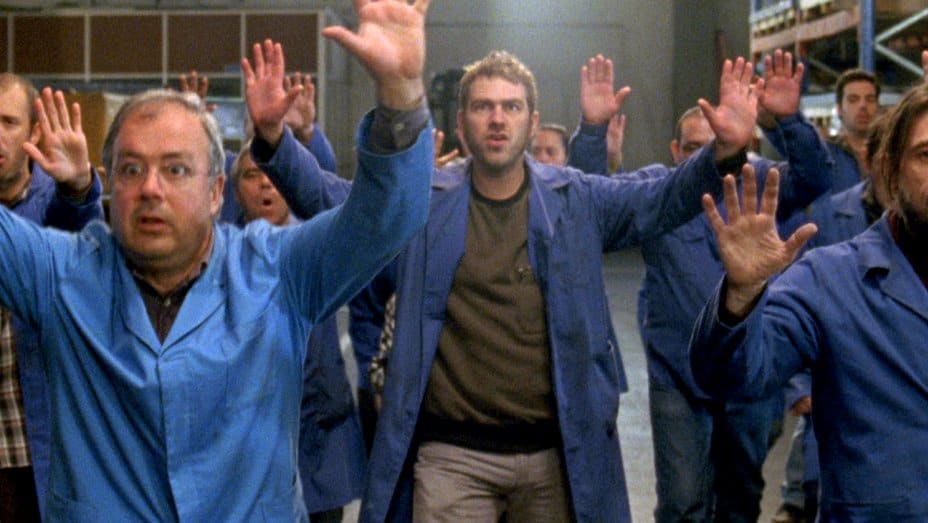 Pedro Pinho’s first feature film, The Nothing Factory, is a three hour social-realist epic that’s baggier than a pair of nineties jeans and so overly long that dullness eventually turns into despair. The film takes inspiration from the real life story of a group of factory workers who, in a unique case of experimental self-management, took charge of a lift building factory in Portugal.

When the workers of said factory discover machinery being sneaked off premises late one night, panic sets in as the crew begin to worry about downsizing and layoffs. Their fears become reality when a termination team, in the form of an administrator and HR rep, is brought in the following morning and begin giving people the chop. Slowly, as increasing numbers of the factory workers begin to accept their severance packages and leave, a small group band together and occupy the empty factory.

With Pinho coming from a background in documentary filmmaking, The Nothing Factory manages a gritty realism, helped along by its grainy presentation on 16mm film. All the performers are non-professional actors, with many being actual factory workers and the camera work is fluid, all of which adds an extra layer of authenticity and naturalism to the production. However, it is also Pinho’s previous documentary experience that is undoubtedly the source of the film’s flaws. Scenes are stretched out to excruciating lengths, and the narrative lacks focus, deviating away from story & character into subject & theorising.

The introduction of Danièle, an anti-capitalist, leftist intellectual who shadows the employees of the factory as they go about their occupancy, briefly promises a new take on an old formula. The film, after all, explores the struggle of the working classes during a time of economic recession and technological advancement; familiar fare. Scenes in which Danièle interacts with the factory workers blur the lines between fiction and documentary, forcing the film into surrealist, self-referential territory that is only heightened with an out of the blue musical number in the final act.

But it’s too little too late, and undercut by Pinho’s seeming insistence to tell the audience what he is already showing, deflating and prolonging the film. In one scene, a dense, impenetrable dinner conversation between Danièle and a group of friends drags on well past the ten minute mark to numbing effect as they intellectualise over ideas the film is already working to visualise.

Somewhere, hidden between The Nothing Factory’s 177 minute runtime, Pinho has a better film, one that wouldn’t lose you so quickly and might even leave you wanting a little more.

Sajid Javid says sale of Channel 4 will set it ‘free’