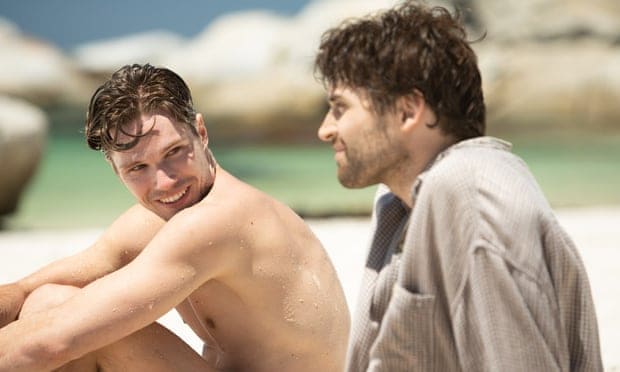 In the titling of his remarkable film Moffie, an even more derogatory Afrikaans slang for ‘faggot’, director Oliver Hermanus makes an intention of reclaiming the word as a badge of honour rather than a precursor for shame. Based on the eponymous autobiographical novel by Andre Carl van der Merwe, a young Nicholas Van De Swart (Kai Luke Brummer) comes-of age through the hardship of conscription and institutionalised homophobia.

Nick is in his late teens, fresh out of high school and is about to be drafted into the military. Like all white South African males of the time in the apartheid 80s, he is sent to the army to combat the threat of communism from neighbouring Angola. A long train journey to his assigned post, has him share a carriage with another recruit, the good-natured Michael Sachs (Matthew Vey) offering him shots of liquor to lessen their nerves . The interaction temporarily softens the blow of the daunting unknown. Their moment is interrupted by a disturbing intrusion of an innocent black man waiting by the platform becomes accosted by the feral recruits from the incoming train, an alarming signifier of what era this is.

As the train pierces the expansive barren terrains, its stark and ominous beauty highlights the pervasive eerie yet dulcet cinematography of Jamie Ramsey. Ramsey utilizes natural light to full effect, along with his stylized hazy lens accentuate the dusky colours, the perpetual movement and the unseen dangers of the ubiquitous wildlife. It’s all matched with an exceptional musical score by Braam du Toit, a strongly felt presence throughout. Whether its ramping up anxiety with a continuous hypnotic plucking of strings or a sense of relief offered by the soft choral singing of a countertenor; its compelling emotiveness merits it a place as a stand-alone character.

The cruel military training involves all manner of physical and psychological abuse at the hands of Sergeant Brand (Hilton Presser). Presser excels as the disdainful tyrant whose sole aim is to obliterate any sense of self within the soldiers. ‘You are no longer someone’ he declares to them, ambushing them into subordination by all manner of degradation, ridicule, gruelling training, often a beating for no other reason than whim. The antagonism then carries on relentlessly amongst the soldiers. Raging hormones and misguided masculinity has them act out on each other, vying for attention and one-upmanship.

Nick’s assimilation into this brutal and overtly masculine regime appears superficially easy. Keeping his head down, remaining as unobtrusive as possible; even outshining himself when he traps and kills an Angolan soldier in battle. Presumably, tricks of the trade learnt from a troubled past. A flashback to a summer by the swimming pool in his early teens sees his burgeoning homosexual desire innocently surface only to be violently reprimanded in front of his own parents. This sensation of shame permeates throughout Moffie, a constant in Nick’s barely lived life. Not just limited to the to the army’s treatment of suspected homosexuals, rendering them clinically insane, but also for its overall normalised humilation of soldiers into subservience. Let alone the personal shame such as the rejection from Nick’s first ever crush on fellow soldier Dylan Stassen (Ryan de Villiers) a relationship which initially showed great promise only to falter with the emergence of self-loathing.

Strappingly handsome Stassen conjures a mixture of excitement and caution. Supressed desires let loose during a midnight drill of digging up trenches in the rain, a reluctant Nick succumbs to Stassen’s unexpectedly alluring calls to cuddle for body heat. The intimate moment sparks an infatuation, yet fear keeps everything under lock and key. Its only when Stassen makes another unexpected move, Nick irrepressibly responds. Their dalliance, however is short-lived as Stassen inexplicably finds himself in ward 22, the miltary’s dreaded psychiatric ward.

Hermanus’ story and its execution are too perfectly crafted and hyper-realistic to resolve itself into some improbable closure, despite the director’s best efforts to showcase absolute beauty, even in the gruesome of moments. The ongoing brutality and arduousness of Nick’s military experience leaves its permanent scars. Compounded further when he seeks out Stassen post conscription, who is even more scarred and detached, the potential love finds itself at a dead-end. There is repreive however, what appears to be a universal bittersweet theme for the gay experience, that through all the adversity Nick has found self-acceptance.

Moffie is out now on Curzon Home Cinema.