The streets of Victorian East London must have been a pretty scary place. Before the trendy bars and artisan coffee shops, it was full of dark alleyways, smoky air, questionable characters, and of course murder. It is the latter that The Limehouse Golem is concerned with. Set in Victorian London, Inspector John Kildare (Bill Nighy) […] 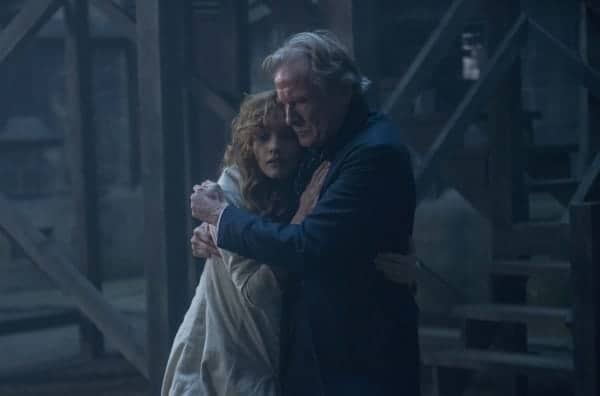 The streets of Victorian East London must have been a pretty scary place. Before the trendy bars and artisan coffee shops, it was full of dark alleyways, smoky air, questionable characters, and of course murder. It is the latter that The Limehouse Golem is concerned with.

Set in Victorian London, Inspector John Kildare (Bill Nighy) is tasked with catching the notorious Golem murderer, who has struck terror throughout the Limehouse district of the city. When John Cree (Sam Reid) is poisoned, his wife, the music hall performer Elizabeth Cree (Olivia Cooke), is blamed and Kildare starts to investigate believing the murder is connected to the Golem.

The publicists have made a point for the plot turns not to be revealed and even though the ending may not be revelatory it is enough of a twist to given a satisfactory climax. The film is actually well structured and has good pacing, with suspense building as events unfold. The plot, based on a book by Peter Ackroyd, broadly follows real life events and is genuinely intriguing. The dialogue could be better but on the whole the story is enjoyable.

It would have been interesting if the motives behind the murders had been delved into properly. The societal ills of the Victorian inner city must have created extremes in character and there was potential for an interesting character study to be developed. Instead what is produced is a much more traditional period detective story.

The Limehouse Golem does have a few other limitations. Chief amount them is the poor and misjudged use of humour. The music hall sequences, despite being comic at the time, do not translate to modern tastes and like the rest of the film never made me laugh. There are also unfortunately a couple of homophobic jokes that I am disappointed to see make the final cut. There is no need to question Inspector Kildare’s sexuality when it is irrelevant to the plot. Similarly, aspects of the script that try to discuss the empowerment of women are undermined by unnecessary nudity that only seems to be included for the male audience.

The unadventurous style does not help the film either. The cinematography is reminiscent of an ITV period drama or a pre-Cumberbatch adaptation of Sherlock Holmes. Each shot is very stuffy and something closer to Andrea Arnold’s Wuthering Heights would probably have been more suitable. It is a real shame that the camera work is so dull because underneath it is a surprisingly good story. The film ultimately looks worse than it actually is.

The Limehouse Golem may be more at home on television than in the cinema but it is still mostly enjoyable, even if an intriguing and well-structured story is hampered by lazy dialogue and stuffy cinematography. I was actually quite surprised by how much I enjoyed the film, but at the same time I’m disappointed because there is potential for it to be a lot better.