“This experiment could unleash chaos” remarks Donal Logue’s faceless news pundit about a third of the way through this unexpected, and frankly unnecessary addition to the Cloverfield saga. Though the first two films – 2008’s Cloverfield and 2016’s 10 Cloverfield Lane – didn’t share any direct DNA within their separate narratives, they did both function […] 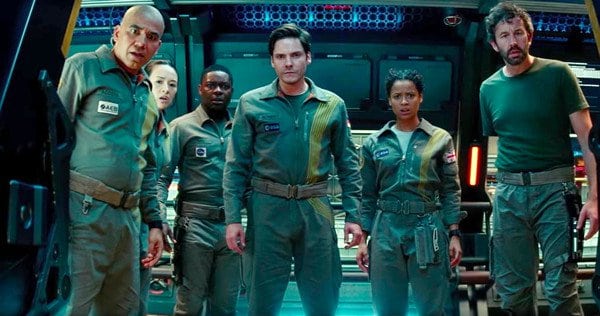 “This experiment could unleash chaos” remarks Donal Logue’s faceless news pundit about a third of the way through this unexpected, and frankly unnecessary addition to the Cloverfield saga. Though the first two films – 2008’s Cloverfield and 2016’s 10 Cloverfield Lane – didn’t share any direct DNA within their separate narratives, they did both function as effective post-9/11 paranoia pieces; melding blockbuster thrills with timely considerations on how we can feed on and be consumed, both individually & collectively, by fear.

It would appear, however, that J.J. Abrams – whose ‘Bad Dog’ production company has been closely involved in the making of all three Cloverfield films – has far grander, and one would also argue more misguided plans for this growing franchise, which brings us neatly on to The Cloverfield Paradox. Released on Netflix in the early hours of a Monday morning, the trailer having dropped during the Super Bowl halftime show earlier that night, this hot mess of a film looks to add key contextual details to the franchise canon, presumably in the hope that it will allow the series to run and run – rumour has it a fourth film, set during World War Two, has already been completed and is slated for release later in the year.

Beginning in the weeks leading up to the events of the first film, it introduces us to a world on the brink of war; our energy supplies having depleted to such an extent that our hopes now lie solely with a particle accelerator device that’s orbiting the earth on a space station manned by Captain Kiel (David Oyelowo), and his broadly-drawn crew of international scientists (read: stereotypes). They include: Gugu Mbatha-Raw’s Hamilton (damaged & vulnerable), Daniel Brühl’s Schmidt (shifty), Ziyi Zhang’s Tam (feisty), Chris O’Dowd’s Mundy (funny), and Aksel Hennie’s Volkov (the token sinister Russki). Should the accelerator succeed, it will solve the energy crisis indefinitely. But, following yet another unsuccessful test of the equipment, the team suddenly find themselves mysteriously transplanted into a dark, alternative reality, with no means to contact Earth.

A sloppy subplot involving Hamilton’s husband Michael (Roger Davies), navigating the New York suburbs following the monster attack of the first film, is shoehorned into Oren Uziel’s stodgy screenplay in a desperate attempt to link the material back to the original Cloverfield – a clumsy manoeuvre that’s reminiscent of Ridley Scott’s tactless attempts to implant Prometheus within the Alien mythology. Indeed, all it reveals is that in spite of mystery surrounding this franchise, there just isn’t enough intrigue within the actual narrative to competently hold either your attention, or that of the cast; all of whom appear desperate to be free of this stratospheric bore.

For all its visual sheen – director Julius Onah certainly makes apt use of his effects budget – the film is a slog, weighed down by countless scenes of baggy exposition, and a number of bemusing set-pieces – including an amputated hand cruising the corridors of the space station like it’s an extra from The Addams Family, and Elizabeth Debicki appearing within a wall – that wouldn’t look out of place in a direct-to-DVD release. As an experiment in franchise acceleration, The Cloverfield Paradox feels like a monstrous failure; devoid of any excitement, it’s a film where chaos reigns supreme.