While those of you on this side of the pond are unlikely to be familiar with A Wrinkle In Time: Madeleine L’Engle’s seminal YA novel, originally published in the early 60s, and the first instalment in her highly lauded ‘Time Quintet’ series. Over in America the book is something of a childhood mainstay, studied in […] 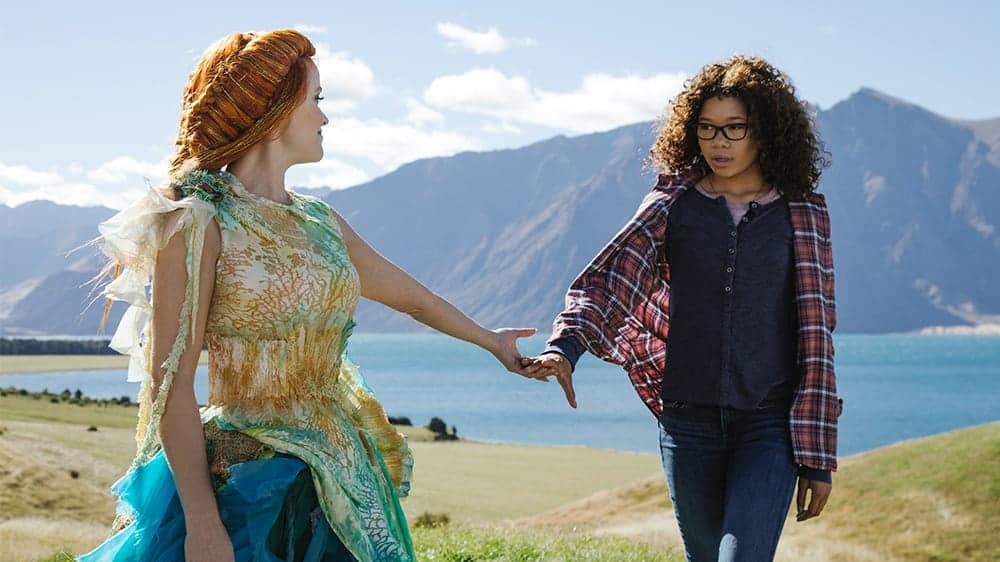 Reese Witherspoon is Mrs. Whatsit and Storm Reid is Meg Murry in Disney’s A WRINKLE IN TIME.

While those of you on this side of the pond are unlikely to be familiar with A Wrinkle In Time: Madeleine L’Engle’s seminal YA novel, originally published in the early 60s, and the first instalment in her highly lauded ‘Time Quintet’ series. Over in America the book is something of a childhood mainstay, studied in classrooms for more than fifty years now, and beloved by many for its intellectual & emotional underpinnings.

This warm-hearted and well-intentioned adaptation from Ava DuVernay – the first Hollywood blockbuster with a budget of $100million to be directed by a woman of colour – may not be the runaway success many were hoping it would be, but it’s hard not to be impressed by how the director gamely tries to craft a cohesive piece of cinema from the intricacies of L’Engle’s complex narrative.

It tells the story Meg Murry (Storm Reid), and her younger brother Charles Wallace (Deric McCabe), both of whom are struggling to adjust to life at home and at school after their father Alex (Chris Pine), a well-renowned scientist specialising in Astrophysics, mysteriously vanished one night while investigating whether it was possible to teleport between galaxies. Contrary to the opinion of others, Meg, Charles Wallace, and their mother Kate (Gugu Mbatha-Raw) believe Alex’s disappearance to be directly linked to his field of study; that he was able to use a concept known as a “tesseract” to travel to another world, but was unable to return.

Then, one day, Meg and her brother are contacted by a trio of astral travellers – Mrs. Whatsit (Reese Witherspoon), Mrs. Who (Mindy Kaling), and Mrs. Which (Oprah Winfrey), collectively known as the “Mrs” – who reveal that Alex has been captured by an enigmatic entity known as “The IT”, which is malevolently plotting to take control of the universe. Joined by Meg’s classmate Calvin (Levi Miller), the group set-off across space and time, guided by the Mrs, to save Alex from The IT’s evil grasp.

Less Interstellar for infants, and more a woke Wizard of Oz, DuVernay’s dizzying ambition is apparent in every frame, in spite of the twee, Disney Channel aesthetic, and markedly uninspired CG-heavy landscapes; the garishly-coloured Pandoran surroundings that Meg & co. travel to seemingly based on rejected designs from Cameron’s Avatar. Likewise the script, written with a soulful energy by Jennifer Lee and Jeff Stockwell, regularly appears overwhelmed by dialogue that’s heavy with exposition, and a plot so convoluted that at times it’s impossible to make sense of.

There’s a vigour and invention to DuVernay’s vision, though: Meg’s adventure bursting with an insane creative wonder that can’t help but leave you smiling with a crazed grin. This is a film where Oprah is introduced as a towering projection that fills the screen, where an underused Kaling communicates almost exclusively through the words of others, and where, at one point, Witherspoon bizarrely morphs into a piece of flying foliage as a mode of transportation. And somehow, by the end, it all becomes so bamboozling that such occurrences begin to seem normal.

What grounds film, ultimately, is its central performance: Storm Reid’s spirit and sensitivity instilling A Wrinkle In Time with an emotive core that juxtaposes the various artificial environments with a sense of naturalism and honesty. Her pain is genuine, and her strength so formidable that she carries much of the film singlehandedly. The message Meg’s journey imparts is one of hope and empowerment, encouraging its young audience to always believe in themselves, even in times of great hardship. It’s an endearingly wholesome lesson, so potent, so intensely profound when viewed against the backdrop of the film industry’s ongoing conversation about the need for diverse representation & gender equality. And thanks to the command of Reid’s remarkable work, it’s delivered with a thunderous authority.