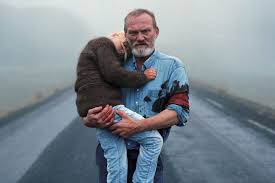 In a previous life, I used to work as music publicist. I remember the UK music press used to gag over anything that came from Iceland. Perplexed by their immediate response, I coined it the Bjork effect. This already pre-agreed expectation that music artists from this particular frosty Scandinavian isle were automatically considered cool, edgy, ethereal, artistically conceptual but all done under the guise of subtlety and Nordic quirkiness. Admittedly, more often than not, these bands were very good and possessed the aforementioned qualities, but for me it was this pre-existing notion that got under my skin, it whiffed of contrivance and affectedness. Sadly, this bothersome sensation emerged whilst viewing Hvitur Hvitur Dagur (White White Day).

Ingimundur (Ingvar Eggert Sigurðsson), a police chief, is mourning the death of his wife. A year later, a box of her stuff comes to his attention only for its content to uncover a love affair she had with another man. The revelation sends Ingimundur spiralling into his inner dark depths, tortured by the menacing feelings of betrayal and revenge. His anger is steadily and inadvertently fueled by others incessant attempts to pacificy him, reaching its zenith when he proceeds to attack and imprison his colleagues, steals a police car in a bid to coerce his wife’s lover to reveal all at gun point.

There is much to praise about White White Day. Whether it’s the naturalistic portrayals, dramatic plot, the hyper realistic depiction of loss and psychological break down. The cinematography is stunning, utilizing the pervading thick fog and the volcanic coastal terrain, all brimming with emotive isolation reflecting Ingimundur’s melancholic psyche. Yet it’s within the visual element, that my frustrations lie. Particularly with Hlynur Pálmason’s directorial choices of introducing numerous extended interludes and various knowlingly understated camera perspectives, which undeniably are aesthetically pleasing, but are just too long and deviate from an otherwise solid narrative.

Perhaps these stylistic interjections wouldn’t be an issue if the film didnt possess such a lingering pace or they were simply shorter, but instead become conducive to an occasionally arduous viewing experience. An almost ten-minute-long distance shot in the opening scenes of Ingimundur’s makeshift house weathering all four seasons, or the prolonged finale of his granddaughter Salka (the praisworthy child actor Ída Mekkín Hlynsdóttir) on his shoulders making their way through a dark tunnel only to be finally interrupted by the closing credit or some random lengthy montages of each actor staring back at the camera. Thats just calling out few of such gratuitous scenes which have little to no bearing with character or plot.

Ingimundur’s moments of rage are truly captivating, an exceptionally raw performance by Sigurðsson, his lashing out takes on epic proportions and waking us up from the film’s underlyling low-level tempo. This illustration of mental unravelling is sufficient as a stand-alone story, perhaps sped up a tad, and Pálmason’s directing is exceptional enough without the superfluous aesthetic frivolities. It’s this intentional artifice that encouraged my biased judgement, questioning what could have been a truly special film.