By Linda Marric What more is there to be said about The Beatles that hasn’t already been said before. In It Was 50 Years Ago Today! The Beatles: Sgt Pepper and Beyond, which by all accounts has the clunkiest title for a documentary you could ever think of, director Alan G. Parker offers a rather […] 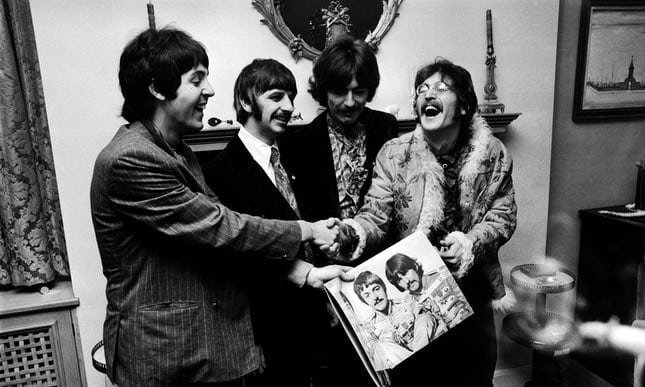 What more is there to be said about The Beatles that hasn’t already been said before. In It Was 50 Years Ago Today! The Beatles: Sgt Pepper and Beyond, which by all accounts has the clunkiest title for a documentary you could ever think of, director Alan G. Parker offers a rather disappointing, overly long, and altogether messy account of the band during the making of the eponymous album. The film also offers a look behind the scenes at the dynamics between the four members of the band during those turbulent times.

The story, which centres around the release of the legendary album Sgt Pepper and the myth surrounding it, starts with extensive footage of the band flying to America in the eye of an almighty sh*t-storm after the “we are bigger than Jesus” controversy. Parker offers numerous pieces of footage of the band being quizzed by irate American journalists, intercut with a series of talking head segments by mostly unknown writers, family members and biographers.

With his inability to secure the rights to any of the music or even the album’s artwork, Parker has to instead resort to a few candid moments of TV interviews from the era. This wouldn’t be so bad if he had managed to stick to one thread for more than 5 minutes; with a meandering narrative and a slightly jarring soundtrack, the director is sadly let down by his inability to offer a more coherent story. There’s an interesting “behind the scenes” look at the band’s relationship with the Maharishi during the making of the album, and the circus that followed that particularly bizarre episode in the band’s life, which is sure to raise a few laughs. But on the whole, the tone relies more on gossip and unfounded rumours than actual facts. By far the most objectionable section of the film is dedicated to the band’s manager Brian Epstein, who at the time was referred to by the press as the fifth Beatle. There’s abundant talk of Brian’s personal life and sexual orientation and goes into great details in speculating about his untimely death and what caused it. Epstein is portrayed as a promiscuous drug abuser who had stopped fulfilling his managerial duties the way he used to, which seems rather callous to anyone looking in from the outside.

The film isn’t without its moments, especially the very touching exchange with the band’s first drummer Pete Best and the numerous cheeky exchanges between the band members and the press, but this is nothing new and could have been achieved by making a more coherent film rather than an interminable, badly edited production. Fans of the band I’m sure will find something new and are likely to lap it up, but just don’t go in expecting to hear any Beatles music, because you will be greatly let down.

It Was Fifty Years Ago Today is in cinemas from Friday 26th May.