By Michael McNulty John Goldschmidt’s Dough, penned by first time scriptwriters Jonathon Benson and Jez Freedman, feels like an afterschool special that’s trying to take on too much. Race, religion, culture and age, the differences, the divisions, the need to look past them all and come together is what this film is all about, with […] 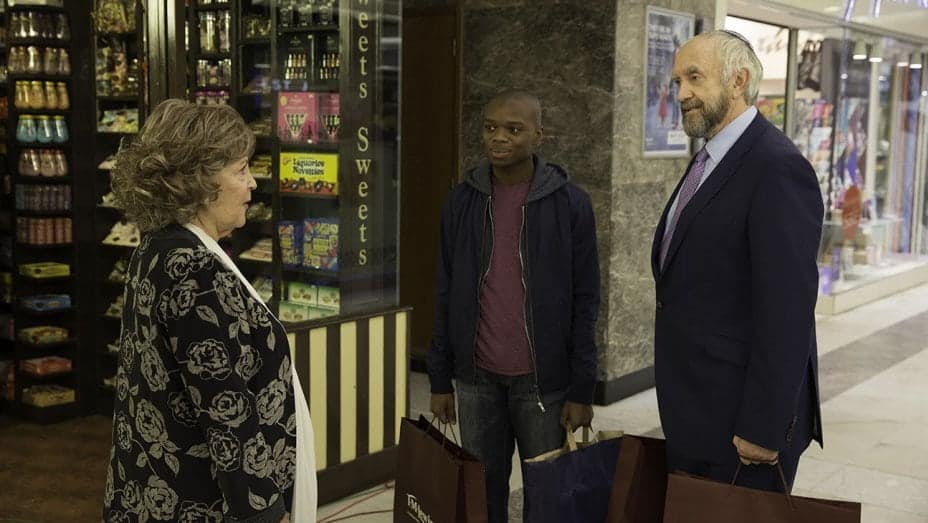 John Goldschmidt’s Dough, penned by first time scriptwriters Jonathon Benson and Jez Freedman, feels like an afterschool special that’s trying to take on too much. Race, religion, culture and age, the differences, the divisions, the need to look past them all and come together is what this film is all about, with a “save the shop” thread running through the middle.

Nat (Jonathan Pryce), an aging Jewish baker, with a dwindling customer base runs the risk of losing his business. To make matters worse his baking assistant quits. Desperately in need of some help he takes on Ayyash (Jerome Holder), a young Sudanese Muslim who, as it just so happens, is in need of a job himself.

You see Ayyash needs a cover job so he can deal drugs (because that’s where the real dough’s at) to get his Mum and himself out of their grotty estate. Don’t worry though it’s none of the hard stuff, just a bit of Mary Jane, which of course Ayyash doesn’t ever touch himself.

Enterprising young lad that he may be, the business don’t mix, or do they? Ayyash, in a moment of panic, has to stash the stash, but where, the dough mix of course. Before you know it Nat’s failing business is taking off and lines stretch around the block with people, both knowing and unawares, hungry for his baked goods. Amidst all the success, the tumultuous relationship Ayyash and Nat shared settles and the two come together realizing, “hey, although we’re pretty different, we’re not all that different.”

It’s formulaic writing that would have even Robert McKee cringing. The characters have about as much depth as a shallow puddle and as a result the performances are stunted. The predictability of the plot paired with the tired jokes make for dull viewing and the key take away (see above) is about as subtle as a punch to the face.

To make matters worse is the evil Sam Cotton (Phil Davis), owner of the Cotton shop franchise that’s slowly taking over the neighbourhood, maybe even the world, a character who could easily be transplanted into an episode of Whacky Racers or an 80s teen movie as the devious, plotting baddie with his dodgy haircut, pinched mouth and cackling laugh.

The whole thing is about as enjoyable as a stale bagel.

Dough is on general release from 2nd June.