Set in 1967, Detroit opens with a police raid on an unlicensed club where the return of black veterans from Vietnam is being celebrated. Suspects are brought out onto the street and a mob forms around them. As the suspects are arrested the mob starts to through rocks at the officers and before long this […] 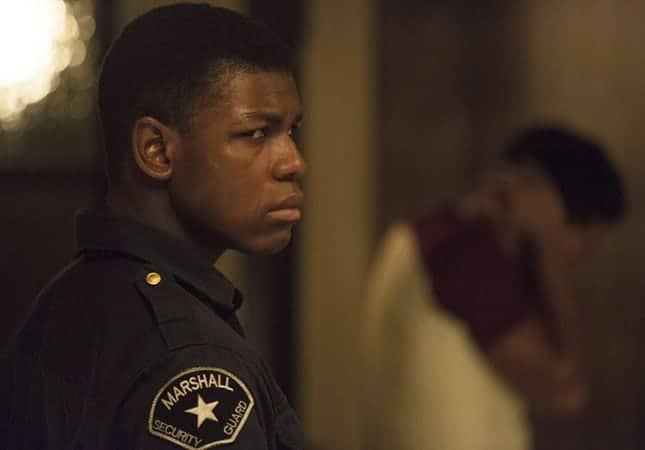 Set in 1967, Detroit opens with a police raid on an unlicensed club where the return of black veterans from Vietnam is being celebrated. Suspects are brought out onto the street and a mob forms around them. As the suspects are arrested the mob starts to through rocks at the officers and before long this escalates and the city is overrun by looting and fires. Army paratroopers and the National Guard are sent to aid the Detroit police. When a toy gun is shot out a window of the Algiers Motel it is mistaken for a sniper and the police arrive and begin to interrogate those staying there in increasingly violent ways.

There is free flowing structure to the narrative that moves freely between characters and events in a manner reminiscent of Robert Atlman’s Nashville or Short Cuts. A brilliant central performance from Will Poulter, playing the trigger happy policeman Philip Krauss, in many ways holds the film together as we weave through the city. It is the kind of role that could shape a career and see Poulter in the years to come become a very prominent actor. The rest of the cast are good, even if for the most part none of them stand out.

Director Kathryn Bigelow over recent years has received much acclaim for her war films The Hurt Locker and Zero Dark Thirty. Despite its contrasting setting Detroit is in many ways another war film, set in a city where its black population are in battle against the police. On several occasions Detroit is even described as a war zone.

The city is shown as a place where compromise is no longer an option. This is best illustrated through Melvin Dismukes (John Boyega), a black security guard who tries to work alongside the racist police. Ultimately this stance gets him nowhere and he is even punished for crimes he did not do. Similarly, towards the start of the film black politician John Conyers can be seen trying to convince the crowds that change is coming and that rioting is not necessary as progress is being made. Placing issues of police violence in a period setting highlights the inaction that has occurred since and how promises have been repeatedly broken.

The cinematography from Barry Ackroyd, who also worked on The Hurt Locker, is very grainy and does give a period feel. The decision to include real life images and news articles from the time only adds to this. It is an effective move that draws direct lines between the actual events and what we see in the film.

The only real issue with the film is the overly long central sequence. Set in a hallway within the Algiers Motel, we see those staying in the building held captive and brutally beaten up by the police. It is a shocking act of violence and to begin with it is an emotionally powerful scene. The problem is that with each beating the shock lessens. We can prepare ourselves for what is about to happen and by the end what should be a loathsome act instead feels repetitive. I feel that a more sensitive approach should have been taken, one that would have contrasted the brutality with quieter moments.

Detroit is a beautifully shot and generally well told look at the race riots that engulfed the city in 1967. The film may be too long and the violence can become repetitive, but at its best Detroit is effectively able to show that the wounds displayed still have not healed.

Detroit is in cinemas from Friday 25th August.