By Linda Marric Black magic rituals and all manner of creepy shenanigans take centre stage in Liam Gavin‘s terrifying indie horror A Dark Song. Written as well as directed by this first time Irish director, the film offers a fresh twist on the “haunted house” genre, and takes its audience through a terrifyingly visceral journey […] 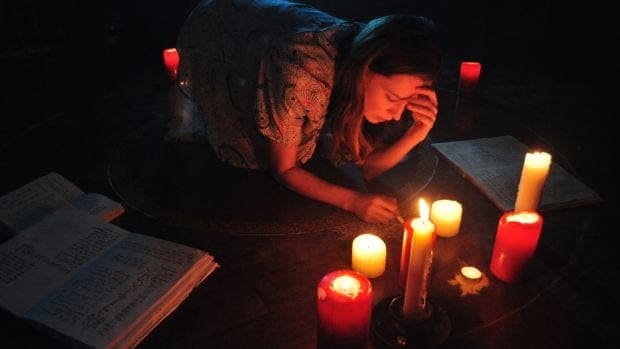 Black magic rituals and all manner of creepy shenanigans take centre stage in Liam Gavin‘s terrifying indie horror A Dark Song. Written as well as directed by this first time Irish director, the film offers a fresh twist on the “haunted house” genre, and takes its audience through a terrifyingly visceral journey in search of the occult and of the dark arts of necromancy.

Sophia (Catherine Walker), is grief stricken after the violent death of her only child; unable to get over her loss and desperate for closure, she reaches out to grumpy occultist Solomon (Steve Oram) to help her speak to her child for one last time from beyond the grave. Moving into a grand old house in the middle of nowhere, Sophia and Solomon begin their journey into the unknown by practicing repetitive rituals, fasting and arguing with each other non-stop. Oram (Sightseers, 2012), is at his most objectionable as Solomon, he bullies, manhandles and often has very little to say to his companion. His contempt for her quest grows stronger when he realises that she hasn’t been completely honest with him. Oram is as terrifying as he is compelling to watch, his delivery is faultless as a man who has only ever known darkness in his life. He berates, insults and even threatens Sophia’s life, but somehow manages to remain sympathetic to the audience. Catherine Walker’s delivery may not always be en pointe, but she manages a mammoth task with a screenplay which genuinely puts her and her character through the wringer, physically as well as mentally.

Gavin manages to mostly hit the right notes in this moody art-house horror, he uses his protagonists’ less than orthodox relationship to convey a sense of unease within the narrative. As the duo go through months of arduous rituals, things around them start to fall apart and their lives take a turn for the worst. It is precisely at these moments that Gavin excels at conveying the horror of the unknown and the deterioration of two human beings brought together by grief and sheer stubbornness. Playing with the usual themes of creepy children and creaky haunted houses, A Dark Song, is a heavy watch, but nevertheless manages to keep its audience on tenter hooks till the very end.

With a dialogue which can sometimes feel a little too forced, A Dark Song may not be perfect, but its nightmarish imagery carries the film on the strengths of the scares alone. Never resorting to the usual scare-jumps favoured by certain horror franchises, Gavin manages a brilliantly nuanced and genuinely scary film which may terrorise you, but is never likely to bore you.

A Dark Song is on general release from Friday April 7th.