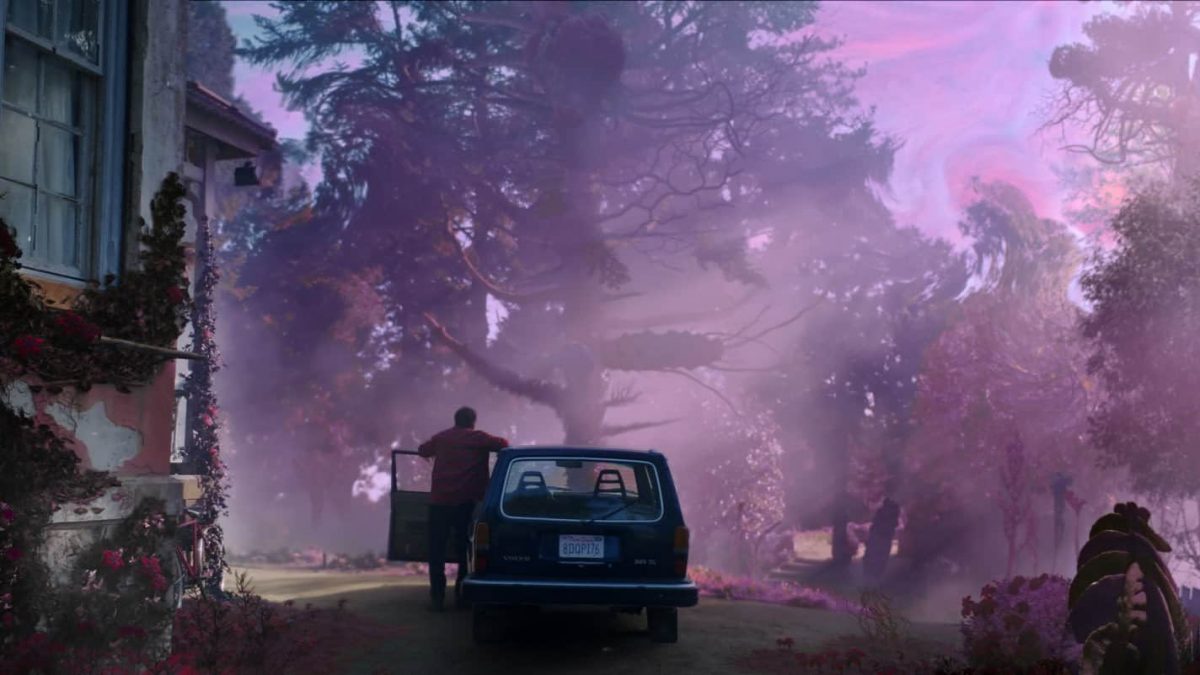 Longtime Hollywood outcast sci-fi director Richard Stanley’s Color Out of Space is further proof that H. P. Lovecraft’s work will probably never be adapted more appropriately for the big screen than in Re-Animator.

If we can learn anything from the last 40 or so years in cinema history, it’s that when a mass of alien matter falls from the sky into someone’s front garden, the result is rarely harmless Spielbergian wonderment. In Color, the stage is set for maximum Cage rage when a meteorite with a strange glow plonks down on the grounds of the Gardners’ country house in woodsy Arkham, Massachusetts, where the head of household happens to be bourbon-swilling patriarch Nathan (Cage). He presides over his work-at-home wife Theresa, his practicing Wiccan daughter Lavinia, his Jack White- impersonating son Benny, and his youngest, Jack, a budding dog-whisperer of sorts. The Gardners had moved to the country to escape the evils of the city and raise alpacas—a recipe for disaster if there ever was one—and presumably to provide a more welcoming arcadian environment for their daughter to practice spell casting.  Without giving too much away, let’s just say the Gardners’ new pet astro-boulder turns out to be even more destructive than the meteorite in Creepshow whose surface ooze eventually turned Stephen King into some sort of oversized chia pet.

But never fear, Nic Cage is here. Cage’s so-called Nouveau Shamanic acting style is in full effect by the second half of the film. The actor’s oddball guerilla thespianism proves well suited to the task of battling the alien menace here; he ably handles a shotgun and mouths ridiculous lines that seem to drive away all forms of life, alien and otherwise. Anyway, it’s a good bet that the brand of cosmic horror Cage is confronted with in the film is probably nothing he hasn’t already experienced while living in Glastonbury.

Unfortunately, the body horror that the Gardners’ meteorite eventually wreaks on the family is presented in such an indulgently inorganic way that it’s damn hard not to laugh at all the Commodore 64-worthy FX geekery happening onscreen: The film’s Razzie-ready visual attributes tend to fall somewhere in the aesthetic black hole between Xanadu and Star Trek: Insurrection. Although Color is clearly visually influenced by Rob Bottin’s spider-legged heads and alien-mutated dogs in 1982’s The Thing—all brilliantly assembled from food products and assorted garbage—Color never reaches the same level of gruesome sophistication.

In fact, Thing director John Carpenter was a big Lovecraft devotee himself, and fittingly a similar nihilistic tone (or “cosmic indifferentism” in Lovecraftian terms) surfaces in Color. Except that Color Out of Space has taken 20th-century cosmic nihilism and updated it to 21st-century comic nihilism, which pairs better with avocado toast and Brooklyn Lager. Which means we can all get a good giggle out of the idea that unknowable, indifferent quasi-Lovecraftian forces in the universe have all kinds of horrible shit in store for us here on Earth. Lucky, though, we have Nic Cage and Nouveau Shamanism to battle such formidable otherworldly foes on our behalf. Take that, coronavirus.