By Linda Marric @linda_marric Tempers run high and relationships start to instantly disintegrate in Ben Parker’s claustrophobic thriller The Chamber. Set in a single location, the film offers a promising premise, but sadly falls short of bringing anything new to the horror/thriller genre. Trapped in a small submarine off the coast of North Korea, four […] 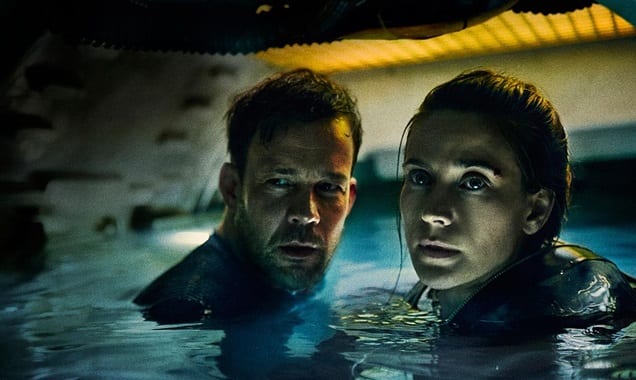 Tempers run high and relationships start to instantly disintegrate in Ben Parker’s claustrophobic thriller The Chamber. Set in a single location, the film offers a promising premise, but sadly falls short of bringing anything new to the horror/thriller genre. Trapped in a small submarine off the coast of North Korea, four people must find a way of getting back to the surface before it’s too late.

With a small budget and even smaller cast, The Chamber centres around a special ops unit who commandeer a commercial research vessel and demand to use the small submarine it is carrying, for a yet undisclosed mission. When Swedish submarine pilot Mats (Johannes Kuhnke) is ordered by his captain to escort the group to the bottom of the sea-bed in search of of some data, Mats grows suspicious of the group’s real intentions and is reluctant to help, but must follow orders nevertheless. Things quickly descend into chaos as the group, made up of two men and their female superior, detonate a bomb causing them to be cut off from the surface. Trapped and losing oxygen, the group must put their differences aside and try to find a way back to the surface.

Staring alongside Johannes Kuhnke, are Charlotte Salt as the ballsy no-nonsense female officer nicknamed Red, and James McArdle as the hot-headed “won’t take orders from a woman” Parks. But perhaps one of the most convincing performances falls upon the brilliantly underrated Elliot Levey in the far more sympathetic role of technician Denholm. Levey as Denholm tries his best to reason with the waring sides and offers a more nuanced performance than the rest. Beside Levey and a thoroughly enjoyable turn from Kuhnke, the rest of the performances and overall story arc leave a lot to be desired, resorting instead to worn-out tropes and a predictable plot.

With the majority of the action taking place in the tiny submarine, which is no bigger than the back of a small van, the film manages to depict a realistic feeling off claustrophobia and fear. Despite the script’s shortcomings, props must be given to Parker for showing great directorial expertise by managing to realistically depict what it is like to be trapped in a confined space with the clock ticking. Added to the real technical processes of filming in confined spaces with a very small budget, The Chamber manages an impressive feat. Having said that, the film does suffers from some serious pace issues and when the ending comes, it somewhat feels a little rushed which in turn renders the plot a little less believable.

All in all The Chamber fulfils most of what it set out to do, perhaps too neatly at times, but on the whole, for a small budget production, the film manages to keep its audience on tenter hooks till the very end, so for that alone, it is well worth the watch.

The Chamber is on general release from Friday March 10th.