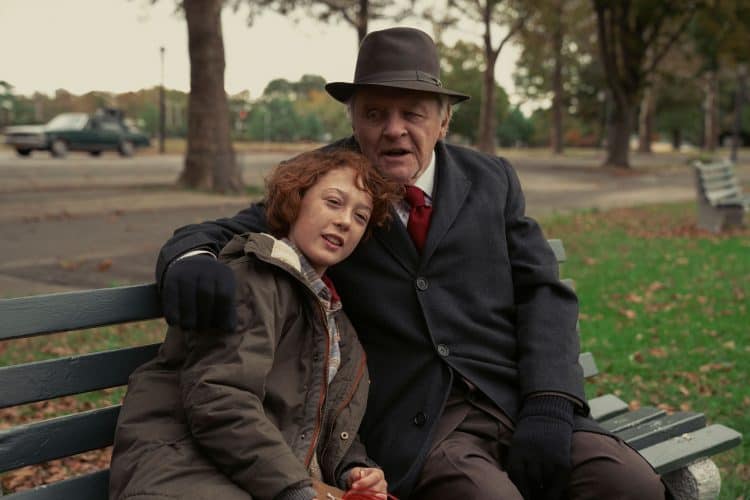 In recent times the acclaimed American indie auteur, James Gray, has opted for epic spectacles taking place in 1920s New York (The Immigrant, 2013), the Amazon jungle (The Lost City of Z, 2016) and outer space (Ad Astra, 2019). His latest, though set in early 1980s Queens, is a return of sorts to the family-focused dramas which made his name.

Young Paul Graff (Michael Banks Repeta) is a daydreamer. At school, he gets into trouble for drawing instead of listening to the teacher. Marked as a bit of a troublemaker and thick, his despairing parents, Esther (Anne Hathaway) and Irving (Jeremy Strong), decide to send him to boarding school (paid for by his grandparents and with Irving’s wage as a plumber). It is not something Paul wants, but his parents drum into him they’re making huge financial sacrifices so he can get opportunities they could not. The only person in the world who appears to understand Paul, is Aaron (Anthony Hopkins), the lad’s grandpa. The kindly English émigré imparts upon Paul words of wisdom about looking out for others and following your dreams. If this sounds corny as hell, it really isn’t. In Hopkins’ hands, it becomes deeply affecting and beautifully acted.

Armageddon Time (2022) doesn’t opt for big gestures. It’s a subtle and masterful social drama, a film of finely tuned little details reverberating with crucial pangs of truth and biting reality. A coming-of-age tale depicting duelling philosophies and the paths in life both made for us and those we choose, it’s also about navigating the class system and how a family strives to shed its lowly immigrant origins and become assimilated Americans. The Graff family is Jewish and Paul begins to learn more about antisemitism, the pogroms Aaron’s mother fled, first to England then America, and how his family arrived in “the land of dreams” as Aaron calls it, dirt poor. Through hard work, they managed to traverse the class ladder, going from abject poverty to working class to middle class, but pressures and humiliations abound still, like it’s a lingering stink they can’t scrub clean. And like a lot of immigrants, they changed their Jewish last names to something more American sounding.

There is something … not bitter, but certainly disquieting about Armageddon Time. Gray further illustrates this ill-ease with his homeland in the contrasting story of Jonathan (Jaylin Webb), Paul’s African American friend at his first school. ‘Johnny’ stands even less of a chance of making something of his life. He has nobody but a sick grandmother and no prospects because he’s written off by everyone. James Gray’s Armageddon Time is a certainly an anti-nostalgia period piece, a film not exactly wishing to make a direct statement on America as failing miserably in its ideals, as it will always be the land of dreams, to quote Aaron, but through the eyes of Paul he begins to twig the world is a difficult and sometimes not very nice place.