By Linda Marric  @linda_marric After 25 years spent as a camerawoman on various award winning documentary features, Kirsten Johnson amassed hours upon hours of outtakes and candid moments from her trips to Bosnia, Kabul and Darfur, to name but a few places. Born out of this was a truly unique piece of filmmaking. In Cameraperson […] 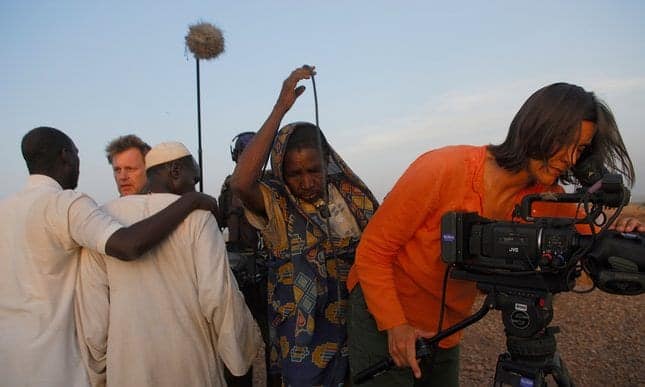 After 25 years spent as a camerawoman on various award winning documentary features, Kirsten Johnson amassed hours upon hours of outtakes and candid moments from her trips to Bosnia, Kabul and Darfur, to name but a few places. Born out of this was a truly unique piece of filmmaking. In Cameraperson Johnson offers an authentic look at some of the most touching as well as some of the most harrowing accounts witnessed by men, women and children in war zones around the world. The film also delves into Johnson’s own life and her relationship with her parents throughout the years.

Cameraperson is fantastically understated. It is a non-fiction collage of a series of vignettes telling the story of unrelated individuals. Johnson offers almost no context to the work that is being shown and there is no spoon-fed narrative here; the context and people shown are simply recognisable by the places on which the action is taking place. From the harrowing accounts of the Bosnian war and the women raped at the hands of enemy soldiers, to the Kabul teenager recounting the death of his brother in a rocket attack, the film meanders through stories of struggle and hardship without the use of any narrating device bar a few subtitles here and there. The voices we hear and the faces we see tell the stories in full, even in cases where language is limited. Johnson takes on a fly-on-the-wall position, interjecting only every so often to ask a question or to offer a suggestion.

Despite the lack of connection between her subjects, we soon start to realise that these subjects have more than just Johnson in common; their harrowing experiences may have changed them forever, but they all have one thing in common, they managed to survive and tell their own stories of rape, death and loss. From the women huddled together in a Darfur refugee camp slowly trying to cut a tree down, to the young girl seeking an abortion in an Alabama clinic, Johnson treats every single one of her interviewees with the same attention she affords her own parents especially her Alzheimer suffering mother. She prods them about taboo subjects, she asks annoying questions, and is at times moved to tears by the things they tell her.

Despite being a highly ambitious project with some truly touching moments, Cameraperson can feel a little frustrating as it lacks any discernible plot – this however doesn’t take away any of the visceral reactions it manages to provoke in its audience. Johnson does a great job in relating to her subjects, which in turn allows them to open up to her. Although not without fault, Cameraperson will move you beyond expectation.

Cameraperson is in cinemas from Friday 27th January.