By Linda Marric @linda_marric Sharing the title of D.W Griffith’s 1915 racist ode to The Ku Klux Klan and white supremacy, Nate Parker’s The Birth Of A Nation’s message couldn’t be more different. The film tells the little talked about story of a slave rebellion in 1831 lead by Nat Turner, a literate preacher who […] 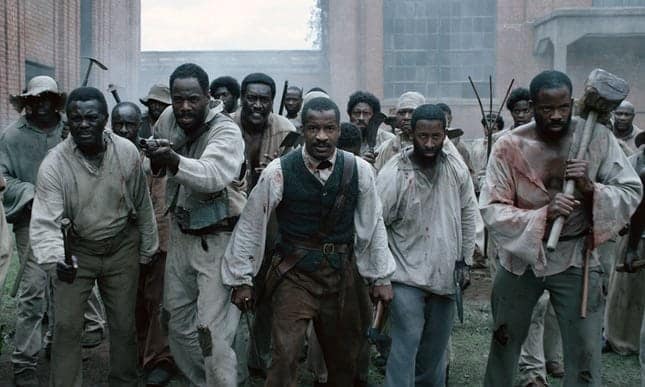 Sharing the title of D.W Griffith’s 1915 racist ode to The Ku Klux Klan and white supremacy, Nate Parker’s The Birth Of A Nation’s message couldn’t be more different. The film tells the little talked about story of a slave rebellion in 1831 lead by Nat Turner, a literate preacher who was born into slavery and singled out as a child by his master’s wife to learn to read and write.

As well as writing and directing, Nate Parker also stars in this courageously and unapologetically violent account of one of the most influential acts against slavery in American history. What is even more remarkable is that it is one of a few films of its kind to fully justify the “struggle by any means necessary” narrative and doesn’t shy away from depicting violent retribution in the quest of triumph of good over evil. It is also the first of its kind to avoid the “good slaver” trope seen before in films like 12 Years A Slave (2013) and Amistad (1997). First-time filmmaker Parker’s depiction of plantation owner Sam Turner, brilliantly played by Armie Hammer, starts off well enough with Sam being the protective master who inherits Nat from his father and who will do what is right by him without resorting to violence. This soon changes after a drought threatens his cotton plantation crops and his debts start spiralling out of control. When Sam is called upon by other struggling plantation owners to use Nat as a preacher to appease their rebellious workers, Nat and Sam travel from town to town meeting starving, brutalised slaves. While Sam is rewarded for his services, Nat soon learns that his struggle and righteous anger are shared by others like him. Spurred on by the brutal rape of his wife at the hand of slave-catchers, and the daily humiliation he and others have to endure, Nat leads a revolt which sees many plantation owners killed in their sleep by their angry slaves. Parker is highly convincing as Turner – he plays him with just enough reverence, seething anger, and tenderness all while managing to avoid predictably schmaltzy tropes. His character is motivated not only by faith, but also by a sense of doing what’s right for his people.

Parker’s use of Christian and African religious imagery and dream sequences where Nat is called upon to honour his ancestors are beautifully executed, as is a slow motion sequence of a little white girl playing with a black girl who she pulls by a rope around her neck, included several times throughout the film. This is one of the most powerful scenes in the film, away from bloodshed and the harrowing treatment of disobedient slaves, it is definitely this scene which will stay with you long after the film is finished.

Despite the initial buzz at Sundance earlier in the year and the intense bidding war that followed, the film appears to have suffered greatly from the controversy surrounding its writer/director. If you are willing to ignore the controversy, it is vital to point out the importance of this film and its stranding in America’s slavery history. Parker does an adequate job both as an actor and film-maker, and achieves what he sets out to do – to tell the story of a man whose courage and determination will live on for as long as people are willing to talk about his legacy.

Birth Of A Nation is in cinemas from Friday 9th December.