After a recent run of lacklustre form, the Judd Apatow brand has finally found its mojo again thanks to this tenderly handled rom-com from stand-up comedian Michael Showalter. While in recent years the output of Apatow’s production company – Trainwreck, This is 40, The Five-Year Engagement – has become synonymous with overlong runtimes and an […] 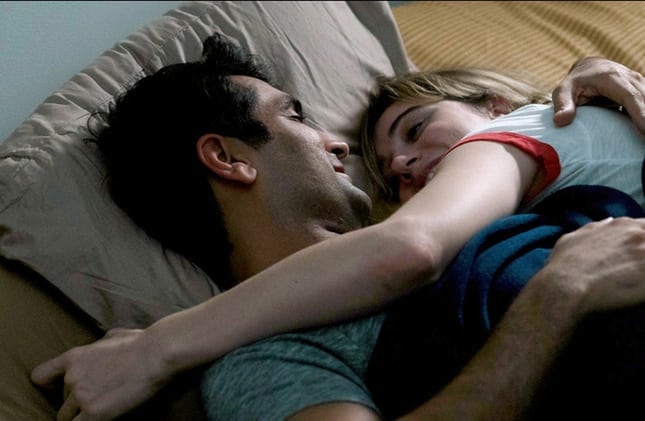 After a recent run of lacklustre form, the Judd Apatow brand has finally found its mojo again thanks to this tenderly handled rom-com from stand-up comedian Michael Showalter. While in recent years the output of Apatow’s production company – Trainwreck, This is 40, The Five-Year Engagement – has become synonymous with overlong runtimes and an unhealthy commitment to narrative convention, here’s a film that triumphs in staying true to the producer’s bittersweet spirit, whilst also subverting the genre’s formula with a poised yet playful composure.

The Big Sick begins, however, like all rom-coms, as a classic boy-meets-girl tale. Kumail (Kumail Nanjiani, uptight and shy, yet effortlessly charming), a Pakistani comic and pop-culture nerd – a Shaun of the Dead poster on the walls, and an X-Files ringtone on his phone – living in Chicago, meets Emily (Zoe Kazan), an American grad student, at one of his gigs. Their attraction is instant: sweet, affectionate, and teasingly sardonic. And though Emily is insistent that their evenings spent together equate to little more than a fling, the pair both soon find themselves developing stronger feelings for each other.

Inevitably, it isn’t too long before the pair find themselves faced by a number of formidable obstacles. Firstly in the form of Kumail’s parents (Zenobia Shroff & Anupam Kher) who, as devout Muslims, continue to believe in the tradition of arranged marriage, and, much to their son’s annoyance, regularly attempt to set him up with local Pakistani women – a practise that soon compels Emily to end their relationship after she discovers a box of perspective brides in his apartment. And then by a mysterious illness, which suddenly plunges Emily into a coma just days after their break up, forcing Kumail to confront her mother and father, Beth and Terry (Holly Hunter & Ray Romano), who, given the circumstances, remain highly sceptical of Kumail’s motives for wanting to stay and show support for their daughter.

Showalter, working from a script written by Nanjiani and his real-life wife Emily V. Gordon that’s based on the pair’s own courtship, masterfully adopts a similar tone to that honed by Apatow himself in the affectingly poignant Funny People. Many of the bigger laughs here come as a cathartic release during the narrative’s darker second and third act, manifesting most amusingly in the prolonged moments of awkwardness shared between Kumail, Beth and Terry; a conversation between the three about 9/11 being a gleefully uncomfortable standout scene.

Kazan, arguably, has the hardest job though, tasked with building a persona that remains present in the audience’s mind even after Emily has fallen into her coma. It’s a big ask, but one which Kazan responds to with a sparky charisma that endears Emily to us from the moment we meet her. Indeed, it’s a performance so strong that one couldn’t help but be disappointed that Nanjiani & Gordon’s script was so geared towards the male gaze; as is the case with so many similar films, the lead female sometimes comes across more as a cipher than a character in her own right.

Where The Big Sick does succeed, is in its exploration of the growing generational differences that are becoming evermore prevalent in the Western world. In a time when a US President can be cheered for encouraging anti-Muslim sentiment, here is a film that gently explores various cultural divides, like that between Kumail, who hold a more liberal attitude, and those of his conservative parents. The film’s plea, delivered with a refreshing honesty and unassuming humour, is one of unity, no matter what your race or gender, your religious principles or political beliefs. Despite its flaws, this may well be one of the year’s most crucial releases.