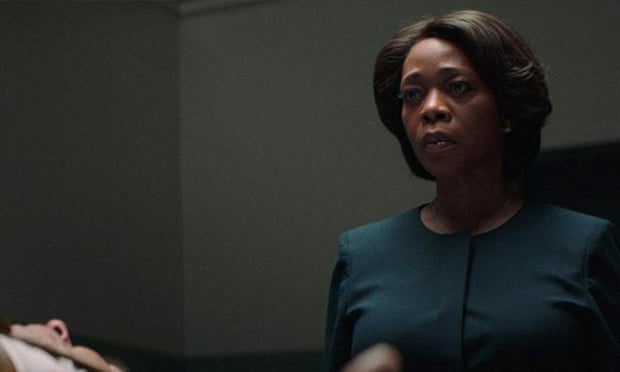 Warden Bernadine Williams (an impeccable Alfre Woodward) heads a prison, which carries out the death penalty. A diligent worker who has sacrificed her life and sanity for the sake of her job, finds herself in the throws of a personal crisis as deep-seated moral anxieties start to rear their ugly head.

Clemency opens amidst an executions, one which unexpectedly turns awry. The medic giving the lethal injection is unable to locate a vein and when he does, the stent comes out, blood is everywhere, the prisoner’s body starts to violently convulse. His death torturously prolonged to the dismay of onlookers, including his incosolable mother and Bernadine whose witnessing of this botched killing sends her into a downward spiral of self-reflection; the usually silenced inner voices of guilt start to reverberate, becoming louder and louder.

As another execution looms, its prospect becomes challenging. Prisoner Anthony Woods’ (Aldis Hodge) submissive and good-natured demeanour perplexes Bernadine; could he be innocent? even if not, do we have the right to kill someone? There is a continuous of muffled noise of protestors outside are a constant reminder of gulit, coupled with the desperate attempts by Wood’s earnest defence lawyer (Richard Schiff), cripple Bernadine.

Bernadine’s backstory is delicately inferred, a woman who’s spent her life in pursuit of painstaking perfection, more importantly as a black woman striving a place in higher management in possible the toughest of male-dominated environments. Her success comes with personal costs; her marriage on the rocks, a neglected husband, unable to sleep, turning to booze for solace.

Clemency’s pervading sombre mood IS attributed to the dimly light hyperrealist cinematography of Eric Branco, albeit expected by the gloomy subject matter. Director Chinonye Chukwu (the first black woman to win the Grand Jury prize at Sundance), draws things out in a very slow pace with minimal dialogue, using Bernadine’s big wide expressive eyes as the narrating vehicle. Bernadine’s evolving inner softening is seen through subtle stints, such as the lighting of colours and the increasingly loosened tailoring of her wardrobe.

Clemency does question the morals behind the death pernalty, providing a rare insight into the lives of those who carry them out, but perhaps the film further suggests that permanent imprisonment with the anticipation of death, is a more torturous outcome than death itself. Clemency is not an easy watch, disturbing even, but piognant nonetheless and a perfect example of flawless character acting. Woodward carries the film exceptionally, providing an in-depth characterisation without ever saying much; a sign of the actor’s immense talent and maturity.