By Linda Marric The very first time I came across The Belko Experiment was a few weeks ago through a controversial review in which an American critic explains why he felt the need to walk out of the screening of the film out of sheer despair and anger at the violence being shown on screen. […] 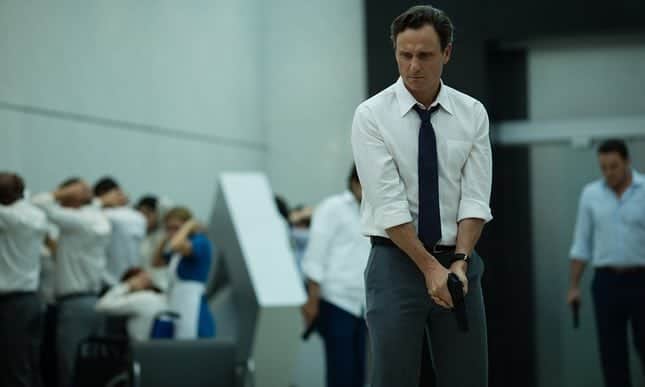 The very first time I came across The Belko Experiment was a few weeks ago through a controversial review in which an American critic explains why he felt the need to walk out of the screening of the film out of sheer despair and anger at the violence being shown on screen. As I am not here to judge another reviewer’s actions, I will instead attempt to justify why I didn’t completely hate the film, and why I found its kill-heavy content, silly, idiotic and at times, almost comedic.

Directed by Greg McLean from a screenplay by James Gunn (Guardians of the Galaxy, 2014), The Belko Experiment is a curious little production which is as nasty and as bloody as you might have heard. The action takes place in an office building for a big American corporation based in Bogota, Columbia. The movie opens with the firm’s employees making their way through the gates of the Belko compound which is unusually being manned by heavily armed guards, something which our hero Mike (John Gallagher Jr.) finds out of the ordinary. A few hours later, all hell breaks loose when an announcement over the PA system instructs the employees to kill two of their colleagues within the hour, or be killed one by one. Trapped in the building with nowhere to run to, the group find themselves in a cat and mouse game against time and each other.

With a screenplay which cannot quite decide whether it is all-out silly nonsense, or bona fide grizzly horror, The Belko Experiment is nothing short of sadistic, violent and altogether insidious, and yet it somehow manages to still be watchable. With a high-concept premise which purports to make a social commentary about the dog-eat-dog nature of office politics, the film only manages to excel on the strength of its eclectic cast and at funny repartee. Tony Goldwyn (Scandal) is at his best as the seemingly levelheaded boss, who later turns out to be motivated by his own agenda. The story falls into a chaotic “kill or be killed” mayhem, with the main thread or moral motivations of the story falling by the wayside. It is hard to believe that the same comic genius that gave us Guardians of The Galaxy could be so unimaginative as to have a plot as thin as this. And with a title which gives the game away almost instantly, it is difficult to feel any sympathy for its makers.

Having said all that, The Belko Experiment, whether we like it or not, is sure to find an audience amongst those mourning the heyday of video nasties. Despite its shortcomings in the decency stakes, the film nevertheless makes a compelling watch. Just don’t expect to learn anything of any substance or have your life be enriched by it.

The Belko Experiment is in cinemas from Friday 21st April.