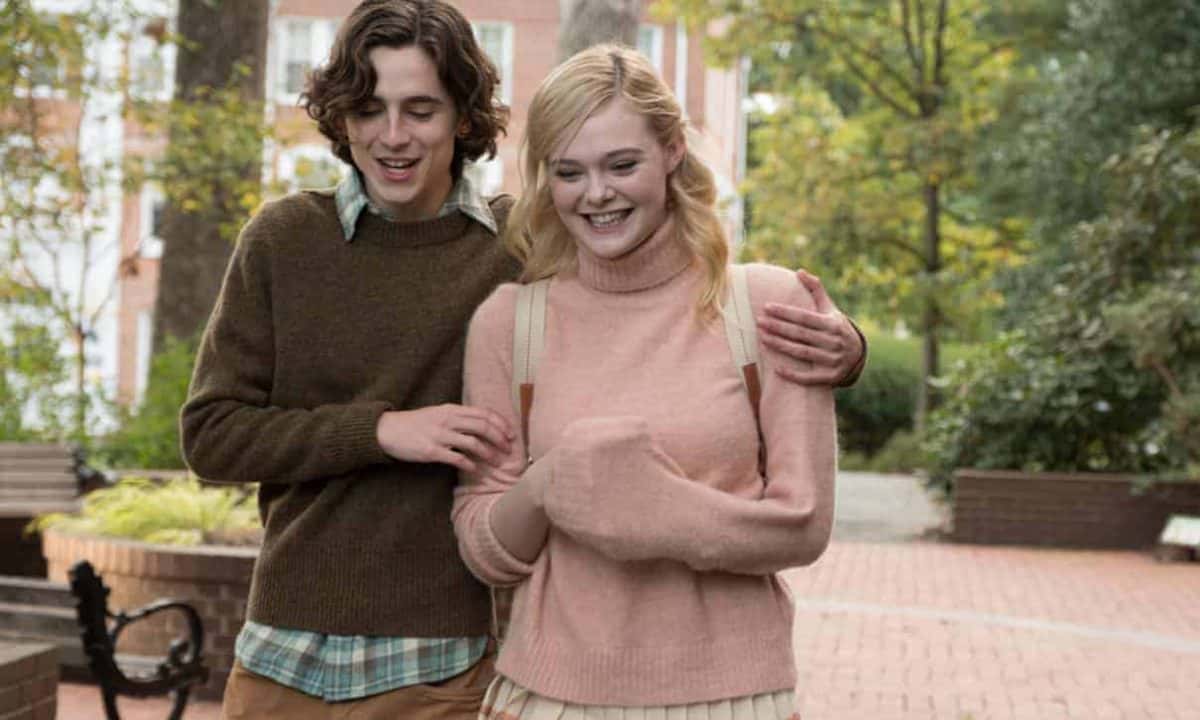 A Rainy Day in New York, Woody Allen’s latest release has proven to be his most successful in recent years, topping the VOD box office this past spring. Admittedly, its released amidst the Covid-19 pandemic with a dearth of any other cinematic output, yet its success comes in the face of resurfacing of sexual abuse allegations which have been plaguing Allen since the early 90s.

Its initial release back in 2018 was postponed, as its timing then couldn’t be worse in the height of the #MeToo movement. Amazon deemed the film unmarketable and decided to ditch the whole thing. Ensuing legal battles left Allen to shop the film around until it was released territorially this year. This two year gap between releases marks the longest hiatus for an Allen film since 1981.

Timothee Chalamet plays the lead Gatsby Welles. The actor himself has since denounced his participation in the film, donating his fee to various charities, yet it’s his celebrity that is a likely cause of the film’s success.

Chalamet attempts to embody the token Allen-esque central male character, if a somewhat watered-down version. The actor’s own semi-androgynous, teen boy pin-up geek chic is akin more to fashion editorials than a directionless art student. His fame and persona are too discernible to convince us of a Gatsby that is supposed to be a rambling, overly neurotic, self-absorbed, self-depreciating, quick-witted come poker prodigy. I see more of Allen’s personality tropes in Chalamet’s co-star Elle Fanning as the charmingly ditzy girlfriend Ashleigh. Capricious, bookish, clueless, naïvely indulging in every temptation that comes her way.

Ashleigh writes for the university paper and is granted unvetted access to world-renowned director Roland Pollard (Liev Schreiber). Gatsby decides to join her on her trip to Manhattan, hoping to make a romantic getaway of it. Inexplicably, both from wealthy stock, they take a cheap mode of transportation into the city, a Greyhound bus, yet stay in a 5-star hotel room overlooking Central Park. Such incongruous details are perhaps irrelevant, lest not forget this is a Woody Allen picture after all.

Once in Manhattan their paths immediately separate, finding themselves caught in these elaborately whimsical series of events. Whether it’s assisting a movie producer to spy on his cheating wife to having your mum declare her past as a sex worker. The outlandishness of these sub-plots is undeniably entertaining and come part and parcel with Allen’s universe. There’s a sense of transiency to scenes, characters and ideas put forward, possibly put there to reveal the cracks in the young couple’s ephemeral relationship.

A Rainy Day In New York harks back to the Woody Allen films of the 90s, the ones that are even more star packed as usual, such as Everyone Says I love You, Deconstructing Harry or Celebrity, where even the extras are well-known actors. Whether its Selena Gomez, Jude Law, Rebecca Hall, Diego Luna or Suki Waterhouse; each one peeking out from around the corner with their whacky behavioural ticks and two-cents-worth of wisdom. Reminding us of that familiar sensation; the nonchalant, joie de vivre and ludicrous characterisations that are perversely endearing and comforting, especially for someone like myself whose kept-up with Allen’s filmography over the years through thick and thin.

This other world of affluency, indulgency; a sexual liberal café society of sorts, where prostitutes rub shoulders with directors and professors in exclusive members bars. Post-coital cigarette talk of Camus and Baudelaire and characters making big bold life-changing declarations like ‘I don’t love her anymore; I hate her nasal laugh’. Admittedly it’s a privileged fantasy world, one that I realised growing up never really existed, in this context at least. A telling line by Chan (Selena Gomez) exclaims “real life is fine for people who can’t do any better’.

One could say Allen is out of touch, though a lauded and controversial career spanning over 50 years plus would definitely have that effect. But hyper-realist depiction is not what you seek out for in a Woody Allen film.