Everybody had a dream. When we were kids, we all had dreams of doing something with our lives. I wanted to be a pilot; others wanted to be doctors, actors or lawyers. Some achieve their dreams. Many don’t. And some people get to come home, flop on the sofa after a hard day’s work, and […] 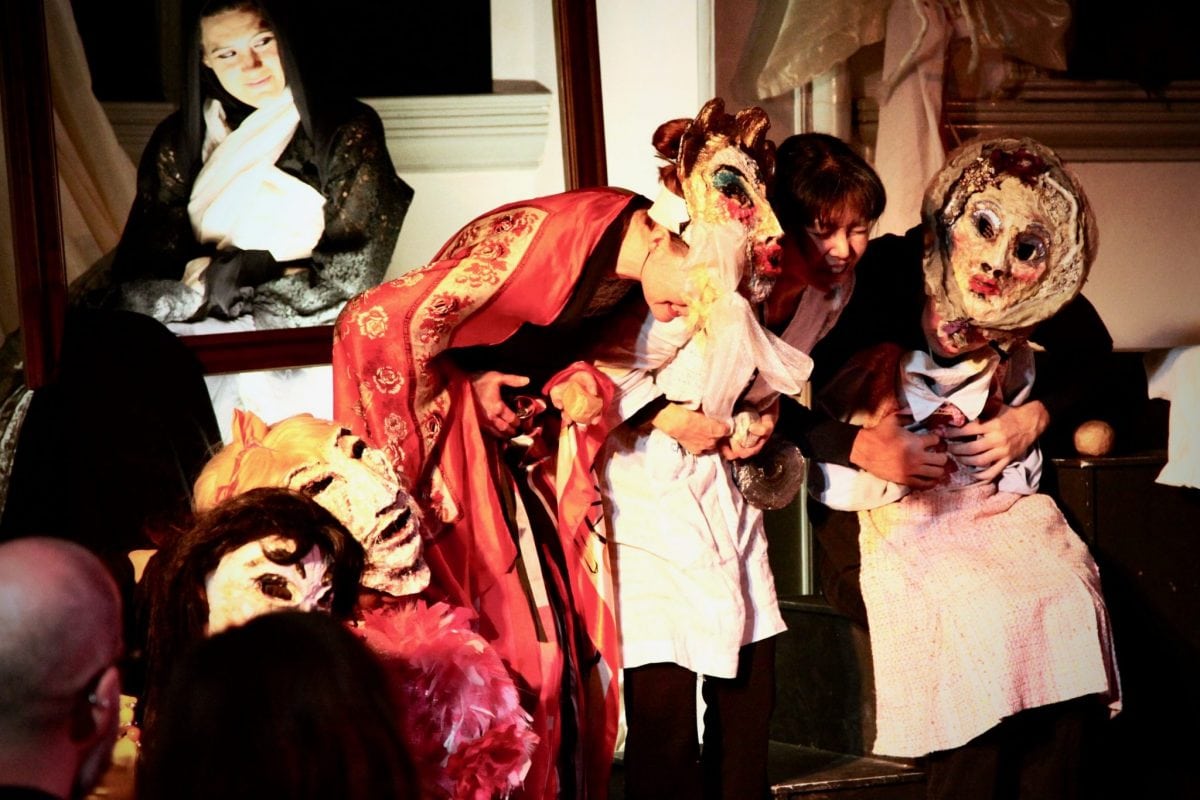 Everybody had a dream. When we were kids, we all had dreams of doing something with our lives. I wanted to be a pilot; others wanted to be doctors, actors or lawyers. Some achieve their dreams. Many don’t. And some people get to come home, flop on the sofa after a hard day’s work, and when their partner asks, “What did you do today baby?” they get to reply, “I finally finished knitting that damned penis, honey.”

The above – admittedly glib – remark does not fairly reflect the full panoply, the veritable cornucopia of nonsense that Bryan Woltjen designed and his little army of makers created for The Hearing Trumpet. The little Theatre Delicatessen in The Old Library is absolutely chock full of bizarre props, costumes, masks and set pieces – and the really fabulous thing is that it’s all brilliantly made. All totally mad, but brilliant nevertheless. Talent and love has been poured into these objects. It’s rather lovely.

That’s actually a good way of looking at the play in general – mad, but brilliant. Did I understand what was happening? Predominantly, no. Did it matter? Predominantly, no. Surrealism in general isn’t here to cater to our whims of wanting to know what the bejesus is going on, but Dirty Market has been kind enough to make the play so joyful, energetic and downright fun enough for it not to matter too much. Ostensibly The Hearing Trumpet is about an old lady who gets put in a home with a bunch of other old ladies. A fairly simple premise. But what if I told you you’d also encounter a sexy hermaphrodite nun, a song about potatoes, and an audience sized quota of fortune cookies? Now I’ve got your attention.

The Hearing Trumpet is based on a novel of the same name by Leonora Carrington, a British born surrealist artist who wrote the story in the 1950s as a gift to her friend. I haven’t read the book, so aspersions shall not be cast, but if it’s even half as bonkers as the play it is certifiably crackers.

How it is so successfully manhandled by the cast I can’t tell you, but it is a credit to them and to directors Georgina Sowerby and Jon Lee. Benedict Hopper as Mrs “Bing Bong” Gambit and Lizzie Clarke as Natasha Gonzales in particular are nothing short of hilarious. Harry Haynes’ Friar Jenkins is the perfect village vicar – all knee slaps, folded arms and mild hysteria – and played right on the line of reality.

It’s not perfect in its absurdity. It strays a little too far into the unknown even for me, friend of the eccentric, admirer of the bizarre. There’s a bit when the sexy nun turns into a bee that seemed to be a big turning point in the plot, but I couldn’t figure out why it was happening. Don’t get me wrong, she makes a great, and very resplendent bee, but a much better winking nun. One of the cast – names shall not be named – sounds exactly like Jim Broadbent as the Spanish translator in the much maligned Blackadder I, which although very entertaining, I’m not sure was entirely intentional.

Ah, don’t listen to me. Critiquing a play as potty as The Hearing Trumpet is like trying to catch a cloud and pin it down (maverick nun reference – check). If surrealism is your thing, I’d heartily recommend giving it a go. The crocheted nob alone is well worth a visit.