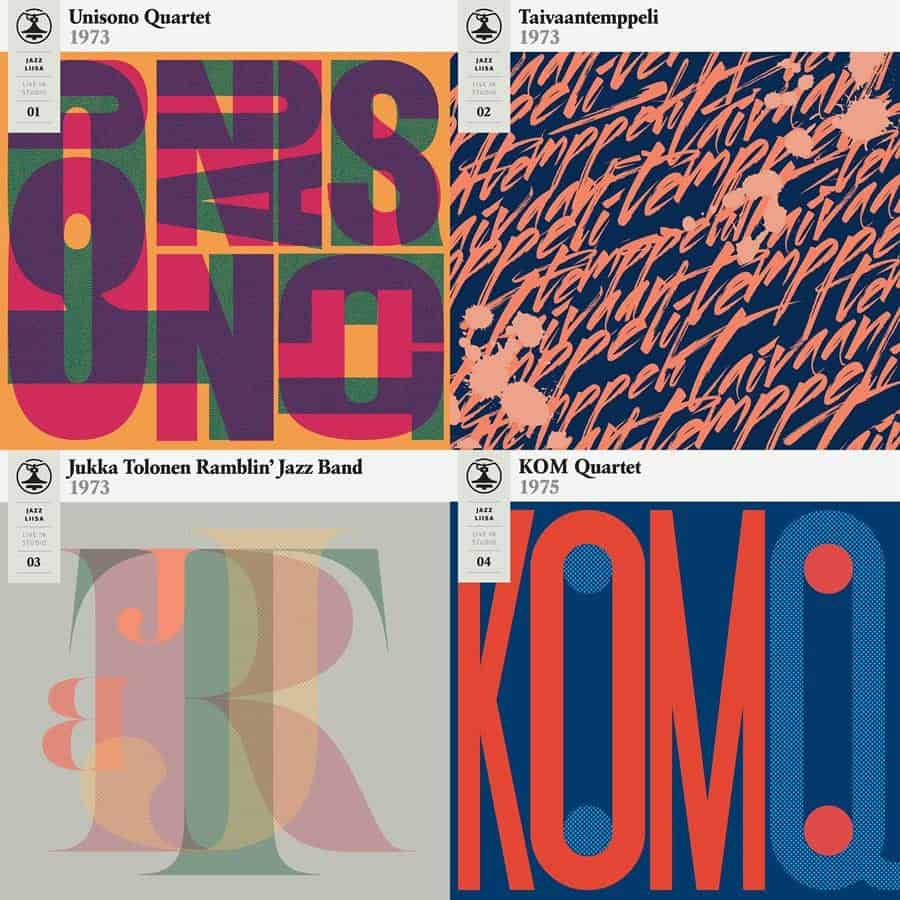 This month Finnish reissue label Svart Records prepare themselves to release remastered tapes from Liisankatu Studios, featuring special edition sessions with 1970s Finnish music legends including KOM Quartet, Taivaantemppeli and Jukka Hauru & Superkings. These bands broke the barriers of genre conventions and brought the Finnish music scene to the world stage. The Finnish Broadcasting Company archives have been thrown open and these rare live recordings have been remastered for Svart to release on brand new 180g virgin vinyl.

I myself have the CD copies to preview so I cannot comment on the sound quality of the vinyl reissues, but from what I can assess through my bass brooding speakers I’m impressed. Released in four editions: Jazz Liisankatu – Live In Studio (01/02) and (03/04) plus Pop Liisa – Live In Studio (01/02) and (03/04) in commissioned artistic packaging, these really are the collectors dream. Beyond the visuals, these releases are a delight. The production on these recordings is exceptional. Gone are the muffles of 1970s recordings, replaced with smooth charismatic tones. Unisono Quartet begin you on the fabulous journey with ‘Long Tandem’, a rumbling jazz melody wrapped tightly together with sombre soprano sax and twinkling piano notes, backed with Taivaantemppeli, whose only live recording features in these reissues. Jukka Tolonen Ramblin’ Jazz Band play to type; they certainly ramble and they certainly jazz it up. Their twenty minute escapades are fruitful and ambitious, with mellow openings and climatic crescendos. KOM Quartet feature come through with bonafide classic ‘Varo Niitä’. The groovy nature is something I’ve never come across before and although the meaning of the lyrics are lost on me, trying to comprehend what they mean through the expressiveness of the music is just as fun and intriguing. KOM followed a distinct political song movement in the 70s and were one of the most interesting groups at the time for breeding a funky fusion of jazz and soon-to-be electronic elements.

Tasavallan Presidentti were a progressive rock act who took on the vivid colour of rock n roll at the time; The Rolling Stones, Led Zeppelin and Pink Floyd are all heard invariably in their shifting sound which was experimental to say the least. ‘Lennosta Kii’ is the song to highlight that specifically. Jukka Hauru & Superkings follow after with calming and seducing glam rock. Its sultry vibe soothes the soul and presents another band pushing the boundaries of music’s meta-genres. The final edition includes Wigwam and Taivaanvuohi. The former brings us our first glimpse of English lyrics in ‘Marvelry Skimmer (Friend from the Fields)’. This feels especially ‘Floyd-ian’ with Jim Pembroke’s stand-out balladry shining through. The latter produce their jazz-influenced rock in ‘Forward Bound’ and heavier tones in ‘Orange County Lumber Truck’.

It is important to understand that each of these bands were all influenced by each other, especially as the members fluttered between one another to assist with concert duties or writing credits. They were all friends and pushed each other’s capabilities to the limits to bring not only Finland but the world some fantastic jazz and progressive rock moments to cherish forever.