Rising UK metallers at the top of their game ahead of album two. 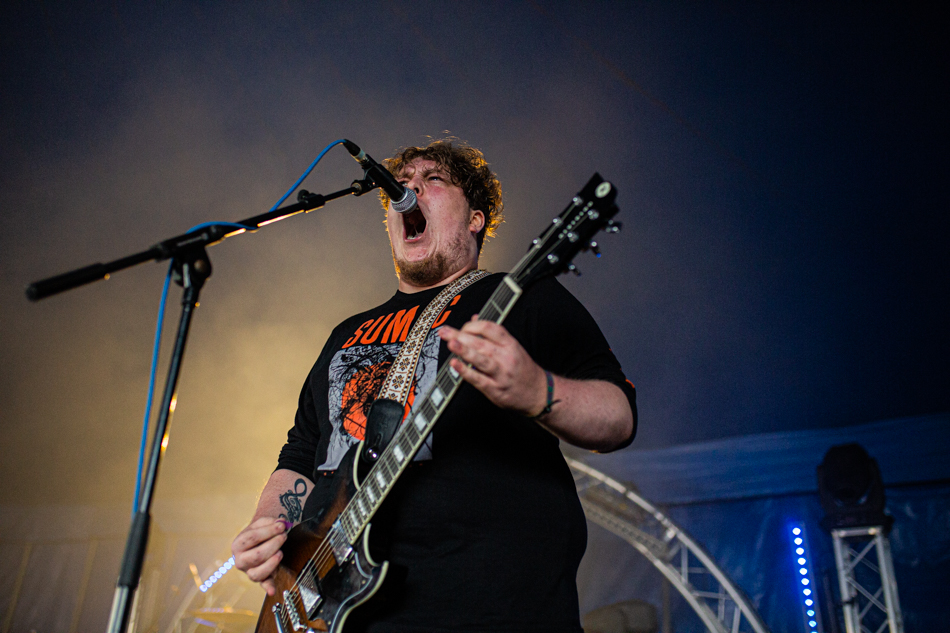 Every time Conjurer go round the horn the crowds get bigger. Tonight the Boston Music Room is packed, and it’s likely their next pass through the capital in support of their upcoming follow-up to debut album Mire will see them bumped up to the higher capacity of the Dome next door. Until then the metal foursome continue to refine the rock solid material of Mire in a live space.

North California bruisers Armed For Apocalypse have the unenviable opening slot, but draw a strong crowd. This is partly down to some typically Stateside showmanship in comparison to the more withdrawn performances on the bill. This is heavy, straightforward hardcore, with frontman Cayle Hunter swinging a headbang practically from the waist in set closer ‘Oblation’, urging the crowd with a raised fist. Drummer Nick Harris is a heavy hitter too, keeping time with hammer blows. They lean into their early billing with full force.

Less fortunate are Copenhagen’s LLNN who are plagued with technical difficulties from the off, as frontman Christian Bonnesen’s guitar cuts out at the close of the first track in their set. Their time is drastically reduced by this setback, and they are only able to rattle off a few tracks. Thankfully they maximise their remaining stage time in a 15-minute burst of taut, confrontational metal. ‘Parallels’ is still a disgusting staccato banger of precision aggression, and ‘Armada’ is delivered with unwavering confidence despite the hitch.

Earth Moves, a kind of supergroup formed of members from We Never Learned To Live, Cloud Boat and Grappler, provide a glimmer of melody in the heaviness, with more emotion in their driving post hardcore. ‘Into the Ether’ and ‘Catatonic’ recall the best of the late noughties hardcore scene, with an eye on atmosphere and storytelling beyond the delivery mechanism of a pummeling riff.

Conjurer’s live show has never been a sloppy affair, but each lug on the drum gets a turn tighter with each tour. While there isn’t any new material aired tonight, fans are treated to an exhaustive run through of practically everything in their recent back catalogue. From the tumbling intro of ‘Thankless’, to the explosive conclusion of ‘Retch’, Conjurer are note-perfect and consummately professional. The moves remain the same: a windmill of hair centre stage, inventive and athletic beats and the dual vocal assault, but the songs feel practiced and performed to a flawless finish.

‘The Mire’ remains the best showcase of Conjurer’s talents, and burns malevolently towards a dramatic machine gun conclusion. Traditional set-closer ‘Hadal’, named after the deepest recesses of an ocean trench, lives up to its namesake with brooding intensity. Though tonight it’s finale status is superseded by a surprise muck-about run-through of Mastodon’s ‘Blood and Thunder’. Conjurer aren’t quite ready to leave the fun of smaller venue shows behind them just yet, but their chops replicating one of Mastodon’s biggest hits could be seen as something of a warning shot to the bigger names on the scene.  On the back of a performance like this, Conjurer could soon be considered one of the UK’s premier metal acts, and sticking the landing on their second album later this year will see them climbing bills behind some of metal’s greats.