“We find this significant in an era marked by the rise of the Right, and the renewal of fascism in an era of the Conservatives’ hostile environment, that has paradoxically made each of us and many of our friends and family again increasingly unwelcome in Britain.”

by Ben Gelblum
in Arts 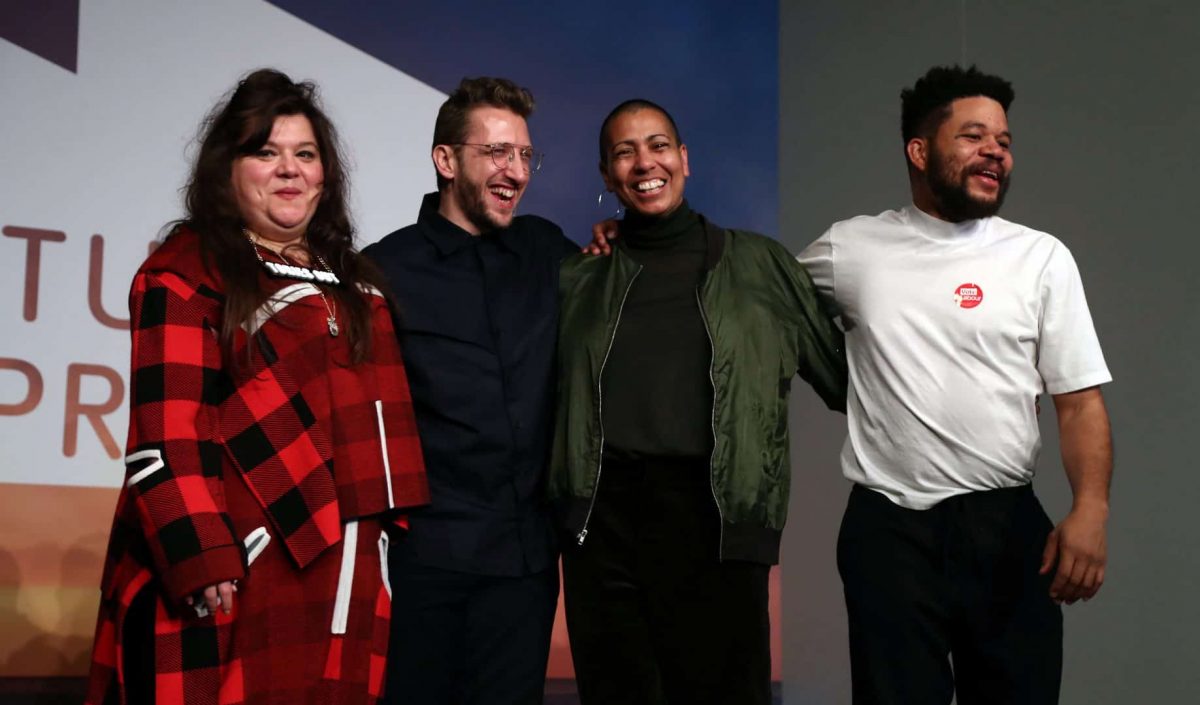 The four winners of this year’s Turner Prize used the glamorous awards ceremony to hit out at “an era of the Conservatives’ hostile environment”.

In a surprise twist for the art world, Oscar Murillo, Lawrence Abu Hamdan, Helen Cammock and Tai Shani took the accolade as a collective, the first time in the history of the prestigious prize.

The news was revealed live on television at an event at Dreamland Margate amusement park in Kent on Tuesday night.

The decision comes after the artists wrote a joint letter to the jury asking that the prize be used as a collective statement of “commonality, multiplicity and solidarity” at a time of “political crisis”.

In a joint statement read out on stage by Helen Cammock, the group said: “After a number of discussions beteen us we came to a collective decision that we, the four nominated artists, are all the winners of this, the 2019 Turner Prize.

“This year the jury have selected a group of artists who are all engaged in forms of social or participatory practice.

“We believe when grouped together such practices become incompatible with the competition format, whose tendency is to divide and individualise.

“Placing in contention the issues in our work would undermine our individual artistic efforts to show a world entangled.

“The issues we each deal with are as inseparable as climate chaos is from capitalism.

“We each seek to use art to push at the edges of issues, mapping the bleed of one into another, across time, across sectionalities, across the realm of the real and the imaginged and through walls and borders.

“This year as it has often done in the past, the prize has sought to expand what it means to be ‘British’.

“We find this significant in an era marked by the rise of the Right, and the renewal of fascism in an era of the Conservatives’ hostile environment, that has paradoxically made each of us and many of our friends and family again increasingly unwelcome in Britain.”

The four artists’ work has been on display at the Turner Contemporary gallery on Margate seafront since September 28.

Oscar Murillo’s paper mache figures are said to represent a mobile and globalised workforce, and the hay-stuffed models have links to a New Year’s Eve tradition in the 33-year-old’s homeland of Colombia.

Beirut-based artist Lawrence Abu Hamdan, 34, is renowned for his work using sound effects to explore society as people perceive it.

His work features a powerful glimpse inside Saydanya, a prison in Syria where inmates suffered torture.

Helen Cammock, 49, looks at the role of women in the civil rights movement that began in Northern Ireland in 1968, including Derry.

The news was revealed live on television at a glamorous event at Dreamland Margate amusement park in Kent.

Audience members, expecting to hear one artist awarded the grand prize, were instead told that all four artists would share the accolade as a collective.

It is the first time in the history of the Turner Prize that the award has been shared between all the shortlisted nominees.

Alex Farquharson, director of Tate Britain and chairman of the Turner Prize jury, said: “In coming together and presenting themselves as a group, this year’s nominated artists certainly gave the jury a lot to think about.

“But it is very much in the spirit of these artists’ work to challenge convention, to resist polarised world views, and to champion other voices.

“The jury all felt that this made the collective a worthy winner of the Turner Prize.”

The regular award of £40,000 prize money is to be awarded to the four artists as a collective, who will then decide amongst themselves how it is divided up.

The artists were greeted on stage by Edward Enninful, editor-in-chief of British Vogue, who presented them with this year’s Turner Prize.

Jurors praised them for their commitment to the collective power of art, and said the decision was “unanimous”.