This production directed by Helena Kaut-Howson and translated by Jeremy Brooks and Kitty Hunter-Blair really is in the anguished lows as it opens the Arcola’s commemorative Russian Revolution season. It’s Maxim Gorky’s best known play, heralds the birth of theatrical social realism, made his name in 1902 but was lambasted by the critics then for […] 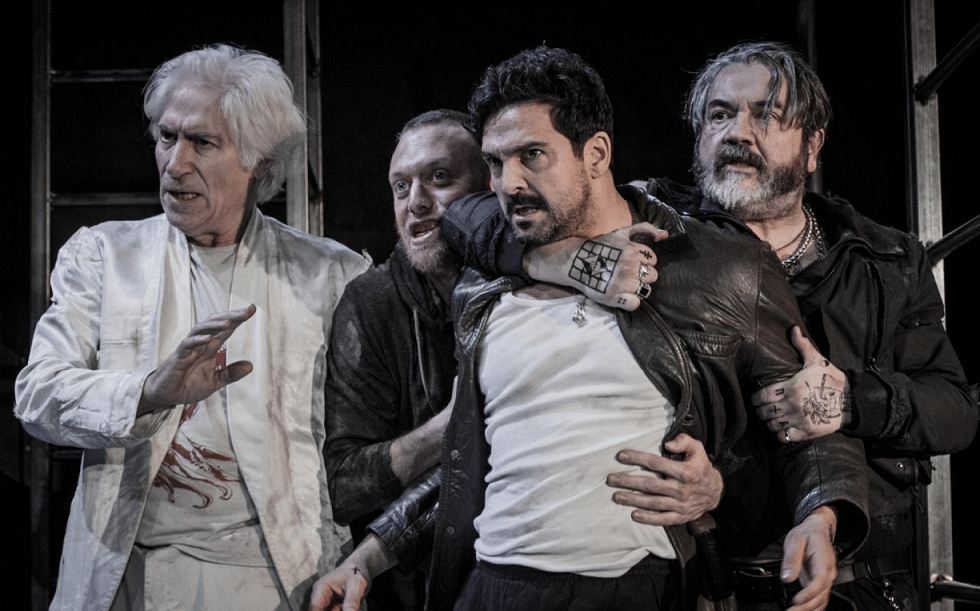 This production directed by Helena Kaut-Howson and translated by Jeremy Brooks and Kitty Hunter-Blair really is in the anguished lows as it opens the Arcola’s commemorative Russian Revolution season.

It’s Maxim Gorky’s best known play, heralds the birth of theatrical social realism, made his name in 1902 but was lambasted by the critics then for its rather despairing and unredemptive avant-garde portrait of those who occupy the “lower depths” of society. Akira Kurosawa made a Japanese version of the play in 1957, but if it is the restraint of that film you are looking for here you will be disappointed. In Kaut-Howson’s urban slum, the riotous group of lodgers do not hold themselves back in either body or in voice so that at times act one and act two’s exposition scenes seem all on one level and lack pace and focus. The problem is exacerbated by Iona McLeish’s prison like set, which, due to the inflexibility of the Arcola’s studio one space, keeps an audience distant from its characters rather than drawing them in, especially if the audience, as most of them have to, sit in the seats side on to the stage. The stage design may be prison like, but where it is, what the landscape outside it is, is less clear: Neil McKeown’s motorway sound effects only serve to confuse the issue rather than enlighten. The costume too does little to help with a traditional mix of contemporary and period clothing. It is harder therefore to connect Gorky’s comment on the economic and spiritual deprivations of Russia’s people at the turn of the 20th century with our own tumultuous times .

However, the episodic nature of Gorky’s writing in this play, about which it is commonly written that nothing much happens, forces the production to settle down and tease out its main theme with the arrival of wandering pilgrim Luka into the slum house. Is it better to give suffering people comforting lies or the truth? Gorky asks as Luka sets about comforting Anna with the Christian teachings that he himself does not believe as she lies dying, and persuades The Actor that he can find somewhere to cure him of his alcoholism and set him on the road to creative success, although such places may not exist. Jim Bywater as Luka is a strange and rightly provocative affair: he is an odd and alluring mix of a hippie version of Compo out of Last of the Summer Wine and an as yet uninvented Ken Loach character with more than a far share of spiritual piety.

As Gorky probably intended, he is as repellent and irritating (he clearly lacks empathy for those who disagree with his philosophy) as he is attractive and audiences will be unable to make up their minds about him. Bywater somehow manages to wear his philosophising interfering duplicity on his sleeve, we see all too clearly his own internal battles as he comforts those with the words they want to hear rather than the words that they should, although the lines of repetition that the character is forced to speak in this translation sabotages the power his words might otherwise have. As The Actor and others including the thief and the landlady’s much abused sister, embrace the belief that they can leave their squalid circumstances behind and go onto better things, so do the audience, hoping that the fortunes may get better for the occupants of the Nizhny Novgorod slum. It does not need me to write here that it nearly does, but does not and it is at this critical moment that this production finally comes alive. Ardent Satin and his friends the Baron and Bubnov argue over the by now disappeared Luka in some of the production’s best and most fluid and enjoyable scenes and it is to Kaut-Howson’s credit that the audience is prevented from empathising or siding with any one of the characters so increasing the chances of a fairer political assessment. “Is it that the lie is the religion of the servant and master and that truth is the inheritance of the free man?” says Satin summing up what is so important about this play. Luka believes that human beings should be comforting barriers that stand between people and harsh reality, but Satin has no time for such compassion, believing in optimistic humanism rather than the need for empathy and understanding.

Jack Klaff as Satin gives a memorable performance and Doug Rao shines as the thief Vesska. Simon Scardifield as The Actor and James Simmons as the Baron all gel well together, but there are some uneven performances which verge on the melodramatic and this makes some character portrayals seem romantic and unreal, something Gorky really wanted to avoid. I also worry about the positioning of Kleshch the locksmith, whose constant unsuccessful work with his tools in act one and act two is an important metaphor, but is probably lost on most of the audience sitting right behind him. The final act of the production is tragic and it is clear that there is room to interpret it in other ways, especially as Luka has an uncanny knack, by way of foreshadowing, of predicting what will happen to everyone in the end.