Exhibition at Newcastle University library forced to cover up 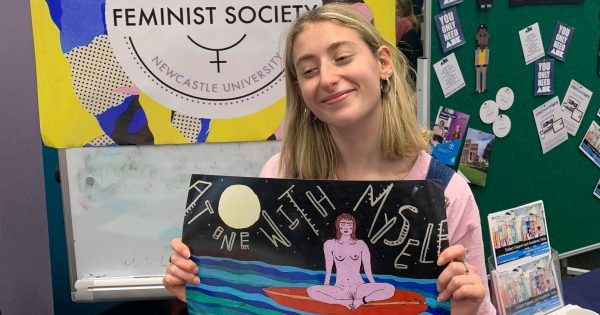 Members of a student feminist society are furious after being ordered to cover up an exhibition of nude art work.

But they were promptly ordered to remove the works, which were deemed ‘inappropriate’ by librarians.

Louise Brown, a third year combined honours student, told The Newcastle Tab: “My art is made to counter sexist attitudes towards women and their bodies.

“In attempting to minimise offence, the censorship of my art only works to perpetuate the patriarchy. Women’s bodies are not offensive.”

Becky Tuck, the society’s President, said in a statement: “It’s a shame because the images were cartoonised and, more importantly, not all images of women are sexual, which is the very point of Louise’s artwork.

“This all, if anything, just proves the necessity of the art, and reminds us of why we need to exist as a society.”

A spokesperson for the university told The Tab that staff intervened because a group of Year 8 and 9 school children were visiting.

“We encourage a range of artwork on campus and are committed to creating spaces for art and performance that celebrates diversity.

“Unfortunately, on this occasion we were approached by FemSoc at the last minute asking for help in providing a space in the Robinson Library for their stall as the strong winds meant they could not display in the open air outside the Students’ Union.

“It was only after they set up we decided it was not appropriate as a group of 8 and 9 year old school children were visiting the library. With more time and discussion in advance we could have happily accommodated them.”