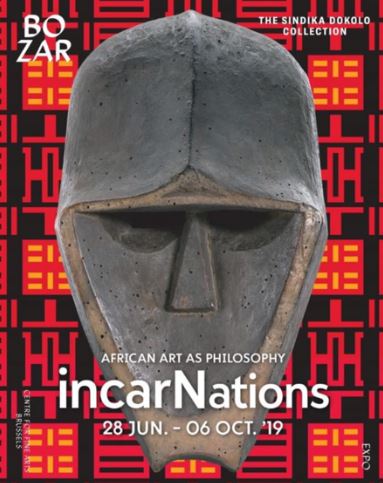 Those visiting IncarNations at the Bozar museum in Brussels may have noticed an unusual addition at the heart of the exhibition: two walls covered with photos of African art smuggled out of the continent.

Writing in La Libre Afrique, Karin Tshidimba describes the scene: “From floor to ceiling, photographs of works of art follow one another, accompanied by small identity cards: description, size, material, origin, region, tribe, locality, name of the artist, period … Some cards are very detailed, others a little less.”

The aim of this space is clear: to remind visitors that the quest to return African art to its homeland is still ongoing.

All the works in the exhibition are taken from Dokolo’s private collection – the largest of its kind in the world. His foundation, the Sindika Dokolo Foundation, was set up in 2006 to help develop African culture and promote contemporary African artists and their art to the world.

Dokolo is a man with a mission, and that mission is to return what was wrongfully taken. Last October, he announced the repatriation of six major pieces of art to Angola, with four more to follow soon.

Speaking with Tshidimba, Dokolo said the purpose of the installation at the heart of Bozar was to create a call to action and show “show that things are progressing so that the restitution becomes something normal. Mindsets evolve.”

Dokolo continued: “We know who owns the works and we know who they are. These are people who have done a lot for African classical art and who have phenomenal collections. Today, we tell them: all we want is to be able to negotiate a moral charter. If they want to sell they give a right of first refusal (right of first refusal) to African collections, including mine… These works are the ghost memory of Africa: this amputated limb that we continue to feel and that continues to make us suffer.”

IncarNations opened on 28 June and will run until 6 October 2019.