Super-skyscrapers which will dwarf the Shard, under water bubble cities and origami furniture are all likely to be reality in 100 years’ time. That’s the verdict of a new study which paints a vivid picture of our future lives; suggesting the way we live, work and play will change beyond all recognition over the course […] 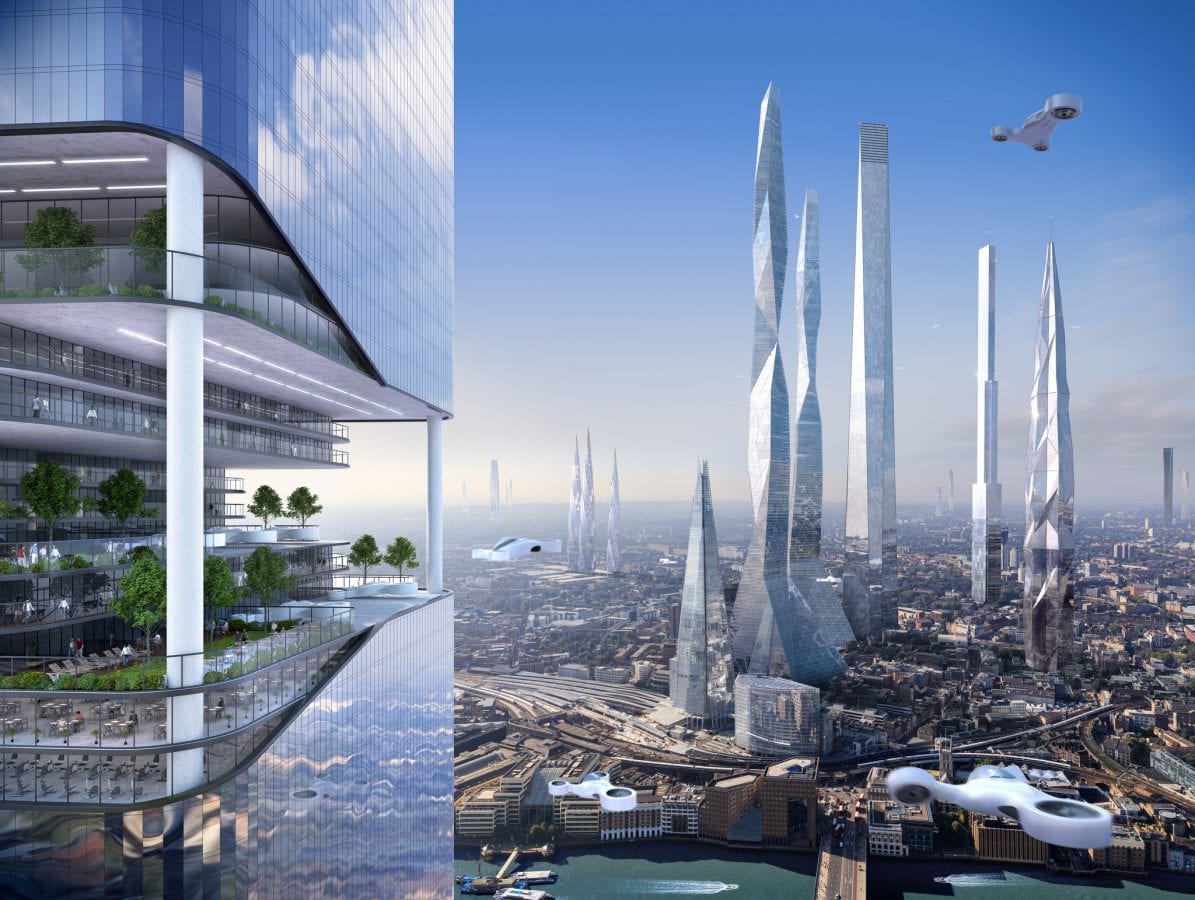 Super-skyscrapers which will dwarf the Shard, under water bubble cities and origami furniture are all likely to be reality in 100 years’ time.

That’s the verdict of a new study which paints a vivid picture of our future lives; suggesting the way we live, work and play will change beyond all recognition over the course of the next century.

The SmartThings Future Living Report was authored by a team of leading academics including TV presenter and one of the UK’s leading space scientists, Dr Maggie Aderin-Pocock, award-winning futurist architects and lecturers at the University of Westminster Arthur Mamou-Mani and Toby Burgess, as well as pioneering urbanists Linda Aitken and Els Leclerq.

The report was commissioned on behalf of SmartThings, a system which easily allows people to make their home smarter, meaning that at any time and from anywhere it is possible to switch on lights, turn up the thermostat or unlock the back door, all via a simple app – something that might have seemed like science fiction as little as 10 years ago, but today is a reality.

The predictions for how we will live in the future have been brought to life via detailed animated architectural renders which show a futuristic London skyline where high rise apartments dwarf Europe’s highest building, The Shard, and show drone transportation and bubble-like under water cities.

As city space becomes more squeezed, we will burrow deeper and build higher with the creation of:

• Super skyscrapers: carbon nanotubes and diamond Nano threads will help us create towering megastructures that will dwarf today’s skyscrapers
• Earth-scrapers: just as we build up we will also dig down – huge structures will tunnel 25 storeys deep, or more
• Underwater cities: are likely to become a reality – using the water itself to create breathable atmospheres and generating hydrogen fuel through the process
• Personal flying drones replacing cars: some of us will be travelling skyways with our own personal flying drones, some strong enough to carry entire homes around the world for holidays

• 3D printing of houses and furniture: we will be able to print exact replicas of large scale structures like houses out of local, recyclable materials so that we really can have all the comforts of home while we are away
• Flexible, smart walls and 3D printed Michelin starred meals: smart walls will mean you won’t need to decorate your home – LED room surfaces will adapt to suit your mood. When it comes to entertaining, there will be no more botched recipes or pizza deliveries – instead we will be downloading dishes from famous chefs that we will tailor to our personal needs. We will be able to 3D-print a banquet or a favourite cake in minutes
• Virtual meetings: our working lives will be transformed with the use of holograms which will allow us to attend meetings virtually, without leaving the comfort our homes
• Stepping into home medi-pods will confirm if you really are ill, providing a digital diagnosis and supplying medicine or a remote surgeon if needed

And finally, we will:

• Colonise space: first the Moon, then Mars and then far beyond into the galaxy On top of looking at how we will live in 100 years’ time, SmartThings surveyed 2,000 British adults to pinpoint the predictions the nation thought were most likely to become a reality in the future.

The survey shines a spotlight on the public perception of the future and suggests that building further into the sky, and colonising oceans are believed to be the biggest future trends as space and resources become scarce.

The top ten predictions for future living:
1. Virtual work meetings – the ability to work from anywhere and attend meetings remotely via avatars/holograms 48 per cent
2. Commercial flights into space 41 per cent
3. Virtual interior decoration so that you can program your own surroundings/ LED walls that adapt your surroundings to your mood 26 per cent
4. 3D printed houses/furniture/food – meaning you can download and print these things at home 25 per cent
5. At-home scanning capsules/pods that can diagnose health problems and administer medicines/treatments 24 per cent
6. Colonising other planets as we use up resources on Earth 19 per cent
7. AI becoming a normal part of daily life – taking over from humans in many industries 18 per cent
8. Giant skyscrapers that can house entire cities: the construction of which is allowed for by the development of new super strong materials 18 per cent
9. At-home hydroponic farms (that don’t require soil) where you can grow your own food 17 per cent
10. Earth-scrapers – buildings that are built down into the ground, so entire cities are subterranean due to space constraints and also to provide further shelter 16 per cent Space Scientist Maggie Aderin-Pocock, who co-authored the report, commented: “Our lives today are almost unrecognisable from those a century ago.

“The internet has revolutionised the way we communicate, learn and control our lives. Just 25 years ago, technology like SmartThings would have been inconceivable, yet today, developments like this let us monitor, control and secure our living spaces with the touch of a smartphone.

“Over the next century we will witness further seismic shifts in the way we live and interact with our surroundings – working on The SmartThings Future Living Report with a panel of industry experts, has allowed me to explore what these could be.

“We are likely to see the emergence of towering megastructures as well as sub-aquatic cities and transportation via advanced flying drones – some of which could be strong enough to transport entire houses on holiday.”

James Monighan, UK Managing Director, Samsung SmartThings, which commissioned the report, says: “The smartphone revolution is already ushering in the smart home revolution, which will have massively positive implications on how we live.

“Our homes are becoming smarter and can now detect the presence of things like people, pets, smoke, humidity, lighting, and moisture. And this is just the beginning.

Just as the technology driving the Internet has spread to smartphones and smart homes, the smart home revolution is destined to spread to larger communities and countries.

By simply turning lights and heating off when we don’t use them, we can reduce emissions by up to 30 per cent.

By being able to better monitor and secure our homes, we can reduce the overall crime rate in cities. By better monitoring the habits of aging relatives, we help them to achieve greater independence and a higher quality of life.”

The report has been published to coincide with the announcement that from the start of 2016, SmartThings will work with hundreds of products from a wide range of brands, as well as working with all of Samsung’s TVs as well as refrigerators, washer machines, ovens, and robot vacuum cleaners.

The full SmartThings Future Living Report is available to read and download at www.samsung.com/uk/smartthings